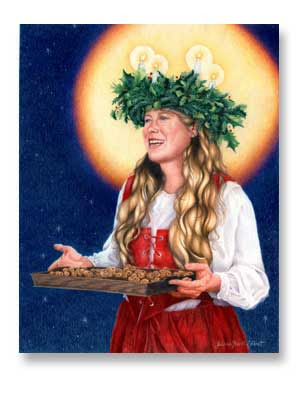 I did not know until a few days ago that St. Lucia's Day (Santa Lucia Day) is celebrated in all of Scandinavia. I thought it was strictly a Swedish custom. Had I known Norwegians observe it too, I would have been celebrating it by going to the local Three Crowns Swedish Club for their annual St. Lucia Day celebration.
Below, I have reprinted part of The Legend of Lucy of Syracuse (Sicily)" from http://www.eldrbarry.net/

"How did a girl who died for her faith in the 4th century AD in Sicily become a symbol of the Christmas season with candles in her hair and a tray of sweet breads in Scandinavia? In between are many legends, and maybe just a few facts.
"Santa Lucia's Day is the first day of the Christmas Celebration in Sweden, Denmark and Norway. On the morning of the 13th of December, a young girl previously elected is dressed up as Lucia in a white gown with a red sash, and with a crown of lingonberry and lit candles on her head. Followed by all her handmaids and some boys called star lads, all carrying lit candles in their hands, she goes from house to house (or just into her parents' bedroom), singing songs dedicated to Lucia, and offering coffee or wine (glögg) mulled with almonds and raisins, saffron buns (Lussekatter), and ginger bread cookies.
"St. Lucia's feast day commemorates the day of her martyrdom, December 13th, which also was the shortest day of the year - Winter Solstice under the old Gregorian calendar. Because her name means "light," many of the ancient light and fire customs of the Yuletide became associated with her day. Thus we find that "Lucy candles" were lighted in homes and "Lucy fires" burned in the outdoors.
"Before the Reformation, Saint Lucy's Day was one of unusual celebration and festivity because, for the people of Sweden and Norway, she was the great "light saint" who turned the tides of their long winter and brought the light of the day to renewed victory. Similarly, Lucia became the patron saint for the "light of the body"--the eyes, which may be the source of legends that she was blinded and her eyesight miraculously restored.
"Over a thousand years ago, King Canute of the Norsemen declared that Christmas would begin with her feast, and last for a month. But how did did this Italian girl who died for her faith in 303 A.D. come to be so revered in in the far Northern lands of Scandinavia?
"Perhaps a clue lays in the tray of sweet breads she carries. A part of the Scandinavian legends about Lucia was how during a severe winter's famine, she was seen with her white robes and halo bringing in a ship full of food over lake of Vänern. A similar miracle deliverance is described in her native Sicily.
"Traditions tell the legend of how there was a great hunger in Syracuse, Sicily, and the town's people had gathered in the cathedral on her feast day, December 13th, to pray, and two ships loaded with wheat arrived, with her at the helm of one, dressed in white, with a halo of candles on her head. This is the explanation given for the cucci, or cooked wheat which is an ingredient in all her festival 's foods. Cuccia, a kind of sweet porridge, is made with wheat berries, chocolate, sugar and milk. Each family has their own versions of this dish. It is thought perhaps Viking traders, who traveled even the Mediterranean seas long ago, may have taken her legends home with them, and that is how Lucia came to the far North.
"Few saints have their own songs, but Lucia has a number of popular songs-some that children sing; one in particular has been recorded by Caruso, Mario Lanza and Elvis Presley."
**********

"Santa Lucia, thy light is glowing

Comes then the morning light,

If you prefer a Pagan slant to this holiday, The Winter Solstice Gallery, http://www.jpc-artworks.com/ says that "Juno Lucina, Mother of Lights, was a goddess of childbirth whose festival was celebrated with torch lights and bonfires in Rome in early December. As midwife of the miraculous Sun Child born at Winter Solstice, it was said she brought children to light." 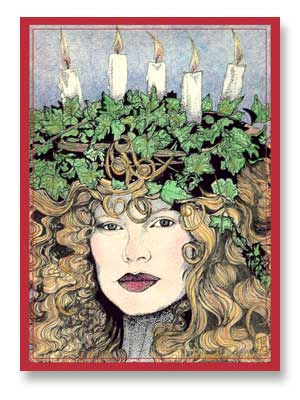 Fascinating post, Julie! I wasn't familiar with St Lucia's Day. I love the idea of candles in the hair although it might be a bit dangerous....I'm sure it looked beautiful though. The picture at the end is gorgeous.

I think it's interesting that you hadn't enjoyed this celebration until you realized that it is Scandanavian and not only Swedish. Are only Scandanavians welcomed there?
I enjoy hearing about and observing the many customs that occur around this time of year.
Thank you for taking the time to share this wonderful post.

I love reading about the Saints! thankyou xo

Beautiful images. I also love the song "Santa Lucia". History is one of my passions. Really enjoying your posts.

Julie thank you so much for visiting me!
I love this blog, I am so fascinated by the whole Celtic thing...I adore ancient traditions and paths...
St. Lucia day is one I knew of, having Danish friends growing up they always celebrated, with the oldest girl as the Lucia Queen...
xo
Gillian

As usual, I learn so much from your posts!
One year we dressed our daughter in a white nightgown and she carried a tray with a candle and the saffron buns for our breakfast on Dec. 13th. We had her Kirsten doll from Pleasant Company wearing the crown of candles and accompaning her.

Hi Julie - I was reading about Saint Lucia on the weekend *!*

Hi Julie
I am from the Soul Food Cafe and as a part of our Advent Calendar I am doing a St Lucia Day. I will put a link to your blog and am wondering if you would mind me showcasing an image that you have used here.
Feel free to contact me at heatherblakey at fastmail dot fm