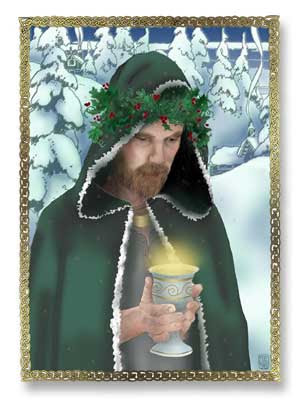 "The figure of the Holly King is a type of Green Man, the British vegetation god. In some mythologies of the changing seasons, the year is divided in half and is ruled alternately by the Holly King and his twin brother the Oak King. Echoes of their battles at midsummer and midwinter are found throughout British folklore, as in the mummer plays of St. George and in the tale of Sir Gawain and the Green Knight."

From “The Mythology and Folklore of the ”:

For most of us the sight of holly leaves and berries is inextricably linked with Christmas, whether we celebrate this as a secular or a religious festivity. Christmas brings with it many traditions and it is probably the one time when many of us still practice at least a few old folklore customs today. Indeed in some parts of holly was formerly referred to merely as Christmas, and in pre-Victorian times 'Christmas trees' meant holly bushes.

Though holly doubtless was, and still is, brought into the house for its shiny green leaves and berries, which reflect the light and add colour to the dark days of Yule, it has another significance as well. Christian symbolism connected the prickly leaves with Jesus' crown of thorns and the berries with the drops of blood shed for humanity's salvation, as is related, for example, in the Christmas carol, 'The Holly and the Ivy'. Yet even here the reference to these two plants refers to a pre-Christian celebration, where a boy would be dressed in a suit of holly leaves and a girl similarly in ivy, to parade around the village, bringing Nature through the darkest part of the year to re-emerge for another year's fertility.

Holly was also brought into the house variously to protect the home from malevolent faeries or to allow faeries to shelter in the home without friction between them and the human occupants. Whichever of prickly-leaved or smooth-leaved holly was brought into the house first dictated whether the husband or wife respectively were to rule the household for the coming year.

In Celtic mythology the Holly King was said to rule over the half of the year from the summer to the winter solstice, at which time the Oak King defeated the Holly King to rule for the time until the summer solstice again. These two aspects of the Nature god were later incorporated into Mummers' plays traditionally performed around Yuletide. The Holly King was depicted as a powerful giant of a man covered in holly leaves and branches, and wielding a holly bush as a club. He may well have been the same archetype on which the Green Knight of Arthurian legend was based, and to whose challenge Gawain rose during the Round Table's Christmas celebrations.

However the folklore of the holly is not solely connected with Yuletide festivities. Like several other native trees it was felt to have protective properties, and there were taboos against cutting down a whole tree. Hollies were frequently left uncut in hedges when these were trimmed. A more arcane reason for this was to obstruct witches who were known to run along the tops of hedges, though more practically farmers used their distinctive evergreen shapes to establish lines of sight during winter ploughing. Apparently the Duke of Argyll even had a prospective road rerouted to avoid cutting down a distinctive old holly in 1861.

Although the felling of whole trees was said to bring bad luck, the taking of boughs for decoration, and the coppicing of trees to provide winter fodder, was allowed. Holly leaves proved to be particularly nutritious as winter feed for livestock, and some farmers even installed grinders to make the pricklier leaves more palatable. Coppicing also allowed the holly's hard, white, close-grained wood to be used for inlaid marquetry and to make chess pieces and tool handles. Folklore suggested that the wood had an affinity for control, especially of horses, and most whips for ploughmen and horse-drawn coaches were made from coppiced holly, which accounted for hundreds of thousands of stems during the eighteenth century.

In Scotland the Gaelic name for holly, Chuillin, appears across the country from Cruach-doire-cuilean on Mull, where the local McLean clan adopted holly as their clan badge, to Loch a' Chuillin in Ross-shire in the north; the town of Cullen in Banffshire may also have derived its name from a local holly wood.

Holly trees were traditionally known for protection from lightning strikes, to which end they were planted near a house. In European mythology, holly was associated with thunder gods such as Thor and Taranis. We now know that the spines on the distinctively-shaped holly leaves can act as miniature lightning conductors, thereby protecting the tree and other nearby objects. Modern science occasionally catches up with an explanation for what may previously have been dismissed as superstitious lore!

"But the hue of his every feature
Stunned them: as could be seen,
Not only was this creature
Colossal, he was bright green

No spear to thrust, no shield against the shock of battle,
But in one hand a solitary branch of holly
That shows greenest when all the groves are leafless;"

"Heigh ho! sing heigh ho! unto the green holly:
Most friendship is feigning, most loving mere folly:
Then, heigh ho, the holly!
This life is most jolly."

Sing we of a mystery, now as long ago
Blood red holly berries, blood upon on the snow
The Oak king shall rise, the waxing year to bring
Therefore bid we farewell to the Holly king

Now in deep midwinter all seems in a trance
Comes the golden Oak King in his age old dance
Comes he to slay, yet honor he does he bring
To his fallen brother the darksome Holly King

In the bright midsummer the year's wheel turned around
Then shall be the Oak King's blood upon the ground
Ever it comes, once more the years waning
Then shall be victorious the Darksome Holly King

Sing we of the Mystery now as long ago
Blood red holly berries, blood upon on the snow
The Oak king shall rise waxing year to bring
Therefore bid we farewell to the Holly king

This post is dedicated to my English friend from "Somerset Seasons", Leanne, whose specially- chosen middle name is Holly. 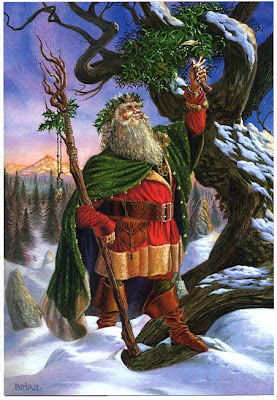 Hi Julie. Very interesting reading. I like the conflict image of the Oak King and the Holly King and see it as representing the turning of the seasons from sleeping to waking to sleeping, and so on. Also, interesting was the idea that cutting down an entire tree was considered back luck but gathering boughs was alright. Gives new meaning to the song - "Deck the Halls" Merry Christmas Julie, AnnieElf

AS you know Julie- I love holly! hence my own several postings! its such a wonderful tree. The hollies in England are unusually sparce with berries this year . thank you for this post, and also for the dedication!

with love and light at the Solstice

Loved reading all this Julie, so interesting - and holly is one of my favorite shrubs followed closely by ivy which is SO easy to grow!
One of my favorite carols has always been The Holly & The Ivy, followed by It Came Upon the Midnight Clear (my Mum's favorite too).

Glad Kristen was handy with the Pledge - hope by now you are doing better and that your can enjoy Christmas with less pain in your hands.

Blessings to you all - will be in touch after Christmas.

Lovely post julie.
I really like the illustrations you chose too.
Love and best wishes for Christmas and the New Year.
hugs
Sheila
xx

I love the old sleeping beauty image in your sidebar. That is one of my favourite paintings and I have no idea who does it.
I love the post on the old folklore-I find it very interesting.
xo
Gillian

Julie I love the images and facts about the holly!I have prepared my centrepiece with a huge bowl of holly branches and pomegranets.
..sending you Christmas blessings to you and yours! I feel blessed in having met you through blogging!
hugs NG

Sending you Festive Joy on wings of love dear Julie

May the joy that comes with Christmas Day remain with you throughout the year!! Merry Christmas dear friend. xoxo

Happy Winter Solstice and a Merry Christmas Julie ~ thank you for the interesting reading, I love learning bits of info like ths.
Sending you hugs...

Julie...hope you are enjoying all the festivities. Sending warm wishes to you and yours.
xx

I am just popping by to play catch up x0 - hope you are getting some rest and relief for your hands - if I lived near, I would come over and give you an energy healing but instead, I will send some angel healing to you in my dreams xoxo

Interesting that the Gaelic for holly is chuillin - in Welsh it is celyn. A local farm is called Plas Celyn, and is supposed to be the site of an Iron Age hillfort used by King Caractacus when he fought the Romans.