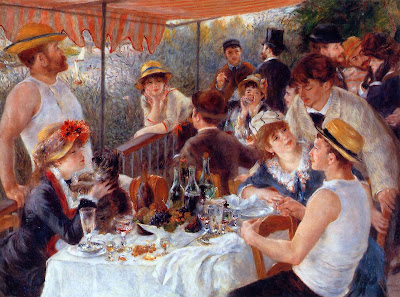 I have been on a vacation of sorts for the past few days, even though I haven't set foot outside of Bismarck. I've been devouring Susan Vreeland's "Luncheon of the Boating Party" after Pierre-Auguste Renoir's painting of the same name. I have been walking the streets of Monmartre or dining on exquisite dishes on the upper terrace of a restaurant overlooking the Seine near Paris.
Of course, I have seen this painting before, but I will never look at it the same way again. Vreeland's book tells how Renoir came to gather these 14 people together for a series of eight sittings en plein air at La Maison Fournaise on the Isle de Chatou near Paris.
Renoir brings these wonderful people and their setting to vibrant life. In the front with her little dog is Alene, the seamstress from the country who falls in love with Renoir. Also in love with Auguste, as they call him, is Alphonsine Fournaise, the restaurant owners' daughter, leaning on the railing. In the rear, holding her hands to her ears, is Jeanne, whom Renoir is in love with. All are based on real people, Vreeland's notes tell us. The only mystery figure is the man watching the woman drink wine. Is he Renoir, or is he the famous writer Guy de Maupassant? Renoir frantically searched to find a 14th person to pose. Thirteen would have been very bad juju, and would have insulted the Catholic hierarchy of France, with its reference to "The Last Supper."
You have two men in their singlets and boaters, obviously just finished rowing. But who is the dapper man in the top hat, looking so out of place? Vreeland has rounded out their personalities so well. There is Helen, the actress at the Folies Bergere, who hopes some day to be more than just a mime. We have Auguste's very good friend, Gustave, himself an artist who is trying desperately to hold the French Impressionist movement together. Meanwhile, Auguste is trying desperately to hold his group together and finish the enormous canvas before he loses the light of summer.
I nearly salivated on my book as I read about the fabulous meals they ate and the wines they drank before they got down to posing each Sunday afternoon. (Boeuf Richileau in Madeira sauce, anyone?) Even the Seine, so pastoral in its rural incarnation, is a living, breathing character. Just the description of someone peeling a peach made me want to throw down the book and run to buy one.
Back in the city, Monmartre is cheerful and gay, with its dance halls, restaurants, musicians and pleasure gardens. But there is a hidden dark side as well. There are the demimondaines and their lovers; the pickpockets and thugs who beat up Renoir. He has many struggles to face before he can complete the painting: He's always scrambling to beg or borrow money to buy paint and canvas and pay models. Somewhat hapless, he has one arm in a cast and then falls off his steam-powered bicycle and scrapes up his face. He has to fire one model and others don't show up. He is rejected by Jeanne and can't make up his mind between Aline and Alphonsine. He has to decide whether to stay with the Impressionists or break away from his dear friends. He rearranges poses, scrapes faces off the canvas, is despondent and hopeless, then finds solutions and is rejuvenated and indeed falls in love with painting again.
It all culminates gloriously in one of the most beautiful paintings in the world. Vreeland describes how Renoir daubs peach on a face here, highlights a white ruffle there, brings in shades of lavender on a white tablecloth to create his masterpiece. But she herself painted a glorious portrait of the bohemian life of Paris in 1881 as she layered on detail after detail. I have read other books by Vreeland in which she imagines the lives of other famous painters. I would say this is HER masterpiece.
**********
Sunday night I told my daughter about this book. She tells me she has seen this painting in person, as it resides in Washington, DC. So now, if and when I ever get back to Washington to visit my daughter, you can be sure I will visit the 14 people who became such dear friends to each other and to me.
Posted by Julie at 5:03 PM

Oh wow, I've seen pictures of this painting many times but never knew the story behind it...how very fascinating!! It's no wonder you were so enrapted with the book!! I love learning the history behind various objects, thank you so much for sharing this one:-) xox

You make me "hungry" for the "Luncheon" book.
I really liked the movie of "the girl with the pearl earring" (another of her books) I think)...it's late and I'm not sure of the title but it was visually lovely!

I've most definitely seen this painting not in person mind you). I have to say reading your review and synopsis of the book was a joy in itself. Your flair for the written word reads, itself, like a novel. I truly need to get back to reading more...my powers of concentration are used doing art during the day...then when I go to read at night I get about 2 pages in and I either drift in thought or drift to sleep.
I need to make TIME just for reading.
Thank you for sharing this.
XOXO

What a wonderful and heartfelt book review! This is a favorite painting of mine, partly because it was on the cover of my French II textbook. But I also loved it because my fabulous Art History 101 professor brought it to life for us.

Hi Julie,
You are the second person in the last couple of days that has written how much you've enjoyed the Renoir book. I will reserve it if I can. He's a favorite painter of mine, and one of my happiest memories was visiting the National Gallery during a special exhibit and MOMA and seeing some actual paintings of his. Thank you for sharing some of the story with us.
You asked about the phlox. I don't do anything special, other than occasionally divide them. I think the old fashioned ones are easier to grow than the newer varieties. I have a few of those too, and they aren't as prolific and seem a little pickier about where they grow, which is a shame, because I have one white one that I love. It's beautiful. Hopefully I will remember to take a photograph while it's blooming so you can see it.
Take care.

I look at this painting differently because of the movie Amelie.

Sounds like a delicious book.Thanks for recommending it.
I have to return some library books today and will see if it's there....I'm ready to start another.
:-)

Ok, with your description I am so ready for this book! It sounds amazing! How wonderful it is to be transported somewhere else suddenly!

Julie Marie: Thank you for giving me more of an appreciation of this painting as I have seen it before!You have given this painting a ~soul~ in the way we look at it now!You read and lived it through reading Vreeland's book and sharing with us!

I thank you also for reading my sad words regarding the~Fallen Angel~ that I posted about..she touched me deeply and I appreciate that you felt the same after reading my post.
I am deeply touched that I am listed under your~kindred spirits~
Hello ~kindred spirit~ it is my pleasure meeting YOU!
hugging you NG

Love the blog on Renior's Luncheon of the Boating party. It's very interesting. However, I always thought that one of the gentlemen in the boaters was Gustave Caillebotte...the gentlemen sitting down. I think I read that somewhere. I am not quite sure where I got that info. It would make sense, since Renior and Caillebotte were friends.