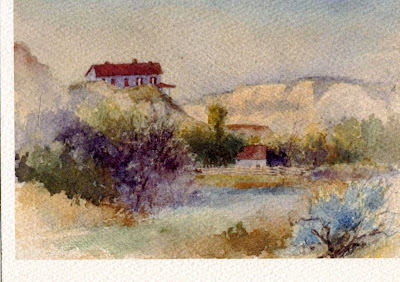 THE CHATEAU DE MORES CIRCA 1885
This card, which is from the North Dakota Heritage Center, is from a painting by the Marquise de Mores. It will soon be winging its way to a new home Down Under, but I thought I would scan it first and tell you a little bit about the Marquise and the North Dakota town that was named for her.

Medora von Hoffman was a New York City socialite who spoke seven languages and was a gifted artist. Her wealthy father established the famed Knickerbocker Club. At her family's winter home in Cannes, Medora met a dashing French cavalry officer. I'm going to print his full name here because I love rolling it off my tongue: Antoine Amedee-Marie-Vincent Manca de Vallombrosa, the Marquis de Mores et de Montemaggiore! However, he was usually called the Marquis de Mores (MORE-ess). The couple married and had three children.

The Marquis had big dreams. He planned to revolutionize the meat industry by establishing a beef-packing plant in the Badlands of southwestern North Dakota. He planned to process the meat there, and ship it to Chicago via refrigerated railroad cars. He named the town after Medora.

The Marquis and Marquise built the house shown in the picture (all you can see of the first story is the porch). Although they called it the ranch, the locals were so impressed by the 26-room house that they called it The Chateau, and that is what it is called to this day. I think Medora really captured the beauty of the Badlands in her painting.

The couple brought their family out to North Dakota for a number of summers. Medora was an excellent horsewoman and sharpshooter, and she accompanied all the hunting and riding parties. She is reputed to have shot three bears on one expedition (not in North Dakota, I think.)

She was also famous for her soirees at the chateau. The parties always spilled out onto the full wrap-around porch, so guests could take advantage of the cool evening breezes and the spectacular view. Medora packed trunks and trunks full of clothes to take with her from New York, and many more boxes of housewares and sundry items had to be shipped too.

The Marquis was a dashing cowboy and gunslinger. He was arrested for murder several times during that rough and rowdy period, but he was always acquitted. He is famous for having challenged Teddy Roosevelt to a duel. Roosevelt, with his nearby Elkhorn Ranch, was also a fixture of the area.

The Marquis' dream went bust, his meat-packing business having lost a war with the beef trust. The Marquis and Medora eventually moved back to France. He worked for the French government in Vietnam and Algeria, and was murdered by Tourag tribesmen in Algeria. Medora died in Cannes in 1921.

The chateau is open for tours today. The male visitors are always impressed by the huge collection of guns, saddles and other accouterments of the hunt. Medora's beautiful blue and white china is still laid out on the dining room table, and there are still hundred and hundreds of bottles of expensive French wine in the pantry. The bedrooms have short beds, as people at that time (at least the wealthy) slept propped up. Medora had her own boudoir and the Marquis shared a room with his (male) secretary. The downstairs bedrooms opened onto the porch. The children and maids, of course, slept upstairs.

I never get tired of touring the chateau, and afterward I always sit on the porch and try to imagine the life of a maverick Frenchman and his socialite wife on the frontier.

If anyone would like a card showing this bit of North Dakota history, email me your address and I will send you one.
Posted by Julie at 11:51 AM

love the painting at the top! off to read the post xo

Oh I so enjoyed reading the history behind this chateau!! I love visiting places like that and like you, always wonder how it would have felt living there at that time. I would love a card...I'll email you my addy:-) xox

Delighted to see your kind comments on the Chateau de Mores. It is especially kind of you to send the pictures to your readers. We will celebrate the opening of our new interpretive center in late April 2008 with two days of special programming including portrayals of the Marquise and others. During the season we have special tours for seniors on Tuesdays and children on Wednesdays. Come see us!

Delighted to see your kind comments on the Chateau de Mores. It is especially kind of you to send the pictures to your readers. We will celebrate the opening of our new interpretive center in late April 2008 with two days of special programming including portrayals of the Marquise and others. During the season we have special tours for seniors on Tuesdays and children on Wednesdays. Come see us!