THE LADY OF SHALOTT - PLUS GIVEAWAY 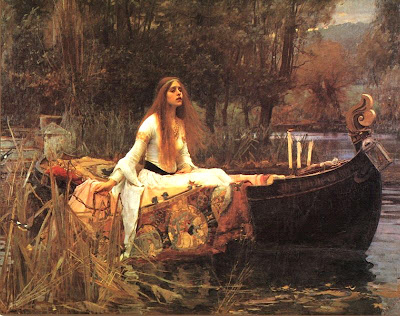 Here's another lady that intrigues me - and a giveaway after the poem.

Labels: The Lady of Shalott

I love the lady of shalott and have a huge picture of her in the boat hanging over my couch. I havent heard fo the tape you mentioned but would be interested in seeing it so please put my name in for the drawing.

Joe bought me my very first Loreena Mckennit CD on the weekend. absolutely divine!
I love the Lady of Shallot...love, love love.. xoox

It is a great poem. I love Loreena McKennitt, so please add me to the draw.

Oh, I would love, love, love to be the lucky winner.

I still remember the first time I heard about Loreena McKennitt back in the mid 80's...if I recall, her first album was called Elemental. I love her Celtic style and we Canadians are very proud of her:-) I haven't heard her musical version of The Lady of Shallot but I'd love to!!! xox

This is a lovely post, Julie, and I'm a huge Tennyson fan. Thanks for sharing.
p.s. How'd you like Miss Potter?

Wow love that poem. I couldn't begin to tell you why I love her music. She just has such a great voice and it is like it calls to me. Please add me in the draw.

OK, I have never heard of Loreena but I LOVE the picture of Lady of Shalott.

Loreena is like someone from another land, another time. Her music can be haunting and then like a lullaby beautiful. for as much as I love her music I do not own one of her CD's - soon to be remedied.
The Lady of Shallot is beautiful and that is one of my very favorite illustrations by the way!
XOXO

The Lady of Shallot always reminds me of two other sad and tragic ladies - Ophelia and Desdamona. I've never heard of Loreena McKennit but judging from the comments, it would seen that she has many fans around the world.

I am a long time fan of Loreena's I have The Mask and the Mirror, The Visit, Parallel Dreams and the Book of Secrets. I have never seen her perform, even on TV but would love to. This DVD sounds wonderful please put me in your drawing.

I've just started getting into music by Loreena McKennitt and this is one of my favourites :-)

my new CD is called "Book of secrets" - oh I love it.. I played it all the way to visit my mum and all the way back. what is it about the music that is so hauntingly familiar?

Lorena rocks! Julie please do not include me! I just couldn't help but saying that I love her! and her voice is divine! I think Annieelf needs to learn about her, LOL

I have always loved her! Her music is so beautiful. Her album, "the book of secrets" has been playing in my son's (who just turned 3 yesterday) cd player in his room for nap/night time since the day he was born! I also love the poem and her song of the highway man.

Thank you for the contest!

Loreena has the voice of an angel to me..I can go into a trace like state when I listen to her somewhat haunting sound...it goes right to my soul...of course I have to turn the volume.I think I'll pull ~The Visit~
CD out and listen..perfect for the mood I have been in since Freddi passed away. hugs NG