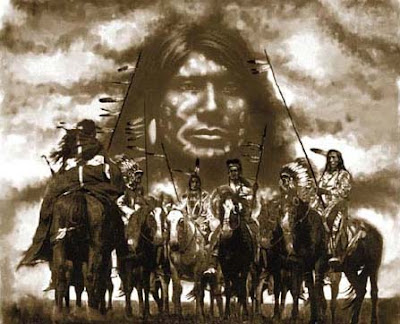 "The Journey of Crazy Horse", by Joseph Marshall III, was not the book I wanted to read about the famed Lakota warrior, but of course that is my fault. I wanted to learn more about Crazy Horse as a visionary and mystic. According to Marshall, Crazy Horse had just the one great vision as a young man (which did come true and which was a prophecy of his death).
It was a poorly written book, leaping back and forth from one time period to another and bogged down with descriptions of many battles, not only with the white man but with the Lakotas' enemies like the Crow. I had gotten to the part of the book where Crazy Horse finally goes to the agency and I realized I hadn't yet read about the Battle of the Little Bighorn, in which Crazy Horse and Sitting Bull, along with their warriors, defeat and kill George Armstrong Custer (Yellow Hair.) I flipped back some pages only to discover that this famous battle was described in the book, only it was called Greasy Grass, and there was no mention at all of Custer.
However, it was a good book if one wants to learn about the period that changed the life of the Plains Indian forever. When Crazy Horse was a young man, he seldom saw a white person. And by the end of his life at age 33, as we sadly know, the white people had come in numbers "like the stars."
When I was a child, I always wanted to be a cowboy in games of cowboys and Indians. Now, I am all on the side of the Indian. Crazy Horse, who was the last holdout of the Lakota chiefs when it came to giving up their way of life, saw his people sell their land, not for beads, but for blankets and beef.
I learned that Crazy Horse often spared the lives of his Indian enemies because to the Lakota, battles were about courage, not about killing. It was only when Crazy Horse realized that the whites fought to kill that he had to respond in kind.
Crazy Horse was indeed the stuff of legends, a courageous warrior and brilliant military strategist. He had one great love whom he had to give up twice because of tribal politics. He was a good man and good husband to his second wife, and greatly loved the daughter who died at a young age.
He cared deeply about the welfare of his people, which is what, in the end, brought him to the agency and his death. A Lakota warrior not only fought battles, he also had to hunt to feed his people, unlike the white soldiers who could devote all their time to Indian fighting. If you want to read a book about the heyday and the death of a culture of people, then read Marshall's book.
Okay, off my soapbox and on to the other books:
**********
"Blessings," by Anna Quindlen, is about a ne'er do well young man who learns to take care of and love an infant he finds abandoned at his employer's estate. Never judge a book by its cover, Quindlen gently reminds us - neither that of the young man, or that of the crotchety old woman he works for. Like all of Anna Quindlen's books, I highly recommend it.
**********

"The Virgin Suicides," by Jeffrey Eugenides. I recently saw the movie on TV with Kirsten Dunst and Josh Hartnett, and while it was okay, I had the nagging thought that something was missing. Sophia Coppola is trying to convey something here, I thought, but it's not quite all there. So, I ordered the book and indeed found there was much more depth to the story of a group of neighborhood boys who are in love with five sisters who all eventually commit suicide. On the strength of this book, and on the recommendation of Carmen from Strawberries and Champagne, I bought Eugenides' newest book, "Middlesex" with my Barnes & Noble birthday gift certificate from my husband.

"Mockingbird", by Charles J. Shields, is a biography of Harper Lee, or as she was known by everyone, Nelle Lee. (She didn't want Nelle Lee listed as the author of "To Kill A Mockingbird", because she didn't want people to call her "Nellie.") So, Nelle she is (I have to keep reminding myself that she is still alive), a Southern woman to the core, feisty, wry, witty, grounded in her community, and of course, the author of my favorite book of all time. I learned much about Harper Lee, including the knowledge that she should have been given co-authorship of Truman Capote's "In Cold Blood." But Capote, a childhood friend (and Dill in "To Kill A Mockingbird,"), betrayed his friend with a kiss - a limp little dedication in the book that made him famous. This book, I think, satisfyingly answers the question on every one's lips: "Why did Harper Lee never write another book?" I, however, do not care that she did not publish again, because to me, "To Kill A Mockingbird" is utterly perfect and forever enough.

I cannot proclaim the excellence of "The Girls" enough. I picked it up at a good price at Wal Mart, not knowing much about this book by Lori Lansens except that it was about girl twins conjoined at the head. Because I want you to discover this truly great book by yourselves, I am not going to say much about it except that I loved the "The Girls" and the girls themselves: Ruby and Rose. Oh, especially Rose.
Posted by Julie at 4:17 PM

Hope you are having a great Fourth of July..!
You are an avid reader..!
I only managed two in June, one of which was a re-read of Apple Tree Lean Down, I will finish it tonight. I also re-read Peter Mayle's A Year in Provence.
I loved To Kill a Mockingbird, and have read it many times. A fabulous book, even the film was good, and so often they are not.
xo

I haven't read any of the books you mentioned but I was interested in reading your thoughts on them! I've heard of Crazy Horse but have never really heard his life story...it really is sad the kind of life that indians were pushed into when the white man arrived. Here in Canada, our government is forever at odds with the native people...they promised them certain things and are not following them up so I don't blame the natives for being upset! xox

You are such an avid reader! thank you for sharing your insights and opinions!
I am reading "Eat, Pray, Love" by Elizabeth Gilbert. I am truly enjoying it....(I think I like memoirs...seeing how someone else's brain handles the "stuff" of life!)
I enjoyed reading about your "art in the park" evening. Wish I could have been there! My good friend "sallybee" just came home from a trip to North Dakota. She is from Stanton (and she reads your blog!)

To kill a mockingbird is my favorite of all the time, I was 12 yrs old when I first read it.
One interesting fact, I have read it many times but never in English, Today I am headed to the library to get it in English!
And thank you for the list of books, I am going to do buy some, the new ones for sure.
You are such a fantastic storyteller and inspiration.

I cannot believe how much you read...I have a stack of to-be-read books and a list of more I'd like to get. For some reason my ability to concentrate on a book fully has been limited lately. I need to settle my mind and stop thinking of all that needs doing and just RELAX with a good book now and then.
Thanks for the reviews.
XOXO

Wow ...so glad you are doing this. So many of us love to read....it's good to get recommendations.My reading list is getting longer.
xo