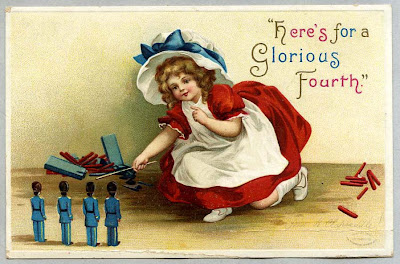 Because my sister has to work today (she's an RN), we drove over to Mandan last evening for Art in the Park - art, crafts and FOOD! Just by chance, we happened on the Dolls and Pets Parade. Mandan has a gigantic parade on the Fourth, but I am so glad we happened on this instead.
Tons of kids marched in the parade, headed by an impromptu band of four preteen boys with their trumpets and drums. The little girls carried their dollies or pulled them in wagons, while the little boys rode their trikes, one resembling a John Deere Green tractor. They were all so proud, and such little troupers, as it was a hot evening.
The best part of the show for me was the pets. Either people are really tending toward owning smaller dogs, or they just don't think big dogs and parades mix well. I have never seen so many dachshunds in one place in my life. I wanted to scoop them and other precious little puppies up and take them home with me.
Several little girls had rabbits, and one had a little chicken. It was bigger than a baby yellow chick, but not fully grown. And it escaped, right at the corner where we were standing. Several people, including me, scurried around to cry to catch the chick, which was finally corralled and put back in its carrier.
What I liked most is that the parade featured the youngest children. I am sure the older children and teens will be riding on floats or marching in today's parade, but yesterday's parade was just for the little 'uns. And thanks to their moms, a lot of the kids - and the dogs - were dressed in variations of red, white and blue.
Art in the Park, they say, is for "eating and meeting", and it is so true. My sister kept running into people she works with. While we were eating - having finally made the decision of what to eat from among the myriad food booths - I mentioned that I hadn't seen anyone I knew. That comment opened up the door, as from then on we kept running into my friends or mutual friends of ours, and we chatted so much we didn't leave the park until 9:00 p.m. And yes, both of us found a couple of treasures to take home.
Posted by Julie at 9:19 AM

Just love childrens parades. We have them here too....funny how 4th of July brings up crazy things like bed races, donkey baseball, and hot dog eating contests.
xoxo
Have a happy day

Happy 4th of July to you and yours, dear Julie Marie:-) Sounds like that was a fun parade to watch...I've never heard of a kid and pet parade but I think I would prefer to see that than any other normal parade! lol xox