DANU OF THE IRISH 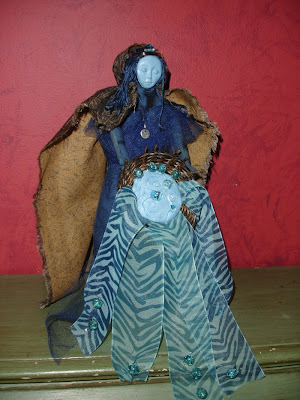 DANU, RIVER GODDESS
I am the proud owner of Danu, created by Lila at Indigo Pears. When Lila first posted her creation, I fell in love with her. Lila first made Danu as her interpretation of a Celtic goddess in an art doll exchange. She made another doll and posted it on eBay, and I was the fortunate one to purchase it.
Here's how Lila describes Danu: "Standing in the swirling mists from waters, she pours the rivers of the world as they bubble up from her basin. Her cloak is evocative of leather and straw or grass...as she is also the goddess of agriculture and cattle.
I did a little research on Danu before I purchased Lila's doll and that research clinched my decision to buy her. I have always intuitively felt I was of Irish descent but did not know it for sure until two years ago when I learned the identity of my birth father and found out he was half Irish. I was always drawn to the Irish, but finding out that I actually was Irish through HIM made me extremely bitter because he abandoned my mother before I was born. I have been trying to heal this wound through exploring my Irish heritage. Here's what else I found out about Danu:
"Danu is the oldest Celtic Goddess, known also as Don [Welsh]. Her influence spread far across the British Isles and Europe, where the Danube river was named for her. Few stories about Danu have survived, and yet the reverence in which she was held still remains. It is told that those who worshipped her, the Tuatha de Danann (the children of Danu), retreated into the hollow hills of Ireland when Christianity overcame the old ways. There, they became immortal, the Sidhe or fairy folk, and Danu's legend lives on as the Goddess of fairy ways. Danu is the power that is in the land, never to be overcome by mortals. And her power is in the imagination of those who see magic in the twilight mist between the worlds." (http://www.lunea.com/)
Another site said that Danu, also called D'Anu and Dana, is the Mother Goddess or matriarch of the Tuatha de Danann and that all of them are descended from her. About the Tuatha de Danann, one learns that they originally lived on the "islands of the west" (however, some say they came from Norway), and had perfected the use of magic. They traveled on a big cloud to the land that would later be called Ireland, and settled there.
They conquered the Fomorians, a race of giants who were the primordial inhabitants of Ireland. They also defeated the Fir Bolg, another race that inhabited the country, but they were kinder to them and gave them the province of Connaught. Eventually, the Tuatha de Danann were conquered as well, by the Milesians. They went into the underworld, "into another dimension of space and time." Now known as the Sidhe (pronounced shee), they are invisible to humans, except for a very lucky few.
**********
Danu, mother, queen, life giver
Your sweetness is the salt kiss
where ocean meets land.
You are the wellspring of fertility,
Queen of all Sidhe,
shining jewel of Ireland.
I am enveloped in your mist,
your loving embrace,
a child come happily home.
**********
Those words were written by Katrin Auch, but I feel as I could have written the last three lines. I do feel enveloped in Danu's mist, her loving embrace, and I am a child come happily home to the seat of some of my ancestors, Ireland. That is why Lila's Danu will always have a prominent place in my home.
P. S. I am in the process of thinking about a Spirit Doll thanks to Robyn's challenge. At first I wasn't even going to consider making one, being extremely untalented in the area of fabrics and sewing, but I am pondering ideas. I am taking a spirit doll class in September, but I might even make one before then! She might be a Prairie Goddess, since I have never seen one of those. She will definitely have some sort of connection with nature and the place I live. I already have a sage bundle for her to carry, and some powdered rose petals in a bag to symbolize the prairie rose. That's as far as I have gotten.
Posted by Julie at 8:04 AM

Lovely, lovely!!!!
You are a child of Ireland and of Danu!

You will have a joyful time making your prairie rose spirit doll. I can sense that she is growing and will emerge from the mists herself, very soon!

I really enjoyed reading this, it's so interesting and the poem is lovely. I've been exploring the world of the Celts for a few years now. It's fascinating and full of wisdom. Like you I have little talent in the sewing department so it's never even occurred to me to try to make a spirit doll. If you do one then maybe I might try as well:)

I do too own one of Lila's creations and aren't they fantastic!
I am so glad you got your Goddess, too.
Beautiful!

I'm of Irish, Scottish, German and Austrian descent. But have never done any real research on any. Except for trying to research William Wallace.

"...Europe, where the Danube river was named for her. "

How interesting! To learn something like this, after all these years.

"There, they became immortal, the Sidhe or fairy folk, and Danu's legend lives on as the Goddess of fairy ways."

Oh I love all about the Faerie Folk.

Beautiful Danu doll! By coincidence, I did a mask-making workshop last week where we called in a diety to work with. Danu came to me and she had a BLUE face, just like your doll! She also had brilliant star-burst eyes, and another woman in the class said she had worked with Danu before and seen the same star-burst eyes!

Danu has a wonderful healing, magical energy. I'm so glad I now have my mask of her... and that I can also recognize her in your doll!