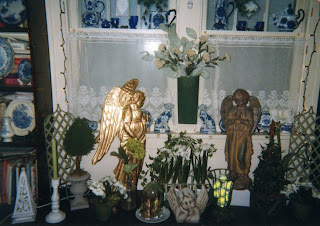 The FIRST day of Christmas is December 25, I tell them. There are 12 days of Christmas and they last until Epiphany. I usually keep my Christmas decorations up all through January, because when you take the time to put up enough decorations to fill 10 Rubbermaid totes, and you don't finish decorating until Christmas Eve, you want to appreciate them for a while.

I feel guilty for not putting up my Dickens' Village this year. It's such a chore, even though Dan loves it. However, I now realize that I was extremely foresighted not to do so, because new puppy Gracie would have torn it apart.

Herrick's verse reflects the superstition that traces of greenery left in the home after Candlemas will bring death among the congregation before another year is out. I've also read that the sprites that inhabited the woods became extremely angry if greens were left in the house too long.

I think I'm safe! There are no longer any fresh greens in my home. The Christmas tree is gone, the wreath is too. The poinsettias were tossed and the beautiful purple carnation and greens centerpiece is a goner.

But I do leave my collection of glittery white Christmas houses and bottle brush trees up longer. This year I scored a coup by finding a wonderful example of the cardboard house, at Wal-Mart of all places. Enclosed in a dome, it is larger than the ones pictured below. I absolutely love the frosted Christmas moon that I discovered at a flea market.

I also set up my winter garden, shown above. It features white flowers and frost-covered greens. There's ivy, potpourri under glass, topiaries, cherub statues, my prized "graveyard" angel, beaded green pears, a couple of small trellises, and a white amaryllis, white roses and white narcissus (fortunately silk, because I abhor the smell of real narcissus). This year I scored a couple more pots of narcissus, which were a steal at 75% off. I'm also keeping my eye on some white tulips, crocus and lilies of the valley that I've spotted at a store. But they won't come home to my winter garden unless they are deeply, deeply discounted.

After a while, Christmas reds and greens become jarring to the post-Christmas eye. But I think this color combination of green and white is fresh and clean and worthy of being on display until it's time for the pastels of Easter. 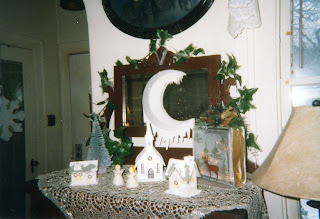