IN MY COMFORT ZONE 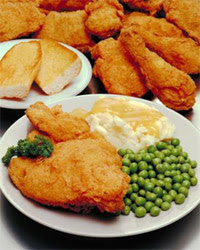 MY FAVORITE COMFORT FOOD MEAL OF ALL TIME: FRIED CHICKEN WITH MASHED POTATOES AND GRAVY. DAN USUALLY MAKES THE CHICKEN AND POTATOES NOW, BUT THE GRAVY IS ALL MINE. I MAKE IT WITH NICE CRISPY PAN DRIPPINGS AND CHICKEN BOUILLON. HOWEVER, I PREFER TO SERVE THIS WITH CORN INSTEAD OF PEAS. 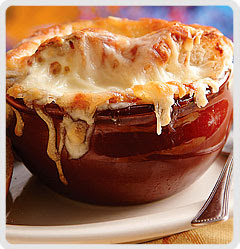 THERE'S NOTHING LIKE FRENCH ONION SOUP WITH A NICE, CRUSTY TOPPING OF BREAD AND CHEESE! I USUALLY ONLY HAVE THIS IN RESTAURANTS ANY MORE, BUT I USED TO MAKE THIS AT HOME, EARLY IN MY MARRIAGE. LATER, DAN AND I MADE THIS WITH CROSS AND BLACKWELL FRENCH ONION SOUP, BUT THE STORES HERE DON'T STOCK IT ANYMORE

MY FRENCH BISTRO POTATOES LOOK EXACTLY LIKE THE ONES PICTURED ABOVE

I find little enough to like about winter, but I do love the comfort foods we gravitate toward during this time. On Saturday evenings, we like to make gourmet dishes. On Sunday evenings you'll find us creating dishes that speak to the soul, perhaps to reward ourselves for having to get up and face a new week of work the next morning.

One comfort dish that doesn't make it to our table is macaroni and cheese. To my husband, it comes too close to being a casserole. A former Navy medical corpsman and physician's assistant, he's eaten too many casseroles in bad hospital cafeterias his lifetime. So I leave mac and cheese off our menus - it's the least I can do for him - but I used to love my mom's homemade macaroni and cheese with generous pieces of bacon.

There's something about the lightly browned top of an oven baked mac and cheese dish, or a cup of French onion soup overflowing with cheese that stretches in long strings from your spoon. Because of that reason, I love my French bistro potatoes. I watch them carefully and cover them with tinfoil just at the right moment. I never, ever let them get too dark. I almost hate to break their golden and sinfully creamy crust.

Following is a recipe for these potatoes. Whenever anyone asks me for a recipe, I give them this one. You won't find many recipes on this website. My husband does most of the cooking and does it well. He could own his own restaurant if only he was good at the business end of it. But this dish is all mine. It's very simple, with only four ingredients. But it is sumptuous. The only problem is that you can't reheat it the next day, because the cream turns to butter.


Slice potatoes and divide them into two groups. Crush the garlic pieces and rub them onto the sides and bottom of a 9 x 13 pan (I prefer ceramic pans). Layer the pan with half the potatoes. Top this with a layer of half of the cheese. (At this point I like to finely chop the previously-used garlic cloves and scatter half over the cheese.) Cover with a layer of cream. Repeat with a second layer of the potatoes, cheese, garlic and cream. Be very generous with the cream!

Bake at 350 degrees for about an hour, checking to make sure that the cheese does not get too browned. At this point, cover with aluminum foil and put back in the oven for another 30 minutes.