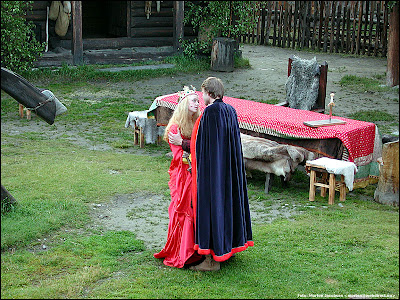 THE LIVES AND TIMES OF MEDIEVAL NORWAY ARE PERFECTLY CAPTURED BY SIGRID UNDSET IN "KRISTIN LAVRANSDATTIR"
Judy, one of my book club friends, kept a record of the books she read last year, month by month. Her total at the end of the year came to just over 100 books. In my earlier years, I could have read that many books and more in a year. Now that I stare at the computer at work all day long, my eyes don't allow me to read as much. Nevertheless, I am going to keep my own log for 2007. January's total is pretty small, because I have been doing so much blogging and scanning ancestral photos for my cousins and photos of my daughter for her collection.
MY JANUARY BOOKS:
"The Ladies' Man" by Eleanor Lipman
"The Thirteenth Tale" by Diane Setterfield
"Kristin Lavransdattir I: The Wreath", by Sigrid Undset
"Kristin Lavransdattir II: The Wife", by Sigrid Undset
"Kristin Lavransdattir III: The Cross", by Sigrid Undset

As a person of Norwegian descent, I knew of the Undset trilogy, but had never read it. I certainly had seen it featured in North Dakota bookstores, at the Norsk Hostfest and at Sons of Norway meetings, but had never felt the urge to pick up a copy. This past November, I rented Liv Ullmann's movie version of "Kristin," and I was hooked. The movie covers only Part I, so I was eager to continue following Kristin's saga. For most of January, I felt immersed in the lives and times of 14th Century Norway.
I understand why "Kristin Lavransdattir" was awarded the Nobel Prize for literature. It is truly epic in scope, while also telling the tale of a single person. It shows us a woman in all three stages of life - from maiden to mother to crone - set against a backdrop of political intrigue, Catholic religion mixed with pagan beliefs, Scandinavian traditions and customs, family and ancestral obligations, societal mores, and the landscape of the Northern World. I had never been exposed to a novel in which a person's spiritual life was so much more important than the secular life (a commonly-held view in Medieval times). What a contrast to my life and that of my contemporaries.
Kristen's struggle with God is always at the forefront of her story. By constantly dwelling on her sins and on her husband, Erlend's, failures, she never truly enjoys the moments of her life as they are happening. At one point, another character chastises Kristin because she keeps harping on her sins, never believing herself to have been truly forgiven. "Exactly!" I thought, "you tell her. " To use very modern vernacular, I kept thinking as I read, "Kristen, get over it and get on with it."
Yes, Kristin Lavransdattir is a flawed character, but she is also an intriguing mix of the spiritual and the carnal, of defiance and compliance, love and hatred. She is, at various times, careworn and carefree, devoted to her family or indifferent and selfish, a woman who can't live with Erland, but also can't live without him.
Whether standing tall and proud, or brought low, whether the queen of the manor or the shoved-aside mother-in-law, whether a spirited child or an overburdened mother, Kristin Lavransdattir is "of whole cloth", and that's what makes this 1200-plus page trilogy so compelling.
Posted by Julie at 9:12 PM