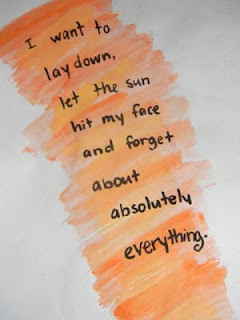 Really? Really? Haven't I been through enough in the past year and a half? The first - and worst - that happened was that Dan was diagnosed with cancer. He went into remission a year ago April and we had a not-too-bad summer. Then, in the fall, I started having problems with my "lady parts" and had tests for uterine cancer, cervical cancer and ovarian cancer. I sweated through the results, which all turned out to be negative. I ended up having surgery and thought all was well.
I started having abdominal/pelvic pain and nausea around Christmas time but didn't tell anyone. Then, at the end of January Dan went instantly and profoundly deaf. Shortly afterward, he was diagnosed with a brain tumor.
As regular readers know, Dan's condition deteriorated swiftly. He was put under hospice care and passed away on March 23.
What I hadn't written in my blog is that I was having a terrible time at work and suffered extreme emotional distress over it.
Finally, the work problems got better about the end of April. Although I was fighting all kinds of red tape to try to get Dan's Social Security and other monthly income transferred to me, I was slowly recovering from his death.  I took time to go to my family doctor for my tummy problems and after a CT scan it was determined that I had a hernia - caused by my prior surgery.
I make an appointment to see a surgeon. He's a great guy - I like him and trust him and we decide I should have surgery May 17.  Okay, fine, just another thing to get through. I booked two weeks off at work and arranged for Gracie's care during my overnight stay.
So there I was Friday morning. My sister had picked me up at o'dark thirty. I had been poked for labs and was sitting in my (not) pretty hospital gown, already getting fluids via IV. That's when the bomb dropped. They said they had to cancel the surgery because my blood platelets were so low. My surgeon admitted me to the hospital and called in a medical doctor to run a bunch of tests.
Your blood platelet count should be no lower than 150,000. Mine was at 49,000. The doctors were concerned that my count had fallen so low so quickly because they were at low normal when I saw my doctor in April.
They took enough blood to satisfy a vampire for six months. They decided I didn't need to sit around in the hospital waiting for results so they sent me home at 5:00. I will be seeing a hematologist in about a week.
There could be a lot of reasons for low blood platelets - or the official term, thrombocytopenia. It could be as simple and fixable as a vitamin deficiency. Or, it could be worse. So here I sit, playing the waiting game yet again.
Really? Really? Haven't I been though enough lately?
﻿
Posted by Julie at 9:57 AM

Oh my dear one - such trials you've had. My heart goes out to you. And even if the answers to your drop in platelets is an easy to fix answer, still the waiting game is the worst thing possible. I really dislike waiting - hope the answers come in soon. I will send good thoughts your way - often and sincerely. I put a little angel on the table near me, and whenever I look at it I will think of you. I know the waiting game - I went through something similar 6 years ago and the not knowing is the hardest part. Please keep us informed when you can.

you have Julie and it is a tribute to your strong character that you have survived it all. I am praying for favourable results for you, as you deserve some good news XX

Be Well, my brave friend!
Praying with you.
love & love,
-g-

Oh, I am so sorry about the loss of your husband. And now your health matters. Sending prayers and positive thoughts your way. (((Hugs)))
Mary

I am so sorry to hear of this Julie! You have been through enough already. I hope everything turns out well an it's just a matter of low iron. My heart goes out to you. ((((hugs)))

Oh dear Julie, I'm so sorry to read that you are having such health problems. Be assured I'm sending healthy, supportive thoughts across the pond to you.
{{hugs}}
Rose H
xx

Oh, sweetie, I am so sorry to hear of this new trial. I will be sending the best of all possible energies for a positive outcome. Lots of hugs coming your way and let us know how you are doing when you can.

oh Julie. wish i could give you a hug. I cant believe youve now got something else to deal with. Here's hoping the blood results come back quickly, and are just a simple deficiency caused by all the stress of late. Thinking of you, and sending love and prayers

I hope your day was a quiet one with with your daughter. Sending you hugs and strength.