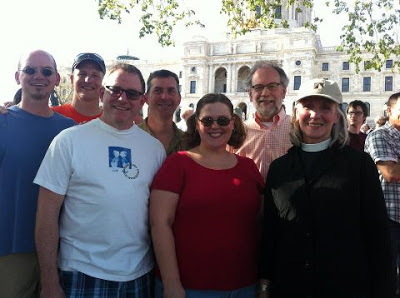 Congratulations to my cousin, Kevin (white shirt,) and his husband, Will (behind him to the right) on the marriage equality bill being signed in Minnesota.
Kevin and Will have been through a civil ceremony in Iowa and a religious (Lutheran) ceremony in Minnesota, and they say two ceremonies are enough, but congratulations to all the other gay Minnesotans who can now marry and have equal rights under the law with any other couple.
A comment posted on Kevin's Facebook page:

Christopher Hoven: And if Hubert H. Humphrey were alive today, he'd probably say, "My fellow Minnesotans, today we have stepped out of the dark shadows of state's rights and have walked into the bright sunshine of human rights, of civil rights!"
I have power over comments and will not allow any gay-bashing ones on this post. It's time to come out of the Dark Ages, people. Please don't tell me God loves the sinners but hates the sin. God doesn't think homosexuality is a sin. And guess what, that guy in the red and white striped shirt? He's a pastor. 'Nuff said.﻿
﻿
Posted by Julie at 6:17 PM

I read a long time ago that statistically, same sex couples stay together longer than traditional couples. Congrats to the happy couple!!!

Congratulations to your cousin and to Minnesota as a whole. My uncle died too young to benefit from these changing times. Maybe, if this had happened 30 years ago, he and his long term companion wouldn't have split up under the pressure.

Congratulations Kevin and Will, firstly on becoming a married couple, I hope you have long and happy lives together, and secondly on this wonderful news, that at last, recognises that all couples are entitled to formalise their union.

Many congratulations to the happy
couple! It's about time humans came out of the middle ages - if you love and care for one another, what's the problem?

Hope you are well - thinking of you often.