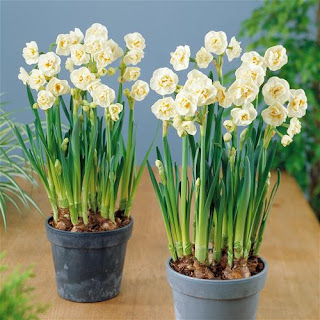 ~ Nina Bagley
Isn't that a wonderful quote to describe the ragtag end of winter? It was written by Nina Bagley (Nina with an 'I'), a fabulous blogger and jewelry artist who lives in a rural area in the mountains outside of Asheville, NC.  If only I could write like she does, I would be an extremely happy blogger.
NIna's blog is called "Ornamental" and it is listed (with a direct link) on my sidebar under Friends and Kindred Spirits. The quote above is taken from her March 2 post called "Grey Day Inspiration". In it, she describes how a simple walk by the river inspired her to create a piece of her beautiful jewelry. I urge anyone who is interested in the creative process or emotion-tinged writing to read this post and peruse other posts on Nina's blog.
~~~~~~~~~~~~~~~~~~~~~~~~~~~~~~~~~~~~~~~~~
My indoor bulb garden, which I mentioned in my last post, is coming along famously. I still have a lot of mini yellow daffodils, plus the blue hyacinth. I also now have some beautiful red tulips (in the blued-red tone that I prefer) and a pink hyacinth, and grape hyacinths (muscari) are peeking up through the soil. The mysterious bulbs I mentioned in the last post turned out to be precious double white narcissi with golden centers, very much like the Bridal Crown variety shown in the above photo.
I can't ﻿remember when I've enjoyed an inexpensive purchase so much. This bulb garden has given me a great deal of pleasure during this "departing gunnysack skirt tail of winter". With these visual, scented wonders, I can wait for the emergence of the bulbs I planted outdoors last fall.
I only hope that all the bulbs I planted come up. The one downside of having a mild, virtually snowless winter is that there is no moisture in the ground. Not being an experienced bulb grower, I don't know if that means my bulbs won't come up - or will they flower because they have what they need stored in the bulb? Any bulb gardeners out there, please let me know.
If they do come up I will have yellow jumbo daffodils; pink, yellow and purple single tulips; and pink, white and purple double tulips. Only time will tell, but with the winter being so mild, we may just have an early spring.
The temps are forecast to be in the 50s today and tomorrow, in the 60s Saturday and Sunday and pushing 70 by Monday. The little bit of snow remaining will soon be history. For once in my life I may see tulips and daffodils blooming in March!
~~~~~~~~~~~~~~~~~~~~~~~~~~~~~~~~~~~~~~~~~
Tonight is the March full moon. I hope you are able to see it - we should here because it promises to be clear tonight.

Native Americans called this the Full Worm Moon, because as the temperatures begin to warm and the ground begins to thaw, earthworm casts appear, heralding the return of the robins. The more northern tribes knew this moon as the Full Crow Moon, when the cawing of crows signaled the end of winter, or the Full Crust Moon, because the snow cover becomes crusted from thawing by day and freezing at night.

Early settlers knew it as the Full Sap Moon, or Sugar Moon, marking the time of tapping maple trees. They also knew it as the Lenten Moon, and it was considered to be the last full moon of winter. Other names for the March full moon are Fish Moon (Colonial America), Big Famine Moon (Choctaw), Sleepy Moon (China), Windy Moon (Cherokee), Chaste Moon (English Medieval) and Moon of Winds (Celtic).

The Dakota, or Sioux, who roamed the prairies of North Dakota, called the March full moon the Moon When Eyes Are Sore From Bright Snow (but they wouldn't call it that this March!).

But the moon isn't the only skywatching show on offer tonight. Jupiter and Venus, for example, are drawing closer and closer together in the sky, on their way toward a rare conjunction on March 15. For the next few days, Mercury will join them, visible a bit lower in the sky.
Skywatchers with binoculars may even be able to see Uranus just below Mercury, and the dwarf planet Ceres — the largest object in the main asteroid belt between Mars and Jupiter — nearby.

AND, if you live in a rural area where you can see the unobstructed night sky, look to the north tonight and see if you can see the Northern Lights, or Aurora Borealis. Because of the storm taking place on the sun, they may be spectacular right now. Yes, sun storm. An intense solar storm erupted Tuesday, sending billions of tons of solar plasma streaking into space. These particles have begun hitting Earth's atmosphere already, and they should cause supercharged auroras close to our planet's poles - both North and South.

For more information on these celestial events, plus photos and maps, go to: http://www.space.com/14839-full-moon-mars-planets-skywatching.html.
Posted by Julie at 11:00 AM

We're too far south to see the lights, but there is a full moon gathering to celebrate International womens day.

I remember so clearly seeing the northern lights when was just a young girl. I was living in northern Wisconsin at the time. Remembering it still makes me sigh.

Thinking of you and your husband. Hope your bulb garden is gladdening his heart and helping him through this trying time.

Wonderful post - so much to think about. Your bulbs sound wonderful - I think next year I am going to try to get one of those little gardens someplace.

We are promised more rain, heavy winds and clouds so no moon or planets or northern lights viewing for us. I do love a good windstorm though, so I'll enjoy that.

I hope your bulbs all do well. i don't know how much moisture they may need! Your mystery bulbs are fabulous!
i have one amarylis which has been growing very slowly all winter and may bloom before May.or not. It is in a sunny south window!

Dear Lady,
I like your aristocratic title!!! So glad to see that Dan is doing so well. John has him on his prayer list and we both send healing powers your way.
Your bulbs should be fine and enjoyable, unless some animals ate them over the winter, especially the tulips!! Daffodils are already blooming here in Philadelphia.
Enjoying your posts immensely, copying the recipies and making and Irish dinner today (Sat) and Sunday.
You both keep well, I love the way you enjoy the little things.
Blessed Be
Lawrie