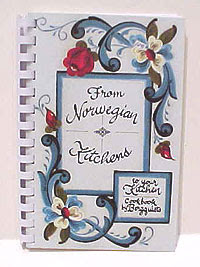 For most of the year, ﻿I natter away on this blog about how proud I am to be a Celt of the Scottish and Irish persuasion. But I'm also half Viking, a Norse, and I'm proud of that too. And at this time of the year I'm all about being Norwegian. Because Norwegians certainly know how to "do" Christmas.
In times past it was said that a proper Norwegian housewife should have seven different kinds of cookies on hand to serve her Christmas guests, be it for afternoon coffee or after a holiday meal. There are a number of lists on the Internet for these seven cookies, but frankly I had never heard of some of the cookies, and I was raised in a Norwegian community!
These lists differ among themselves too, so I thought I would present my own list from memories of my childhood and what I have discovered as an adult. So this is Julie's List of the Seven Different Kinds of Norwegian cookies:
1. Krumkakke (pronounced KROOM ka ka, also spelled Krumkake or Krumkaka)
2. Sandbakkels - or Sandbakkelse (Sand Tarts, pronounced SAAND bockles)
3. Rosettes
4. Norwegian Almond Cookies
5. Ginger Cookies
6. Fattigmand (pronounced FOTTY mun, meaning Poor Man)
7. ﻿Spritz
The "trouble" with a lot of cookies on the list is that they require special tools or tins to make them. My Grandma Julia's family didn't make any of these cookies. I don't know if it's because my Scottish Grandfather had told my Grandma that "We're in America now, and the Norwegian part of you must go away", or words to that effect. Or perhaps they didn't have the money to buy the special tins or tools.
But why bother to make them when you could buy them? By my time (and that was after Grandpa's time), you could go to any cafe in Crosby and come home with a big box of assorted Norwegian cookies. You had to handle the box very carefully, as some of the cookies are very fragile.
In coming posts, I am going to write about the 7 kinds of cookies, starting with Sandbakkels. These cookies need special tins, which can be obtained from Scandinavian import stores on the Internet. 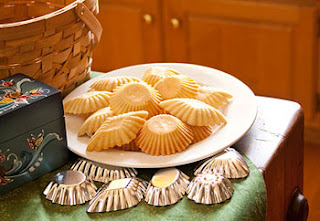 When I was growing up, we only saw the round sandbakkel tins. I see they have branched out with other shapes since then.
Below is just one recipe for Sandbakkelse, taken from the cookbook shown at the top of the post, From Norwegian Kitchens to Your Kitchen, compiled by Bergquist Imports in Cloquet, MN. You can find this cookbook on the Bergquist website as well as other Scandinavian import store websites. You will also see the older, "vintage" edition available used on amazon.com and eBay.
All the recipes I feature will be from this ﻿cookbook, but you can find hundreds of similar recipes on the web by Googling Norwegian or Scandinavian Christmas cookies. It is said that Norwegian cookies are made with "butter and love", and it is certainly true about the butter part! You will note that a lot of them feature the same or similar ingredients. It's the presentation that makes them different.
SANDBAKKELSE
3/4 cup sugar
1 cup butter (not margarine!!)
1 egg
1 cup finely chopped almonds
1 teaspoon vanilla
2 1/2 cups flour
Cream sugar and butter. Add egg and dry ingredients and mold into sandbakkelse forms. Bake in 300 degree oven until golden brown.
We always ate them plain and I was surprised to learn that other Norwegians fill them with a creamy filling or fresh fruit, fruit filling or jam and dab them with whipped cream. Who knew? But we always thought they were just great, plain. 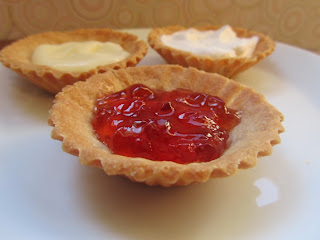 Supposedly my Scottish blood comes from north Scotland, (which is called Sutherland because it's south of Norway!). With my blond hair and blue eyes, I fit right in. Of course, anybody with English, Scottish or Irish heritage has a high likelihood of turning up a Viking branch on the family tree. They did get around. My closest link to Scandinavia is a great aunt by marriage named Sigelinde ("Aunt Shuge") but her claim to fame was that she had pomegranate trees on either side of her front gate, which my dad used to pilfer pomegranates from to use the seeds for ammo in his pop gun.

OH what a deliciously wonderful post. I can't wait to hear about the other cookies. I've seen those little tins from time and wished I needed them - now maybe I do - so I can try out the cookies. I am of English and Native American decent and in our family we had our own traditions but not anything of nationality origin - mostly cookies that were made in Russia, since I grew up in a town in Alaska (Sitka) which had once been the Russian capital and so there was a lot of Russian influence in the holidays.

Happy to have found your blog via Pinterest pin on these seven cookies. I too make seven cookies each Christmas. Even goes as far as having a seven cookie party. Norsk influenced friends bring their favorite dough and then we bake them up and share while drinking glogg. Lots of fun.