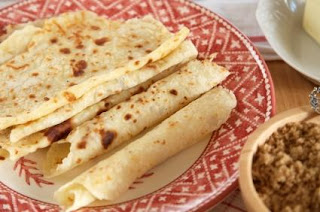 It's Christmas time, so it must be lefse time! As any "good" Norwegian-American will tell you, lefse (LEF-suh) is to us as the tortilla is to the Mexican. It's a traditional soft flatbread made out of potatoes, milk or cream, and flour, and cooked on a griddle.

"In Norway women would travel from house to house spending three or four days making up to a year's supply of lefse for the household. They would often work over an open fire and by lantern light into the evening. The finished rounds were stacked in barrels. Rounds were also stored in kistes (sea chests) or steamer trunks for fishermen packing provisions for long sea voyages. Often, the shed where this baking took place was also the place where beer was made."

Although Dan and I buy our lefse from the store, there are still people in our family who make huge batches every year. Dan's mom and dad used to be the lefse makers. They are now deceased, but Dan's older brother Dick, his wife Bonny, their daughter Lisa and her kids get together every fall on a day set aside as lefse-making day. 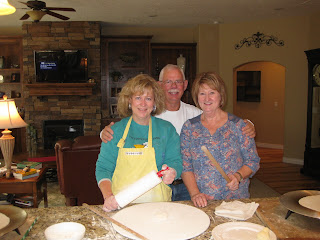 LEFSE MAKERS EXTRAORDINAIRE!
DAN'S BROTHER DICK, DAUGHTER
LISA AND WIFE BONNY﻿
In doing so, they are following a Scandinavian-American tradition, as lefse consumption in the United States is most popular around the fall and winter holidays beginning with Thanksgiving. Making lefse as a group is definitely a more enjoyable activity than making it alone! Such gatherings also provide training in keeping the tradition alive for younger generations.

The town of Starbuck, MN, is the home of the world's largest lefse. In some parts of the United States, including Minnesota, North Dakota, South Dakota, Iowa, Wisconsin, Oregon and Washington, lefse is available in grocery stores. Norsland Lefse, a factory in Rushford, MN, produces about a half million rounds of lefse each year.
﻿ 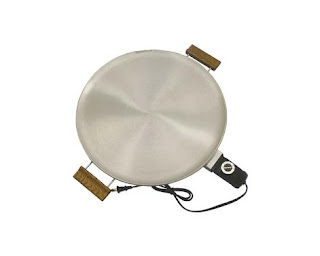 LEFSE GRIDDLE
Lefse is especially celebrated in cities and towns with large Scandinavian populations. Fargo, ND, hosts the wildly popular Lobster and Lefse Festival in August each year. Fosston, MN, invites area lefse makers to compete for the title of Champion Lefse Maker at its Lefse Fest in November.
﻿ 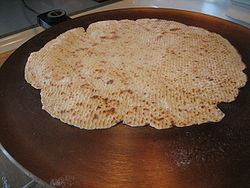 LEFSE ON THE GRIDDLE
There are many ways of flavoring lefse. The most common is adding butter to the lefse and rolling it up. In Norway, this is known as "lefse-klenning". Other options include adding cinnamon and/or sugar, or spreading jelly or jam on it. Dan's family always enjoyed lefse with homemade chokecherry jelly (which is more like a sauce than a jelly).

I found the following information on the Internet and most of it is news to me: "Scandinavian-American variations include rolling it with a thin layer of peanut butter and sugar, with butter and white or brown sugar, with butter and corn syrup, or with ham and eggs. Also quite good with beef, and other savory items, it is comparable to a thin tortilla." 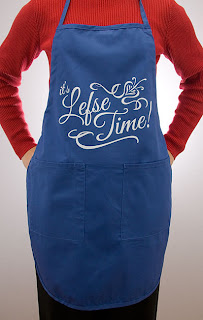 Lefse is a traditional accompaniment to lutefisk (LOOTA-fisk), which is codfish preserved in lye. While many Norwegian-Americans profess a great love for lutefisk, I find it to be a very stinky, repulsive, quivering jelly-like mess. Actually, everyone finds lutefisk to be smelly. Often served at Lutheran church basement suppers, lutefisk sends out an overpowering aroma that is enough to knock out anyone in the building. Fortunately for non-lutefisk eaters, they always serve Swedish meatballs too.

There's a song about lutefisk set to the tune of "O Tannenbaum" which begins like this: 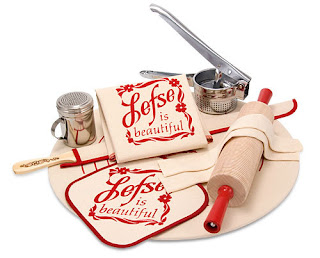 "LEFSE IS BEAUTIFUL" SET
A lefse griddle is about $100.00. There are also many special lefse-making accessories to be found on the Internet, such as the "It's Lefse Time" apron shown above. The "Lefse is Beautiful" set, directly above, consists of a pastry board and cloth, turning stick, rolling pin, potato ricer, rolling pin covers, flour dredge, lefse cosies and hot pad, $85.00. Sometimes the end of the turning stick is painted with rosemaling, a type of traditional Norwegian folk art. However, a yard stick will do as well! 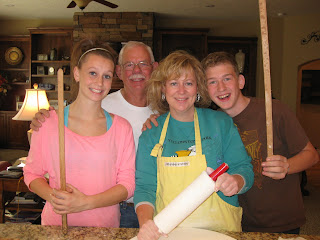 LISA AND DICK WITH LISA'S TWO YOUNGEST
CHILDREN, LESLIE AND PATRICK.
ROLLING PIN AND PADDLES, READY!
Here's just one of many  hundreds of lefse recipes available, from the "From Norwegian Kitchens to Your Kitchen".

Mix the mashed potatoes while still lukewarm and add the salt, cream, sugar and shortening. Cool. Add enough flour to make a soft dough. On a floured board, roll the dough thin, turning as you roll to make an even round and to keep from sticking on the bottom. Bake on lefse grill. (Some people prefer to rice rather than mash the potatoes.)

To store the lefse rounds when cool, fold them in half and then in half again and wrap in cellophane wrap. 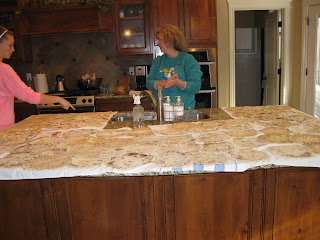 ﻿
THE END RESULT. DO YOU
THINK THEY MADE ENOUGH?
Posted by Julie at 4:03 PM

Wow - so interesting - I had no idea what it was - though I've seen the name often enough (lazy researcher here LOL) Now I think I might want to try some - can I cook them on my round cast iron griddle?

My dad had an Aunt "Shuge" (as in "sugar" -- her name was Siegelinda). I'll have to ask him if she ever made Lefse. (I know his mother used to make potato pancakes with left over mashed potatoes.)