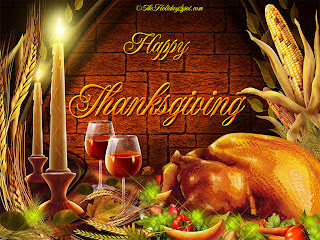 I am truly blessed. I hope you all are too. Happy Thanksgiving.
Posted by Julie at 4:13 PM

I am very late with Thanksgiving greetings, but hope you and your husband had a nice one! Good luck with the car, and job! I will be thinking of you! I, too, will be hiding out in my cozy home on Friday, away from the madness of shopping chaos! Unbelievable these commercial blitzes! Take care!

A lovely post Julie.
You might enjoy this one at the blog of oone of my followers, who lives in Ireland
http://aheronsview.blogspot.com/2011/11/faery-at-large.html

Great post - we all need to think along these lines. Things do work out.

Julie, Happy to hear your weather has been cooperating this fall. Indeed there is much to be thankful for. As always I send warm thoughts your way.
xx gma

A belated Happy Thanksgiving to you! So glad to "see" you here again. I, too, stop & appreciate the holiday at hand, wouldn't dream of going out shopping on Black Friday! We did buy our Yule tree today but it will stand, undecorated, until tomorrow evening at the earliest.

Way to keep you head high lady!! You are a true soldier witch! I'm glad you had a great Thanksgiving, and I am willing to bet you can will your winter to be fabulous! Hugs to you :)

I hope you will look back on THIS November and a happy one floating in a sea of not so fond of Novembers. Thirteen months of work; what a blessing. And family ALL together at Christmas. The hope for another assignment because of a good economy. Awesome for North Dakota. Hope the car fix turns out to be fast and easy and not a money pit.

Advent blessings to you and yours, Annie

my blog is currently unavailable while i tweak things. Send me an email to somersetseasons@hotmail.co.uk
with whatever email you prefer to use and I'll send you an invite to have access again. all will be explained later.

Hugs to you Julie! I hope your car is holding up!
You certainly have a great Christmas to look forward to, as well as many other things for which to give thanks!
I too wonder at what people think they "need" so badly that they rush out to find it on Black Friday...a quiet weekend was had here, not shopping!