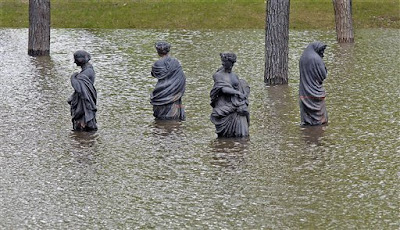 Diana: ﻿"Athena, I seem to have wet feet!"
Athena: "More than my feet are wet, Diana!"
Diana: "I think we need to evacuate. Hestia, follow me!"
Athena: "Come, Aphrodite. We'll go the other way!"
Just me attempting to put a little levity into a very ﻿serious situation. This conversation among four Greek goddesses immediately came to mind when I saw the photo in the Sunday Bismarck Tribune. (All photos are by the Tribune or submitted to the Trib's website.)
These statues are in a private garden in the Fox Island area of South Bismarck. (I was amazed to see such classy statutes in Bismarck, definitely a non-posh town.) The photo was taken May 28. As of today, June 1, the flood has not officially arrived and the water hovers at just under the 16-foot flood stage.
That is good news, and is caused by the amazing fact and welcome fact that the river is "scouring" itself out. Because the water is moving at such a fast clip (7 to 8 times faster than it usually pours through Bismarck), the river is dredging its own bottom and is therefore capable of holding more water. 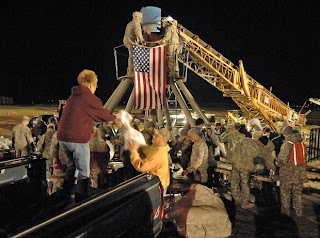 That's the good news. But the flood is still coming. It has merely been postponed. Bismarck-Mandan has just been granted a little extra time to prepare. The bad news is that there was more heavy rain in Montana in the past few days and the Corps of Engineers will up the cfs release level to 100,000 by the end of today and will be releasing 150,000 cfs by mid-June. Remember just a few days ago when I said that 105,000 cfs was an astronomical number? And, for the first time ever, the spillway gates will be opened at Garrison Dam. The Army Corps of Engineers hastened to say that this does not mean that they have lost control of the river; they still maintained that this is a planned, controlled release.
Individuals, city officials, the ND National Guard, the Corps, the governor, our senators, and other cities in ND and Minnesota are doing everything they can to fight this thing, with sandbags, basket dikes, concrete barriers, ring dikes, dirt and clay dikes. Sandbagging sites are being operated around the clock. The goal is for four million sandbags to be filled by Thursday.  People of all ages from little kids to 70-something women are pitching in to help. 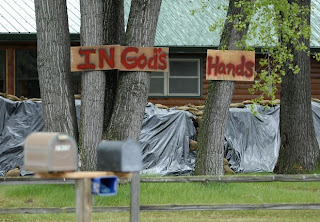 ﻿
City officials are confident that they can keep the water away, not only from homes but from the city water treatment plant, fire departments and other places essential to maintaining the infrastructure. But for states officials, the problem is being compounded by the fact that they have to lend a hand to another flooded ND city. Minot, 90 miles to our north, is being flooded by a different river, the Souris (or Mouse). About 10,000 people have already been ordered to evacuate. So far, evacuations in Bismarck are voluntary.
For city officials, the new mantra is "20.6 plus 1". The rate of 150,000 cfs translates to a flood stage of 20.6 feet. Planners are adding one foot to their fortifications as a cushion. As for anything beyond that, as you can see by the photo, some people are leaving the rest up to God.
This flood fight is not receiving national news. I think it's a sad thing that they are not covering these mammoth efforts to stave off a might river. However, I can understand, since the flood has not officially arrived yet, and having to cover the flooding along an even ﻿mightier river, the Mississippi, plus all the tornado damage down South. But if you are praying for them, please leave a little room in your prayers for the stalwart people living in or trying to help South Bismarck-Mandan.
﻿ 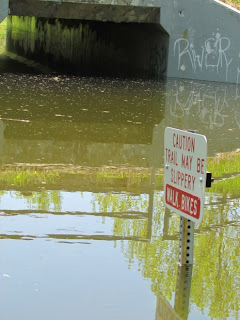 Flooded bike tunnel under Bismarck Expressway.
The now-ironic sign reads "Caution. Trail may be
slippery. Walk Bikes."
Posted by Julie at 8:58 AM

sending prayers, Julie, that EVERYONE stays safe, and the authorities do have the situation under control

The flooding in all parts of the US is just awful, it must be both scary and distressing to be caught up in it. I hope that your townspeople are succesful in their fight to protect all the vital areas.

Ironic that parts of the US are being washed away by floods, when my part (North Texas) has only had 0.88 of an inch of rain this year. So when praying for the flooded, don't forget those who are drying up and blowing away. We would be more than happy to take some of that water off their hands.

I have been wondering about you and the area there. I had heard a little about the flooding.
I am very behind on blogs...and now it is several days since you posted. I hope you are staying dry!
I have family in to Oklahoma panhandle with is in the worst drought ever....if only the rains could go where we need them!!! WHAT A SPRING THIS HAS BEEN!

My Mom used to say "Come hell or high water" when she was serious.
This is serious.
Please keep safe and dry.

Stay safe Dear Friend:)
The USA has had one thing after another for sometime now. So many are left without their homes, some have nothing left of a lifes work. My sister Sharon lives near Joplin, Missouri. Scare me to death until I heard from her. There are places with no water, and dry as a bone, and like your part of the country to much water.
We will not be planting a garden, it is just to wet. And our season is short. I hate turning on the news...you never know what you will get. If it isn't the weather, it's someone showing off their private parts on the web. We are living in some really strange times. Thinking of you, love Mary