THE MOUSE THAT ROARED 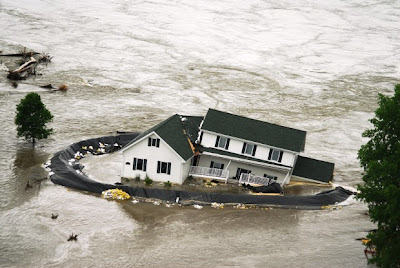 Craig Fugate, Administer of FEMA, the Federal Emergency Management Agency, last week rejected North Dakota's application for assistance to individual homeowners.  In a letter to ND Gov. Jack Dalrymple, Fugate stated that “the damage to the residences from this event was not of such severity and magnitude as to warrant the implementation of Individual Assistance…”
Well, Fugate, tell THAT to the owner of this home in Burleigh County outside of Bismarck. Yesterday afternoon the Hogue Island residence was attacked by the Missouri River - photo above, and then devoured - photo below. (This is the first home in our area claimed by bank erosion.) 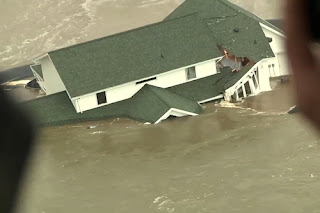 These photos, and also the video footage from a Black Hawk helicopter that happened to be flying overhead, were shocking to all of us here in North Dakota and across the country.
And needless to say, Dalrymple was shocked by FEMA's response. He found it "hard to believe that FEMA does not see the destructive effects of flooding on citizens in North Dakota."  (He is appealing the decision.) The governor was being way more polite than I would have been. I would have prefaced his statement with, "You morons, ....."

Until I saw these pictures, my attention yesterday was turned away from the Missouri River, where the flood fight inside the cities of Bismarck-Mandan is stabilized and the dikes are holding, to Minot, ND, where, unfortunately, the situation is reversed and the news is very, very dire.
This video from last night's NBC Nightly News tells it all:
http://www.hulu.com/watch/251963/nbc-nightly-news-with-brian-williams-thousands-flee-as-river-floods-in-north-dakota 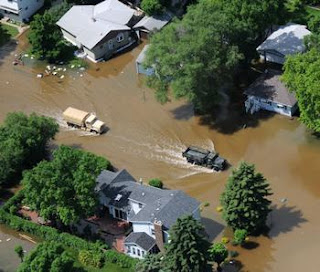 National Guard making sure everyone is
evacuated from their Minot homes
On Tuesday, about 11,000 residents (1/4 of the city's population) were told they had to be out of their homes by 6 p.m. Wednesday. But at 12:57 p.m. yesterday, the river - called the Souris in Canada where it originates, and the Mouse in the US - roared. The roar took the form of eerie sirens wailing across the entire city, as people were told they had to GET OUT NOW. Levees had been breached and water was going over some dikes.

Minot Mayor Curt Zimbelman could not bring himself to admit  that the valiant battle to save the city was lost. However, he did say that "There's nothing more we can do."

The flood is predicted to be worse than the devastating 1969 flood, with the water expected to rise 8 to 9 feet higher than it was back then! 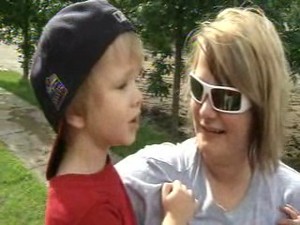 Little boy and his Mom in Minot:
Boy: "Where is the grass?"
Mom: "It's gone."
Boy: "Who took it?"
Mom: "The River took it."
Yes, The River, the Mouse That Roared took it. Minot may not be as big as Tuscaloosa, AL, or Joplin, MO, but this is a major disaster. Yesterday actor Josh Duhamel was urging people to pray for the people of his hometown and to lend assistance through the American Red Cross. Said Duhamel, "My sister’s gonna lose her house… My junior high, my favorite pizza place, the university I went to are all gonna be underwater.”

I echo Duhamel's wishes and prayers for Minot residents (and for the wildlife - see below). 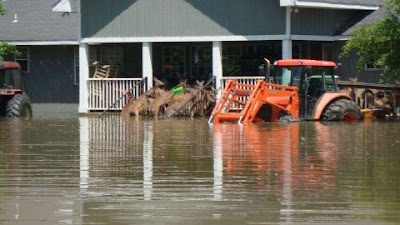 My thoughts and prayers are with you in these dire days. May the Lord lay His hand of protection over each and every one of you.

this is awful Julie, All the poor wildlife as well as human residents. all the loss of homes and habitats. its sobering to realise how mighty the force of nature is. sending prayers too, keep safe.

Horrific! I pray that the desperately need aid will come as soon as possible.

Oh Julie, these photos are heart breaking. I cannot imagine losing my home and everything I own.
The poor animals that werent able to be rescued, its so sad.

Thank you for your post.
We need to know - we need to understand -
A new era - I hope we gain compassion.
love & love,
-g-

Horrible. Just horrible. My heart and prayers go out to those having to cope with such devastation.

This is absolutely appalling - there has been nothing about this on UK news as far as I know and yet it's a devastating situation. I would have thought that this qualified as a disaster area especially as it sounds as though it will get worse. My thoughts are with all those who are experiencing this dreadful flooding.