MOTHER NATURE BITES - AND TAKES A BITE OUT OF FOLKFEST 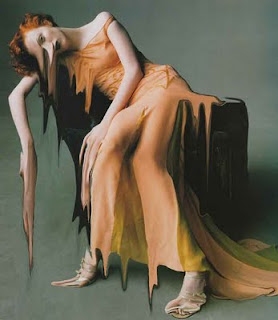 ﻿
Serves you right that you're melting,
Mother Nature, you biatch!
I had planned to end my long blogging drought on September 22 with a nicely-illustrated post about the almost-concurrent autumnal equinox and the September full moon, followed a few days later with a post featuring beautiful images of the Goddess of Autumn with flowing russet hair and bittersweet-hued dresses.
Instead, I feel compelled to write a post about the incredible, almost unimaginable fact that it has been snowing for hours! Yes, snow, on September 17. I cannot argue with meteorological historians - it HAS snowed in North Dakota in September before. However, I have lived in North Dakota all my life and I have never seen snow in July, August OR September (and only once in June). My husband insists that I have - it's a long-standing mini argument of ours - but I know I would have remembered SNOW IN SEPTEMBER!!!
This snowfall has played havoc with Folkfest! Let me explain Folkfest. Bismarck and the surrounding area were settled largely by a sub-group of Germans - those who call themselves Germans From Russia. These were German residents who were enticed by Catherine The Great of Russia to settle in the rich farmlands along the Black Sea in the 1700s. In the late 1800s, they were again enticed - this time by the promise of homestead lands in the Dakotas of the United States.
These German-Russian communities were tightly-knit and determined to maintain their Catholic religion and German language and customs, and they remained purposely isolated even into modern times in North Dakota. A certain area in south central North Dakota has come to be known as Kuchen County, or The German Triangle, with the towns of Strasburg, Linton and Wishek as the three points of the triangle. 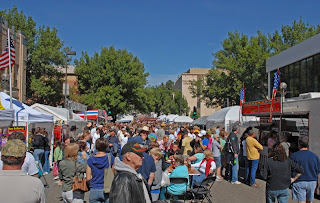 ﻿
The crowded Bismarck Street Fair
on a typical warm, sunny fall day
Kuchen County or The German Triangle is also the home of three points of the triangle of German cuisine: kuchen (KOO-gen, a pastry with custard or fruit fillings); fleischkeichle (flysh-KEE-kluh, a deep-fried meat pie); and knoephle (NIFF-la) soup, a dumpling- or dough-dotted chicken stock-based soup with many variations, including potatoes, cream, and sometimes meat, usually ham.
(And if you ever come to Bismarck/Mandan, the best knoephle soup is at Fried's Family Restaurant in Mandan, which recently, to my and my sister's deep chagrin, is no longer open on weekends - Saturdays usually being the only time we can get together. Fried's knoephle is creamy, not watery, with lovely fluffy dumplings instead of gummy, doughy clumps. Delish!)
Oops, sorry, my taste buds made me digress! Like in many U.S. communities settled by Germans,  it was natural for Bismarck (originally Edwinton but re-named in honor of Count Otto Von himself) to institute an Oktoberfest celebration, a salute to the harvest and heavy on food and beer. I remember my first Oktoberfest in Bismarck in 1981. My husband and I sat huddled at a picnic table in the parking lot of a sports bar (ironically, O-Brien's), the day cloudy, grey, very cool and spitting a bit of rain. Our beer and bratwurts (sans sauerkraut, this combination being another German must-have) were quaffed very quickly before we gave up and left.
Just a few years after we moved here, the good leaders of Bismarck, having  years' of experience with crummy weather in October, decided to move Oktoberfest to the third weekend of September and rename it Folkfest, in honor of not only Germans but the Native Americans, Norwegians, Swedes and Irish folk, to name a few, who helped establish our city. 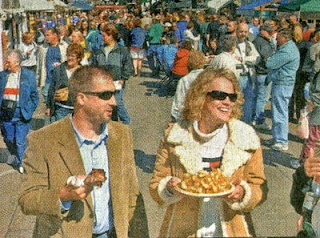 ﻿
Turkey legs and funnel cakes, two staples
of the Bismarck Downtowners' Street Fair
Over the years, Bismarck's Folkfest organizers have dreamed up a great many activities, including a Folkfest Queen Pageant, free brats and kraut lunches, a parade, beer gardens and a homemade-river-raft competition. In fact, when I worked for the Tribune, it was my chore to organize the Trib's Folkfest extra tabloid, which required hours of backbreaking work. (Poor me!)
But the mainstay of Folkfest has always been the Downtowners' Street Fair, where for a Friday and Saturday each fall, several square blocks are cordoned off and dotted with countless food and craft booths. With the transformation from Oktoberfest to Folkfest, we saw many a wondrous addition to the menu, including buffalo burgers, Norwegian lefse, Swedish rice pudding, Indian tacos, fried walleye on a stick and wild rice or Wisconsin cheese soup being the prime contributions from non-German Upper Midwesterners.
But the food offerings didn't stop there. Participants could choose from Asian satay, barbecued giant turkey legs, Chinese chicken wings or fried catfish! When I worked in the Wells Fargo building downtown, I and my co-workers could step right outside three times a day - at coffee breaks and lunch times - and be immediately wrapped up in the street fair experience. We'd return to return to work replete, amid clouds of home-grown raspberries and ice cream, deep-fried cheese curds, pulled pork sandwiches, pizza, kettle corn and soup in a bread bowl. It was an orgy to which we  completely and unashamedly succumbed!
Those who were not turned into rotund roly-polys by all that food could be seen carting homeward the latest in fall crafts - autumn wreaths, Halloween and Thanksgiving ceramics, "The Witch Is In" signs, cozy apple pie potpourris. The days were usually bluebird blue, warm and sometimes even hot (which unfortunately drew pesky yellow-jacket wasps toward the delectable food).
As I watched TV from the security of home at noon today, I saw that the first day of 2010 Folkfest was being made miserable by cold rains, but fair participants were gamely roaming the streets and checking out the booths. By the 5:00 news, we heard that due to the SNOW, vendors were being allowed the heretofore unheard of policy of closing at 6 p.m. rather than 8 if they desired. But still, there were those hardy Nodak pioneers visiting the few booths still open. "What's a little cold rain and snow?", they seemed to be saying.
I'm not going to Folkfest tomorrow. It promises to be a dry but chilly 55 degrees F. I've seen about 25 years of hot and sunny, or at least cloudy and mild, Folkfests, so I can miss a freezing one. But I can be sure that there will be many, many hardy souls out there having the time of their lives and saying, "Flip you Mother Nature, you can't hold me back! I'm the daughter/son of sod-busters and I can take anything you dish out!"
Posted by Julie at 10:13 PM

OMG I can't believe you have snow in September! Welcome back to blog land, I've missed your posts.

I feel your pain, I was supposed to be vending my art and doing a workshop at a festival today, but it's called on account of thunderstorms, not as unexpected as snow in September though!

welcome back Julie! (i)september 22nd would have been a good day to return though- its my birthday!!(/i) :-)

snow? flip!...keep hearing people talk of another bad winter coming, I hope your early snow isnt an indicator of that. Its good to see you back blogging.

Yesterday we had 111 F record setting temps.It'll be HOT again today. Whatever. I too,am inside for most of the day because of weather.
Have missed you. <3

It's so good to hear your "voice" again....Enjoy the snow, those of us here on the East coast are enjoying a super early Fall, which makes one anticipate a long , cold Winter...Oh well, I'm up for whatever the seasons decide to do...I think.

I'm delighted to find your post! I popped by today thinking, "Surely Julie will post re: equinox!"
It is wonderful to read about your abhorant weather. [Sorry!] I have
missed your posts...
I'm reading "The Worst Hard Time" and there are Germans from the Volga region of Russia who were lured to the "Great American Desert" in th ePanhandle of Okalhoma and Texas to start wheat farms. Don't know of any Oktoberfests there....they found that life was a bit hard!