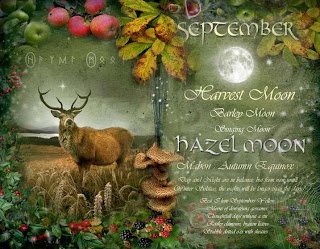 (As best as I can decipher by enlarging the above page from Angela Jayne Barnett's Celtic Luna calendar, the poem says:)


Thanks to Cindi, who helped me decipher the poem and provided me with the two last verses as well as the name of the poem and its author: "Beech Turns Yellow" by Scottish poet Alex Smith.

What a special couple of days we are experiencing! The autumnal equinox for 2010 occurs at 10:09 tonight Central Daylight Time. (The first FULL autumn day is tomorrow, Thursday, Sept. 23.)

The last time the autumn equinox and the September full moon occurred at the same time was in 1991, and it won't happen again for another 19 years - in 2029!

If that wasn't splendid enough, the planet Jupiter is very close to the earth right now. On Monday, it was closer than it will be again until 2022. It is still in our vicinity and will appear as a bright star near the moon tonight and tomorrow. If you're lucky enough to see it under a clear sky, Jupiter should provide a spectacular show.

Although we can't do so every year, this year we can properly call September's full moon The Harvest Moon. (The definition of Harvest Moon is the full moon which is closest to the autumnal equinox, and one year out of every three it falls in October.)

Supposedly, The Harvest Moon is so bright that people could harvest their crops by the light of the moon, as shown in this 1833 painting called "The Harvest Moon" by Samuel Palmer. 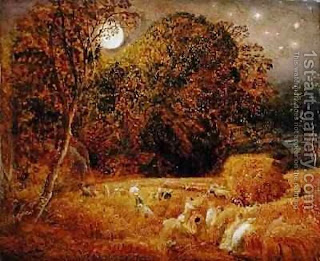 Another name for the September moon is The Full Corn Moon, because corn is supposed to be harvested at this time. Native Americans also called this month's moon The Acorn, Chestnut or Nut Moon, The Yellow Leaf Moon, The Drying Grass Moon or The Rice Moon (named by the Chippewa - or Ojibwe - Indians, who harvested their wild rice during this month). The old English name was The Barley Moon. The Celtic name was The Singing Moon. The Chinese call it The Chrysanthemum Moon.

The autumn equinox was known as Alban Elfed by the ancient Druids. Although it is often called Mabon by modern pagans and shown by that name on the Celtic Wheel of the Year, the Welsh word Mabon was not adopted for this purpose until 1970. 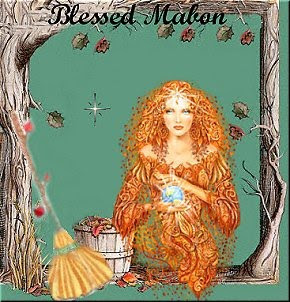 The old festival of Harvest Home or Harvest Homecoming was celebrated at this time. Despite the bad publicity generated by Thomas Tryon's novel, "Harvest Home", which involved human sacrifice, Harvest Home was the pleasantest of holidays. It was a big celebration featuring rituals, games, plays, bonfires, feasting on food and drink and decorating with flowers, leaves, fruits and berries.
Admittedly, Harvest Home does involve the concept of sacrifice, but one that is symbolic only. The sacrifice is that of the spirit of vegetation, or of the barley, in which case it is called John Barleycorn, grown strong over the summer, cut down in his prime, ground up and brewed into beer, where he lives again.

In some regions, a corn dolly was made from the last sheaf of corn (English name for wheat) harvested. The corn dolly often had a place of honor at the banquet table, and was kept until the following spring, when it was plowed back into the ground in hopes that this would bless the new crop.

The following is an old English Harvest Home song: 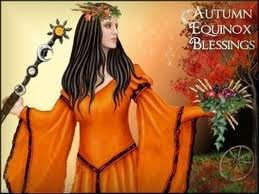 In olden times, prisoners taken in battle would often be released in the autumn to avoid having to feed them in lean winter months. Kit Berry, author of the Stonewylde series of books about a modern pagan community, printed a cool suggestion in her autumn newsletter for a ritual to release all our prisoners.

"Not literal prisoners, but issues and regrets we've held onto for too long and should let go of. Find some autumn leaves, and mark on each one a symbol to represent the prisoner (for example a dollar sign for money issues). Meditate and focus on the prisoner, then burn or bury the leave to symbolize the release of all it represents. Apparently this ritual can be very liberating!"

(For a link to Berry's Stonewylde Autumn Equinox newsletter, go to:  http://www.stonewylde.com/2010autumnequinoxnewsletter.htm
Happy Harvest Home, everyone.
Posted by Julie at 7:05 PM

Great post, with lovely illustrations! I'm out to look up at the full moon and see if I can see Jupiter.
I love the idea of releasing some "prisoners"...and freeing ourselves by doing so!

Lovely post Julie, I like the poem and the calendar picure. Today may be the first official day of autumn but in UK autumn has been with us for at least a couple of weeks, it's very early this year. I shall look for Jupiter and the full moon tonight but I doubt I shall see them because we have cloudy skies and rain forecast.

I love the leaves ritual and plan to try it! Great post on Harvest Home!

Wishing you an abundant harvest dear Julie. Thinking of you.

As always your post is lovely...yep, it's me. I did not die but there were momments when I felt like it might be a good thing.
But this too has pasted and I am trying to get back into life.
It has been and is in the 90's here in my neck of the woods. But cold is on it's way.
I hope you are doing well. Love, Mary

I am not sure what the beautiful September art piece that you posted says, but the September poem (called "Beech turns yellow") quoted reads:
Best I love September’s yellow,
Morns of dew strong gossamer,
Thoughtful days without a stir,
Rooky clamours, brazen leaves,
Stubble dotted o’er with sheaves -
More than Spring’s bright uncontrol
Suit the Autumn of my soul.
Alex Smith

Do you know the tune to the Hookey song? It's very important. Are you in the US or in England? I might be able to find a source for it, in England, so I hope you might be interested. Thanks.
Slag310

No, sorry, I don't know the tune. I found the words to the song on the Internet.