A CORNER OF A FOREIGN FIELD THAT IS FOREVER SCOTLAND 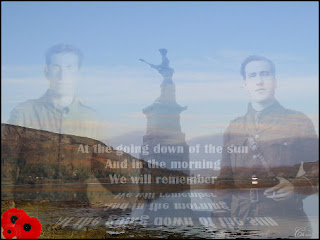 William Munro, left, and Jack Munro, right
THE SOLDIER
"If I should die, think only this of me;
That there's some corner of a foreign field
That is for ever Scotland. There shall be
In that rich earth a richer dust concealed;
A dust whom Scotland bore, shaped, made aware,
Gave, once, her flowers to love, her ways to roam,
A body of Scotland's breathing Scottish air,
Washed by the rivers, blest by suns of home.
And think, this heart, all evil shed away,
A pulse in the eternal mind, no less
Gives somewhere back the thoughts by Scotland given;
Her sights and sounds; dreams happy as her day;
And laughter, learnt of friends; and gentleness,
In hearts at peace, under a Scottish heaven."
(With apologies to English Poet Rupert Brooke for changing the poem a bit.)

Long before I knew the story of my two Scottish great uncles who were killed in France in WWI I wept when I first read these lines: "If I should die, think only this of me; That there's some corner of a foreign field/That is for ever England. There shall be/In that rich earth a richer dust concealed.

For me, there are two corners in foreign fields that will be forever Scotland.

William Munro, a sergeant in the Seaforth Highlanders, died Nov. 13, 1916, at the age of 26. He is buried in the British Cemetery at Mailly Wood, France.

I don't know exactly where John Alexander died, but William died in the hellish battle that became known as Beaumont Hamel. A fellow member of the Fifth Seaforth Highlanders wrote this poem about Beaumont Hamel:

"In the cold of the morning
A grey mist was drawn
Over the waves
That went up in the dawn
Went up like the waves
Of the wild Northern Sea
For the North has arisen
The North has broke free
Ghosts of the heroes
That died in the Wood
Looked on the killing
And saw it was good
Far over the hillsides
They saw in their dream
The kilten men charging
The bayonets gleam."
From the Diary of The Fifth Seaforths by Lt. E. A. Mackintosh 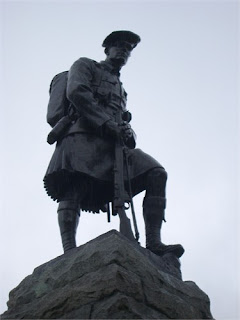 A memorial to the 5th Seaforth Highlanders
at Beaumont Hamel 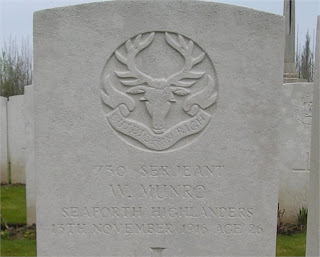 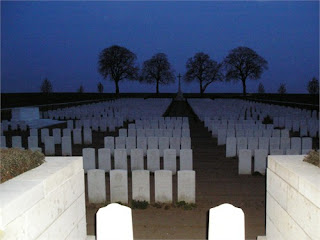 Twilight at Feuchy Chapel, where Jack is buried. 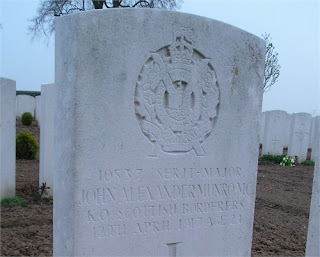 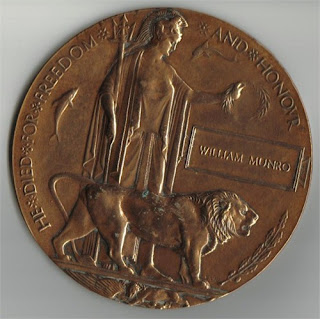 It was decided during World War One that all next of kin of service personnel who lost their lives as a result of the war would be presented with a memorial plaque and commemorative scroll from the King and country. The plaques were cast in bronze and were approximately five inches in diameter. On the plaque itself no rank was recorded as the intention was to show equality in their sacrifice. The troops referred to them as "The Dead Man's Penny".
The stories of William and Jack, and their older brother Archie, who was gassed and taken prisoner at the first battle of Ypres in April 1915, are here: http://celticanamcara.blogspot.com/2009/11/lest-we-forget.html

Photos of the French graves and cemeteries, and the Dead Man's Penny are courtesy of my second cousin, Shirley Sutherland of Golspie Scotland. She also helped design the e-greeting card shown at the top of this post.
I hope someday to be able to follow Shirley's footsteps and visit these cemeteries. Until then, today, Memorial Day, I salute William, Jack and Archie. (Archie - barely - survived the war, was repatriated and returned home. However, he lived only until 1920, his death directly attributable to the grievous damage to his lungs.)

Julie, your love of your ancestral history is so wonderful to hear and to read. Part of me is saddened that all three of these uncles are buried not together and far from home. Then part of me feels your pride for their service and that they are remembered for that in such a heartfelt way in their respective places of burial. I wish I knew half as much of my own family history.

John Alex died during the Battle of Arras which began on 9 April 1917 - The following is a paragraph from the book - A Border Battalion, The 7/8th King's Own Scottish Borderers - "Sergeant-major Munro, after carrying away Private Morrison, who had been wounded, was mortally wounded when returning to Battalion Headquarters with the Signalling Officer, Lieut. Reay".

Your post brought a tear to my eye again!
Shirley

Thank you so much, Shirl, for adding to my knowledge of this gallant man.

"There shall be/In that rich earth a richer dust concealed"....I do like to think the earth is made sweeter
by some of those buried here.
Wonderful post Julie.

I love the poems of Rupert Brooke. I found him through the autobiographies of Vera Brittain, who served as a nurse in France during WWI.

A great deal of who I am comes from Brittain's memoirs: my pacifism, feminism, and commitment to social justice. The generation that survived WWI came away both scarred and ready to change the world away from war. Many years later a psychic told me that in my last life I was a solider who died on the Somme, so perhaps that is why Brittain speaks to me so much.

Your memories of the losses in your own family show how the utter waste of WWI still lingers with us.

Thank you for carrying on the memory of your ancestors.

All wars are horrific but WW1 was definitely one of the worst.

Knowing so much about your family members is awesome Julie - I know you must have worked diligently to dig up so much history.

My trip was unbelievable......the best adventure of my entire life. Already I long to return to Africa for more! I've started posting - hope you can stop by.

Dear Julie, what a sad & moving story, this moved me even more so as. Oh the horrors of war. I have such mixed feelings pride in the men who fought and lost their lives and horror at the sheer waste of it all. This week my youngest and only son just passed his tests to join the british army training college and i am so torn. thinking of you and hoping you are well x

Julie, you have created a beautiful, heart-felt and deeply personal memorial to your lost family members.

Julie, I really enjoy your blog. Hope all is well. I'm missing your wonderful stories.

On our trip to France in April this year we visited the caves underneath Arras where the allied troops gathered before the Battle of Arras - amazingly moving and humbling atmosphere!
Shirley