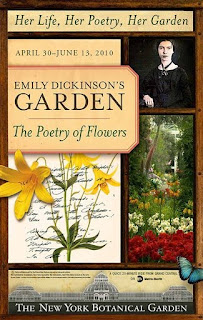 I wonder why the Creator jammed so many gorgeous flowering plants into the month of May.The profusion of blooms is almost overwhelming at this time of year. The double flowering plum next to my bedroom window is an explosion of cotton candy pink. All over town, the crab apple and apple trees are clouds of white, light pink and magenta flowers. The tulips are holding strong, and there are still some daffodils too.
Just yesterday I saw the most striking dark blue hyacinths next to a foundation. The bleeding hearts are so aairy and delicate, and the johnny jump-ups so cheerful. The phlox are sweet mounds of lavender and the chokecherries are heavenly-scented panicles of white. I even saw a clump of purple iris yesterday, and they usually don't bloom until June here. And best of all, the lilacs are set to burst into bloom in just a few days. Oh that I were Emily Dickinson, so I could write memorable poems about them.
Emily (I'll be informal and call her by her first name throughout) wrote a lot of poems featuring flowers, and her letters mentioned many types of flowers as well. Did you know that in her lifetime she was better known for her gardening expertise than her poetry? I didn't. Now, the reverse is true, but the Brooklyn Botanical Garden and the Poetry Society of America are reminding us that her two loves went hand in hand.
As co-presenters, they have put together a display in the Enid A. Haupt Conservatory at the BBG that runs through June 13. Called "Emily Dickinson's Garden - The Poetry of Flowers", the display features such "old-fashioned" flowers and plants as delphiniums, lupines, honeysuckle, roses, lilies, peonies, tulips, lily of the valley, ferns and hydrangeas. The lowly dandelion is present to, taking a place of honor. Of the dandelion, Dickinson wrote that it "Astonishes the grass" and has a "shouting flower." 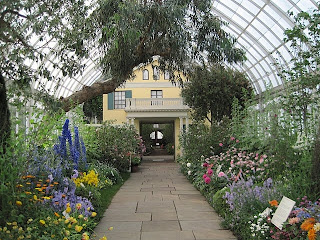 Scattered here and there throughout the Victorian border are poetry stations featuring copies of Emily's poems and audio messages about the works and the flowers that inspired them.

No trace of the original plantings survive at Emily's home in Amherst, MA, so the BBG staff had to research the varieties of plants that would have been popular in a western Massachusetts spring garden more than a century ago, paying particular attention to those Emily mentioned.

The display includes windowed facades meant to look like Dickinson's home and her brother's next door, and there's a facsimile of the poet's bedroom with a window providing a view like the one she had. In this room, she wrote most of her poems and forced bulbs. Emily once called herself a “a Lunatic on Bulbs,” referring to her passion for the daffodils, hyacinths and other spring perennials which she raised indoors in winter. 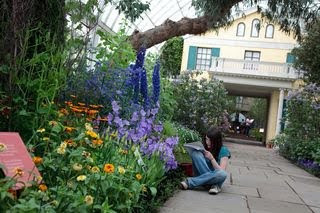 Accompanying the flower display is a gallery exhibition which contains 19th-century botanical books and prints, autographed copies of two of Emily's poems, and a digital edition of the massive herbarium that she assembled in her teens by collecting, pressing and labeling about 400 plant specimens.
There's also a reproduction of a white dress the poet wore. Judith Farr, an adviser to the show and author of "The Gardens of Emily Dickinson," said Dickinson gave up wearing any color but white when she was in her 30s, as she began to withdraw from society. She also took on some other odd behaviors, including gardening at night. Dickinson scholars now suspect that one reason Emily preferred night gardening was because of vision problems: for several years in her early middle age, sunlight stung her eyes.

The exhibit will also feature marathon readings of her poems (she wrote about 1,800!) and lectures by contemporary literary figures who will discuss Emily's significance to American poetry. It is a show that I would love to attend, but I will have to make do with checking out a couple of books that showcase Emily's poems and her garden together. 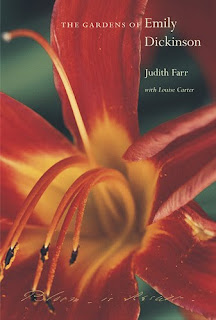 I've already mentioned "The Gardens of Emily Dickinson", shown above. Judith Farr, the author, says Emily used flowers as symbols repeatedly.  To her, as to many Victorian Americans, flowers weren’t just beautifiers; they were moral and personal emblems.

Dickinson, with her auburn hair, identified with the orange tiger lily and sometimes called herself Daisy, for a flower that symbolized innocence. She associated certain richly scented flowers, like roses and jasmine, with men and women to whom she formed emotional attachments. 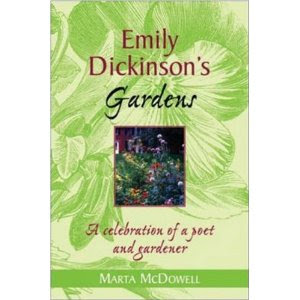 Another book on the poems and flowers of  the beloved "Belle of Amherst" is "Emily Dickinson's Gardens", shown above, by Marta McDowell. McDowell shows us the consummate gardener Emily so passionately was--sending home grown bouquets to friends, studying botany at Amherst Academy and tending her own glassed conservatory off her father's study. 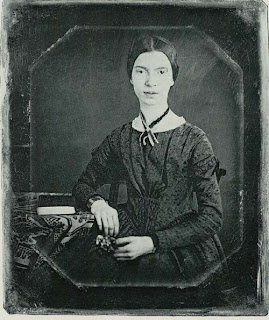 Following are a few of Emily's flower poems:

SHE SLEPT BENEATH A TREE (THE TULIP)

She slept beneath a tree
Remembered but by me.
I touched her Cradle mute
She recognized the foot
Put on her Carmine suit
And see!

The Dandelion's pallid tube
Astonishes the Grass,
And Winter instantly becomes
An infinite Alas --
The tube uplifts a signal Bud
And then a shouting Flower, --
The Proclamation of the Suns
That sepulture is o'er.


UPON A LILAC SEA

SEPAL, petal, and a thorn
Upon a common summer's morn,
A flash of dew, a bee or two,
A breeze
A caper in the trees, --
And I'm a rose!

I HIDE MYSELF WITHIN MY FLOWER

I hide myself within my flower,
That fading from your Vase,
You, unsuspecting, feel for me --
Almost a loneliness.

Perhaps you'd like to buy a flower?
But I could never sell.
If you would like to borrow
Until the daffodil
Unties her yellow bonnet
Beneath the village door,
Until the bees, from clover rows
Their hock and sherry draw,
Why, I will lend until just then,
But not an hour more!

God made a little gentian;
It tried to be a rose
And failed, and all the summer laughed.
But just before the snows
There came a purple creature
That ravished all the hill;
And summer hid her forehead,
And mockery was still.
The frosts were her condition;
The Tyrian would not come
Until the North evoked it.
"Creator! shall I bloom?"


WE SHOULD NOT MIND SO SMALL A FLOWER --

We should not mind so small a flower --
Except it quiet bring
Our little garden that we lost
Back to the Lawn again.
So spicy her Carnations nod --
So drunken, reel her Bees --
So silver steal a hundred flutes
From out a hundred trees --
That whoso sees this little flower
By faith may clear behold
The Bobolinks around the throne
And Dandelions gold.
Posted by Julie at 7:22 AM

Oh this is so lovely, great post. Emily's life is so strange to us in this age and in this country ( The Netherlands ) I read a book about her life last year. Now you have made me curious about her poems and garden...well done.
I go look it up.
Have loeads of pleasure yourself..in the garden
Lieve groeten
Godeliva van Ariadone

What a lovely lovely post - I always learn so much and enjoy everything you write. Thanks.

Swoon. I love Emily Dickinson and to think she is honored in a garden
complete with the poetry of flowers.
I didn't know about any of that. Her poems take my breath away I love them. Thank you so much for this delicious post.
Ahhhh
PS So glad the lilacs are about to bloom for you Anam cara enjoy.

I just recently discovered your blog and am so glad I did. What a sweet post!

I'd love to visit this exhibition! I've come across some of Emily Dickinson's poems but I'd no idea that she was a gardener as well.

What a fabulous post, Julie! I in my supreme ignorance thought Dickinson was from England. Learned something new! I could so relate to the sun bothering her eyes; it also does my own. And of course, I am envying you your lilac season. I bought a new lilac bush this year because I love them so and the one I have from last year is still ridiculously tiny (it hasn't died but it isn't growing or flowering). This one came with blooms but were gone within two weeks. Lilac bushes out here are still wearing blooms, though I suspect their short life is soon over...all except my own. Michael things two days of strong winds stripped them, which may well be true. It is at an awkward gangly stage...

Greetings!
I am sending you the Sunshine Award.
Oooh, you so totally deserve it.
Thanks for your beautiful blog.
Georgy

What a lovely post, and just in the nick of time...it is cold and wet today. Frost on everything this morning and not much better as I write. There is a misty rain falling and I feel like it is February instead of the last days of May. Emily Dickinson saw flowers in everything she did, thank you for reminding me of her beautiful words and love for flowers.
I had to add to the story of Honor O'Flynn that I shared. She was sold on the dock of Baltimore for the price of a hogshead of tobacco for her steerage to America. There were many girls taken from different towns during this time. I do not think it was a choice. She was only 15 when she was taken and 16 when William Logsdon bought her.These were hard times in Ireland, no telling what really happened. The words kidnapped stand out, I hope to find more about Honor very soon. There was a shortage of women in America. I think the people who took her made the money from the men who wanted them. I don't think Tobacco was the only price. But isn't it fun to think about this..I am so loving to find these stories about my family. I have spent so many hours searching and checking, rechecking...it does take alot of my time.
Thank you for coming to my blog, I loved all your comments...you are a sweet friend.
Your, Mary