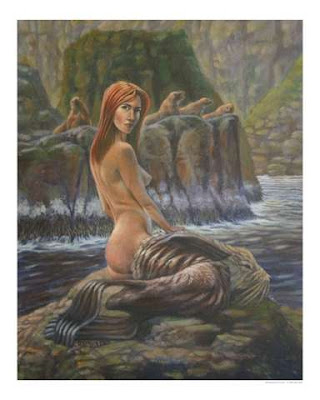 "SELKIE BRIDE" (artist unknown to me)
**********
I first learned about selkies (or silkies) in college when I took a class on English and Scottish Popular Ballads. I have loved them ever since. I think most Americans, if they know about selkies at all, learned about them in the magical film "The Secret of Roan Inish".
Selkies are creatures found in Faroese, Icelandic, Irish and Scottish mythology. They can transform themselves from seals to humans. The legend apparently originated on the Orkney Islands, where selch or selk(ie) is the Scots word for seal.
Selkies are able to change into human form by shedding their seal skins, They often do this to sunbathe upon the rocks. They can revert to seal form by putting their skin back on. But if their skins are lost or stolen, they are trapped on land and are forced obey the one who holds their skin.

(In "The Secret of Roan Inish, a baby is swept out to sea.)

Once their seal-skins were discarded, selkies became extremely attractive to humans and it was not uncommon for relationships to form. In human form, female selkies are depicted as beautiful women with dark hair and eyes and webbing between their fingers and toes.


Male selkies are very handsome in their human form, and have great seduction powers over human women. They typically seek those who are dissatisfied with their romantic life. This includes married women waiting for their fishermen husbands. If a woman wishes to make contact with a selkie male, she has to go to a beach and shed seven tears into the sea. 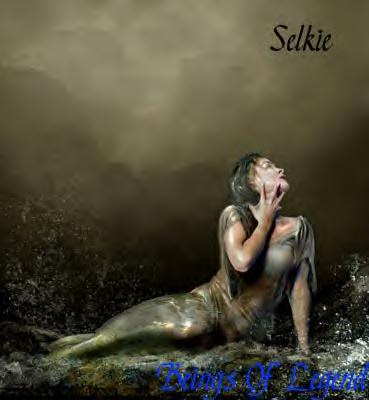 (Artist unknown to me)
Stories concerning selkies are generally romantic tragedies. If a man steals a female selkie's skin, she is in his power, to an extent, and she is forced to become his wife. Female selkies are said to make excellent wives, but because their true home is the sea, they will often be seen gazing longingly at the ocean. If a selkie finds her skin again, she will immediately return to her true home, and sometimes to her selkie husband, in the sea.


In some tales, a selkie maiden has several children by her human husband. In these stories, it is one of her children who discovers her seal skin (often unwitting of its significance). The selkie woman usually avoids seeing her human husband again but is sometimes shown visiting her children and playing with them in the waves.


The husband (or person who took and hid her skin) is said to pine for her and eventually die. 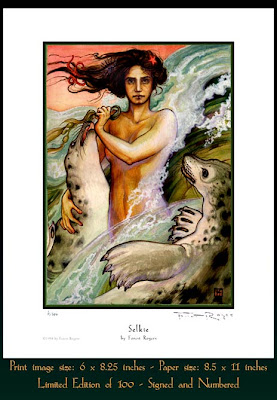 "Selkie" by Forest Rogers
Selkies are not always unhappy on land and choose to live there. One tale tells of a fisherman who married a seal-woman. Against his wife's wishes he set sail dangerously late in the year, and was trapped battling a terrible storm, unable to return home. His wife shifted to her seal form and saved him, even though this meant she could never return to her human body and hence her happy home.


Some stories from Shetland have selkies luring islanders into the sea at midsummer, the lovelorn humans never returning to dry land. 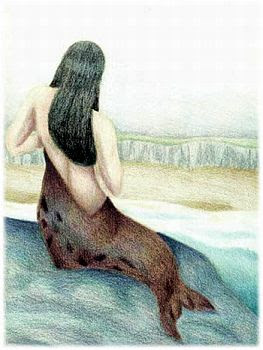 In "The Secret of Roan Inish" which was based on Rosalie K. Fry's book "Secret of the Ron Mor Skerry, a young girl named Fiona learns from her grandparents the tales of the selkies, who have connected with Fiona's family over the ages.


The film also tells the story of Fiona's brother, Jamie, who was swept out to sea in a wooden cradle when they were moving off of Roan Inish. Fiona, though is convinced that her baby brother still lives and, indeed, she later sees Jamie on the island.


One folklorist theory of the origin of the belief in selkies is that shipwrecked Spaniards washed ashore and their jet black hair resembled seals. This was likely the origin of black hair in Celtic nations. 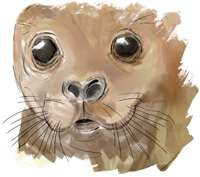 "The Great Selkie o' Suleskerry" (or "Grey Selkie of Suleskerry", as it is also known), is one of the most famous selkie ballads, and one of Orkney's best-known and most haunting.

It recounts the tale of a young Orcadian maiden who falls in love with an elusive selkie-man. She has a child by him but, shortly after, the selkie-man disappears, leaving her alone with her baby son.

Some years later the maiden comes across a grey seal by the shore. She realises the creature before her is none other than her selkie lover, but he once again vanishes beneath the waves, only to return again seven years later. After she gives her son a golden chain, the boy leaves his mother and goes with father to the sea.


The woman marries and some time later, when her husband is out hunting, he shoots two seals - one old and grey, the other younger. Around the neck of the young seal was a gold chain, which the hunter takes home to give his wife.


Upon receiving the gift she realises her son is dead. (The old ballads seldom, if ever, have happy endings.) As with all folk ballads there are various versions. Here's one:

I heard a mother lull her bairn,
and aye she rocked, and aye she sang.
She took so hard upon the verse
that the heart within her body rang.
O, cradle row, and cradle go,
And aye sleep well, my bairn within;
I ken not who thy father is,
nor yet the land that he dwells in."
And up then spake a grey selchie
as aye he woke her from her sleep,
"I'll tell where thy bairn's father is
he's sittin' close by thy bed feet.
"I am a man upon the land;
I am a selchie on the sea,
and when I'm far frae ev'ry strand,
my dwelling is in Sule Skerry.
"And foster well my wee young son,
aye for a twal'month and a day,
and when that twal'month's fairly done,
I'll come and pay the nourice fee."
And when that weary twal'month gaed,
he's come tae pay the nourice fee;
he had ae coffer fu' o' gowd,
and anither fu' o'the white money.
"Upon the skerry is thy son;
upon the skerry lieth he.
Sin thou would see thine ain young son,
now is the time tae speak wi' he."
"But how shall I my young son know
when thou ha' ta'en him far frae me?"
"The one who wears the chain o' gowd,
`mang a' the selchies shall be he.
"And thou will get a hunter good,
and a richt fine hunter I'm sure he'll be;
and the first ae shot that e'er he shoots
will kill baith my young son and me."
Posted by Julie at 3:11 PM

Julie, this series you're doing is just wonderful! I'm learning so much....I had never heard of selkies! I guess I've led a sheltered life!

I love the Great Selkie song. I have it on ea CD And I love to listen to it.

Dear Julie,
What a wonderful site! I must keep coming around, and I'll ask my readers to come explore as well.
I hope you'll visit my site to see SEVEN TEARS INTO THE SEA my selkie book which was (she admits, blushing)nominated for an American Library Association award.
The cottage door is always open at
Seven Tears
Best,
Terri Farley

A wonderful post and, yes, your blog really gathers many interesting readers!!!
The art work is lovely, the beautiful selkies!

this reminds me of the story in Women who run with the wolves.. 'Seal skin, soul skin'

have loved reading about Selkies xo

Dear Julie--a visit to your blog has lifted the winter blahs for me. Thanks. . .and I hope you are feeling more and more 'spring-like.' We have the same cold as you with more blowing snow.
I think of you often and wish you better & best days.
xoxo
Noni

I had NEVER heard of Selkie's until I read a book years ago called "The Nature of Water and Air" by Regina McBride.

It freaked me out. HA!

It was sort of depressing even...especially in the end but there was a reason for it.
But I sure learned what a "Selkie" was.
The along came the "Roan Inish" movie and that further explained some things.
Cute movie actually......

This story was so interesting. I have never heard that before. I know the Irish always surround themselves with such wonderful stories and lore. Much of it is very sad but so interesting to hear about. I hope you have a wonderful day.

Fabulous post Julie - The Secret of Roan Inish was great - I recently watched it with my granddaughter Jasmin.

Hope you are well dear - I've been so busy and am tardy with comments - just not enough hours in my days!

Hope Spring is on its way to you!

I love your site. My nickname is Sylkie so I've been reading about selkies for many years now. The stories are very interesting...I hope to go to the Orkney islands someday. Thank you for posting! :)

When I was a young girl living in Newfoundland, I heard a story /song on the radio about one of the stories in this blog... I am not sure if I am correct but I think the woman's name was Kayleigh in the story. It was an absolutely beautiful story and left me with such a feeling.

It was similar to your story ...."Selkies are not always unhappy on land and choose to live there. One tale tells of a fisherman who married a seal-woman. Against his wife's wishes he set sail dangerously late in the year, and was trapped battling a terrible storm, unable to return home. His wife shifted to her seal form and saved him, even though this meant she could never return to her human body and hence her happy home."

I have been looking for this story/ song for many years. If you have any ideas or insight of this recording, I would appreciate it. Kelly

Peter Kagen and the Wind by Gordon Bok is the name of the song.