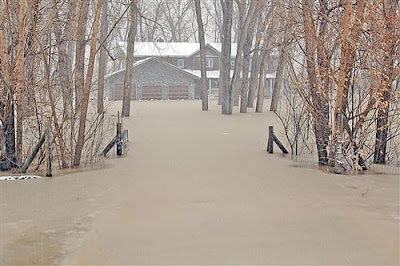 FOX ISLAND, BISMARCK
I want to thank everyone for their comments and e-mails of concern regarding the flooding in Bismarck. Dan and I and Gracie are fine.


I had promised an updated post last night and I'm sorry I didn't get to it. I watched the 5 p.m. news, the 6 p.m. news and the 10 p.m. news but felt too exhausted by then to write a post.
But I have good news. The flood threat here in Bismarck has lessened, for several reasons:


2. The dynamiting of the south ice jam has been successful. They set off one round at 4:30 p.m. yesterday and one late last night. They will set off a third and final round this morning. It has gotten the water moving. Also, helicopters are dumping massive amounts of salt on the ice to dissolve it. (The ice chunks are 3 feet thick and each is about the size of a small car.)


3. The report that the north ice jam at the Double Ditch Historic Site and Recreation Area had broken yesterday morning proved to be erroneous. The news media later reported that water was running over and around the jam, but that it was holding firm for the time being. However, the updated report was too late to prevent a mini panic in Bismarck, with people rushing home to protect the property.


4. The Tuesday blizzard has left very cold air in its wake, which is a good thing! It has helped with the runoff problem. Oh, didn't I tell you that we had a blizzard? We got 8 inches of heavy wet snow with wind gusting up to 45 miles per hour.


I couldn't make it up the hill from work on Tuesday. I ended up sliding off the road and getting stuck. I was going to write a post about my awful day, but decided that a great many people around here were having way worse problems than I was. 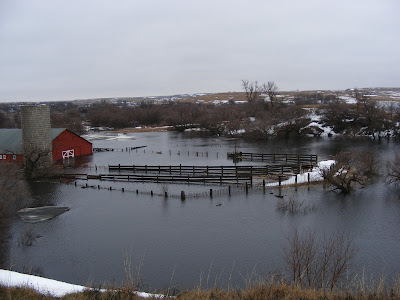 I have been focusing on the flooding in Bismarck because I live here, but I have to tell you that a number of smaller towns in North Dakota have been deeply affected by flooding. Among the hardest hit are Hazen, Beulah, Linton, Carson and Mott. Also, farmers are suffering. A number of families had to be airlifted from their water-surrounded farms by the National Guard in Black Hawk helicopters.


Farmsteads have been turned into islands and cattle have been left stranded. It is calving season and it couldn't have happened at a worse time. One area farmer lost 50 cows and calves.


The national NBC News last night focused on Fargo, rightly so. The Red River of the North is predicted to crest in Fargo tomorrow at its highest level ever, at 41 feet. This beats the 1997 crest of 39.51 feet and the all-time record crest of 40.1 feet in 1897.

It was 1997 when the Raging Red devastated my beloved former hometown of Grand Forks, when it experienced the Flood of the Millennium. The flood changed the face of Grand Forks forever. Since then the city of Grand Forks has spent a half billion dollars to build an elaborate, state-of-the art dike system. Fargo did not. Now they are going to have their Flood of the Millennium. Thousands of volunteers are racing against time to fill sandbags and the city is scurrying to raise the dikes to 43 feet.
UPDATED AT 6:00 PM THURSDAY: THE FLOOD CREST AT FARGO HAS BEEN UPGRADE TO 43 FEET. THIS IS DISASTROUS NEWS.

Please pray for the residents of Fargo and all North Dakotans. Almost every inch of the state is under a flood warning.

I had plans to show a bunch of KFYR-TV flood photos but the site is getting so many hits it is taking forever to download the photos. Instead, I will give you links to a slide show and a couple of videos.

This slideshow is from the Bismarck Tribune: http://bismarcktribune.com/shared-content/story_tools/slideshow/?type=slideshow&id=89 . It includes a great shot of a guy rescuing his two dogs from the flood. I hope you have the patience to watch the slideshow all the way to the end so you can see what an ugly, nasty thing an ice jam is.

Here is a link to a video of some people near Fargo trying to save their home. (You will recognize it from the still photo I showed yesterday of the dog surveying her flooded farmestead.) Notice how much the water has risen since the photo was taken:

My prayers will continue - my heart breaks to see the red barn in so much water. Now, I'll go back and watch the videos - hold tight and pray!

Oh my goodness, Julie! So glad that you are all okay but this is really awful for everyone. My prayers are with all of you.
xo,
Lynda

I just saw this on the news Julie and I immediately thought of you and had to come see if you were ok xo
stay safe xo - I will keep you all in my prayers and thoughts.

How awful! Every year it seems that there are floods and disasters somewhere...your area has had more than it's share. So glad you are safe. I send my prayers to all of those who are suffering through this.
xx

My heart goes out to those in ND…
I just cannot imagine anything worst then a flood and a blizzard at the same time.
Either one is a task to be reckon with but both...


Glad to hear that your family is OK…

I have meant to write you the past couple of days to see what was going on.....but am glad to see that so far so good for you all.
I hate when these things happen in the Springtime.....I'm sure it's not over yet either.
Hang in there you all!
Joyce

I'm so sad for everyone affected by this flooding, and I will be praying for them. I am glad to know that you and your family are not affected directly.