A WEEK IN THE LIFE - NORTH DAKOTA STYLE 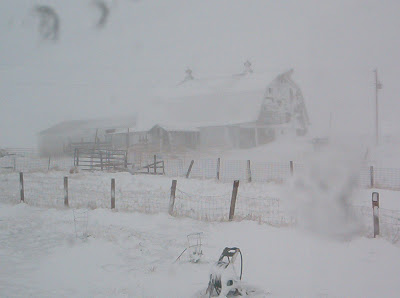 Monday: Lovely day, temp in the 60s. There's talk of a big storm coming in from the west.

Tuesday: Election day and another lovely day in the 60s. They're predicting a nasty snowstorm later on this week.

Wednesday: The SW portion of the state is getting snow but then again they always get the nasty weather. They've already had snow this fall. But in Bismarck, it was 50 degrees when I went to work this morning! There was a bit of light rain but nothing major. However, blizzard warnings are posted!

Thursday morning: Oh my god, what a night we had last night. I woke to sleet/ice hitting the north-facing windows about 3:00 a.m. and then came the lightning and thunder. Followed immediately by scared dogs tearing into our bedroom and refusing to leave. After a major tussle we finally get them out.

The radio reports that the blizzard is on its way and is playing havoc in other towns, with some having a foot of snow already. They're also saying that our streets are slippery due to all that sleet/ice last night. However, as I drive to work the streets are just wet, and there's a bit of snow at the edges of the streets and on the lawns. But, it is really cold and the wind is howling like a banshee.

Driving by the municipal golf course, I see two medium size dogs, one brown and one white, trotting happily in tandem down the sidewalk, a popular path for joggers, walkers and dog walkers. There were no owners in sight. I had to chuckle at the dogs' merry aspects (We're free! We're free!) and wondered at what great adventure they thought they were embarking upon. (I also hope they were re-captured and brought home before the storm.)

Noon: No action yet, but I'm glad I brought my lunch anyway. Brrr.

2:00 p.m. Yish, we can't see beyond the parking lot. The snow is blowing sideways.

3:00 p.m. One of my co-workers couldn't make it up the hill on the street that runs in front of our building. People are getting antsy and nervous.

4:00 p.m. The P.A. system announces that Bismarck State College is closing. Fortunately, they've just sanded the many hills that make up the BSC campus so all the stuck people are able to get moving again. I creep home, making it back in 30 minutes as opposed to the usual 7 minute drive.

10:00 p.m. No travel is advised in the western 2/3 of the state and roads in the SW are closed. The local news is all agog that a national weather channel has sent a representative out here for the first big blizzard of the winter of 2008-2009.

Friday, 6:45 a.m. The radio announces a bunch of school closings, including BSC. But wait, they're saying BSC classes. What about the offices? Shall I get up or not? I'll snuggle down and wait a few minutes more. Oh, here's an amendment - BSC classes are canceled and its offices are closed. I have an unexpected day off.

8:00 a.m. I'm at loose ends. I guess I'll start by writing a post. Penny is enjoying this weather. Instead of being the big red dog, today she is the big white dog. She could lie down in a snow drift and not mind it a bit. Gracie...not so much. The neighbor kids are already outside playing in the snow. The neighbor is blowing out all our driveways and sidewalks. I'm going to have a cup of hot chocolate and chill out (I mean, snuggle up.) 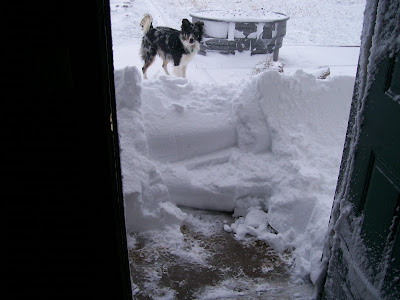 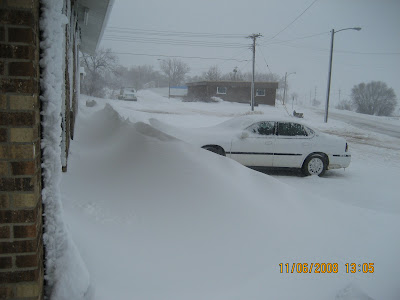 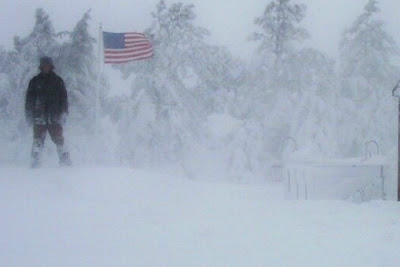 P.S. Is it just me, or do you see those two ghostly snow people dancing at the right side of the photo at the very top of this post?
Posted by Julie at 7:40 AM

And YES, I do see the couple dancing! That's kinda spooky....but also fun.

Did your husband get home okay?
I get caught up in what you write.
And smile looking out at my sunny California back yard all green and lush with foliage. Fall leaves still on the trees. Winter no where in sight yet...
Enjoy your indoor joys today and stay warm.

I don't think I could handle all the snow. I've only been in it for a few days at the most. We're having winds today but it's still in the eighties. We never really have winter in So. CA. It's more like Spring, Summer (which lasts for about 5 months) and then Fall for maybe Nov. and Dec. Spring starts for me in January. As soon as Christmas is over I'm ready for Spring!

You've had a week of extremes Julie, I envy you looking out onto a white carpet *!*

The snow people are definitely there!!!

I am glad you have a day off close to the weekend.
Stay warm!

It is sunny and windy here...I will make some tea and think of you!

I saw the people dancing and wondered if you were doing a self portrait. Oh the snow is so amazing - and I'm so glad I'm here in the Pacific Northwest with our buckets of rain falling on us. Last night we thought about building an ark - and today it hasn't let up much.

The Punkin headed girl and I were worried about you yesterday when we saw all the forecasts about the blizzards. Keep warm and enjoy the day off.

All I can say Julie is that I am glad its you and not me. We just have rain today. I am not ready for snow.

Hi Julie,
Hope you are all snuggled up with a good book! Sending you love and warmth from Az.
xx

Oh my goodness girl..I can't believe how much snow you have. The leaves are just beginning to turn here. We are barely wearing a sweater...brrrrr
I hope you stay nice and warm..take care

Ydes, i see something, cant make it out clearly though

Good Lord I couldn't take it....especially since you have a LOT more to come. Ugh.

It's 71, clear and BEAUTIFUL here in Baton Rouge. No humidity.....my favorite time of year! HA!

Ummm.....glad you celebrated your sister's birthday before the snow fest. HA!

I saw this on the news and just KNEW you all were "getting it."
Crazy.
I don't mind snow.....but for like one day. Christmas. HA!
Stay warm my friend....I'm off to work today. Blah! No snow days here that is forsure.
See ya!
Joyce

I feel cold just reading about it..
What a week!

Hope your hubby made it home ok..
I really am not looking forward to winter this year..
The older I get the harder it gets..

That is a lot of snow Julie, but of course, you know that. It must have been one heck of a storm.
I did see the snow people dancing...I thought it could be Indians (the people) making the snow God's spill out the snow. Kind a like a salt shaker. Okay, so I am a little nuts.
It is rainy here and cold, but not to cold yet.
If you get a moment, go to my blog. On the left side bar you will see that I have a new blog with the begaining of my Altered book. I thought you might like to give it a peek.
Big Hugs, Mary

I can see your snow people too. I think the first snow of winter is always exciting and exhilarating - by January I expect the novelty has worn off a bit :) I haven't seen snow like that in the UK since the early 1970s. We have a series on TV at the moment called Stephen Fry in America where he drives round the US and visits every state - Bismark was one of the places he stopped in.