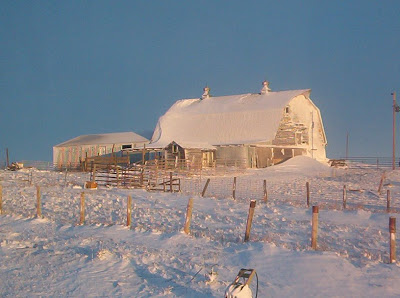 The storm is over, the sun is out, and look, the dancing snow couple is gone (see photo, previous post).
The same lady who took a photo of her farm yard the other day during the blizzard has posted a new photo (to KFYR TV Sky Spy pictures). And as you can see, there is nothing there where the snow people were. I think they have gone away until another blizzard comes. And I think blizzards make them delirious with joy.
Seeing the snow people reminded me of the wonderful video I got for Kristen when she was little, Raymond Briggs' "The Snowman." If you've never seen it, you should rent it or buy it (it's on DVD now!) It is fantastic. It has no dialogue whatsoever, but features incredibly beautiful music. It's the story of a snowman who comes alive, and then magically flies the little English boy who created him to a merry, musical gathering of snow men and women. I've always thought of it as a Christmas video, but I think from now on it will be my blizzard video.
For those of you who expressed concern about my husband being stuck on Thursday night, don't worry, he was given a push right away. Almost everyone is a Good Samaritan in North Dakota, and you can always count on them in a storm. In fact, there are teenage boys with their four-wheel drives who think it's fun to go out in a blizzard to help people with a push or shoveling out. There are folks who fire up their snowmobiles to deliver medicine and get people to the hospital. The people who were stranded at the Bismarck Greyhound bus depot on Thursday (some had NEVER seen snow before) were given food and beds by the Red Cross. That's one reason why Dan and I continue to live in North Dakota, even during a nasty winter.
I haven't been outdoors since late Thursday afternoon and I am starting to get cabin fever, trapped here alone with the dogs. My sis and decided not to go to lunch today. She lives in a small town five miles outside of Bismarck, and the roads out in the country are still bad. I am at loose ends. I did start a good book last night - "Sepulchre" by Kate Mosse. It drew me in right away, as I thought it would because I loved her previous book, "Labyrinth."
But today, I didn't feel like reading. Instead, I once again tried to post a Rich Text post to my blog and once again, I failed. There are several things about Blogger that really bug me, including having a very limited choice of fonts, not being able to wrap text around a photo, and not being able to control spacing between paragraphs.
For about the third time in a week, I composed a post with wrap-around text, a nice font that looks like handwriting, bullets, framed pictures, a banner and more. All for naught.
Tell me, people who use Blogger, how do you do counteract this? I specifically downloaded a free trial of Microsoft Word 2007 because when I took the class I found out that you can supposedly write a Rich Text post and send it right to your blog with format intact. I wrote a post and found that I could indeed send it - but all the lovely images and formatting had disappeared.
Then, I wrote to Blogger Help and was advised to use Microsoft Windows Live Writer instead. I found myself to be frustrated there as well. (Let it be known right now, that I am an older person who merged onto the information highway via a tricycle.)
So now, I'm asking all you Bloggers with a capital "B" for help (in non-techy language, please!)
Posted by Julie at 3:21 PM

Snow is so beautiful....as long as I'm looking at it from afar! Your description of how people all join in to help reminded me of visits to my grandparents ranch in Kansas when I was a kid. Everyone did the same kind of things when there was a storm. Neighbors helping neighbors.

As for your problem with blogger/word....I'm absolutely no help at all but I'll be checking back to see if you get any good advice!

Can't help you there, I'm not very techincal.

The dancing couple is amazing!

Blogger frustrates me too!
Typepad might be better.
I love the beautiful snow and the snowmand video you mentioned too!

I am one of the developers of Windows Live Writer. What kind of problems did you have using it?

Feel free to email me at bturner@microsoft.com

That picture is gorgeous!!! Wow!!!
It's a miracle that I have a blog.
I know so little. I don't even know how to eMail those who left a comment...finally learned how to put links in (before I used to type out the whole address)sad really. But you know what I like about us???? We may be on trikes but we try!!!
xx

Well, first of all Julie, your sketchbook story is coming along beautifully. You have captured a time and place so well. I've enjoyed reading Bess Stanhope's story very much.

Second....oh my! That snow is really something! I'm glad that you are all doing ok. We only rarely receive snow, and snow like that is almost unheard of where I live. Just a few inches brings our city to a complete standstill. We are snow whimps compared to people in your part of the world.

I have to admit that I know nothing about Blogger. When I was choosing a place to host my blog, Blogger was giving people fits, so I went with Typepad. I've been very happy with them. Good luck Julie!

I have resorted to making pdf files and then selecting and snapping a picture of the part I want, paste it into something like powerpoint, save it out as a jpeg and posting the stuff as a jpeg.

I am glad to hear I am not the only one with such formatting problems, I have frustrations with mine all the time. I wonder about wordpress. I started a blog there, but haven't done anything with it.

oh my goodness! that much snow already?? I love the snow people in the previous photo ... I spotted them immediately!

Sorry I can't help you with the blogger problem ... every site seems to have its limitations. Good luck with finding something that works!

Have you been able to get outdoors yet? The snow looks wonderful from here and I quite like the idea of being cooped in just so long as I had books and food and a log fire*!*