BESS PONDERS, "WHAT SHALL I BE?" 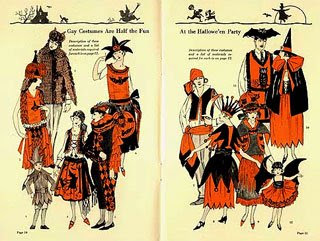 It's time to start thinking about putting together a Halloween costume. When I was back home in St. Paul, I would have started planning for my costume a lot earlier, because they were so much more elaborate. This year I have had fun just looking through some books featuring lavish Halloween costumes. The gypsy costume from Dennison's Bogie Book (above) is intriguing. 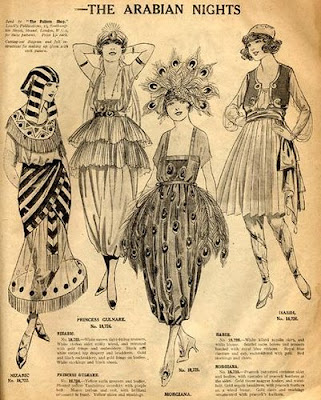 Had I still been living in the cities, I might have chosen to have the Cleopatra costume made for me, but instead of having that net hoop, I would have extended the striped skirt. 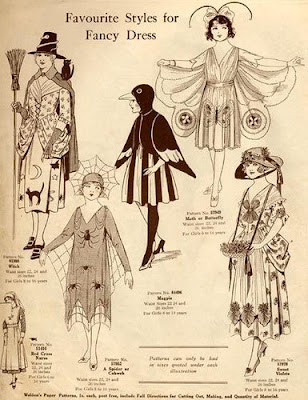 I really fancy this spider web costume too. Wouldn't my dressmaker have had fun with that one? 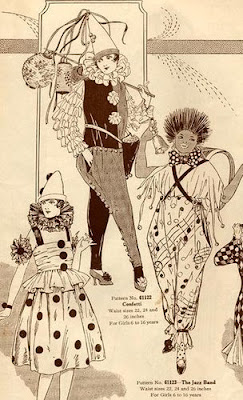 These are just plain odd. I wouldn't be caught dead leaving the house in one of these. The black face is particularly dreadful. 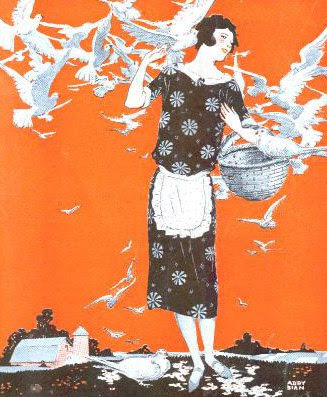 This isn't a Halloween costume, of course, but I had to laugh out loud when I ran across this illustration. What self-respecting North Dakota farm wife would put on a fancy dress and heels to go out in the barnyard, let alone let herself be surrounded by a bunch of pecking birds? 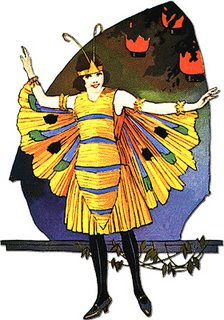 In the end, though, I think I would have chosen this butterfly fantasy. It's made entirely of crepe paper! 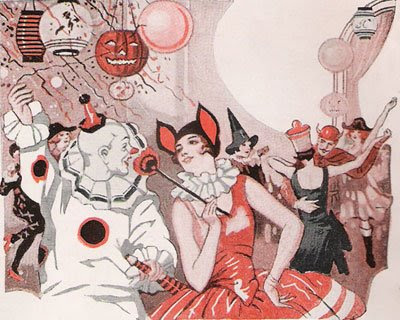 In St. Paul, many of the owners of the stately homes on Summit Avenue would host Halloween open houses. People would move from house to house, savoring hors d'oeuvres and cocktails at each (I loved the Brandy Alexanders and Pink Squirrels). At one party I attended, they actually had a bathtub full of gin!


At about 9:00 p.m. the young adults would depart Summit Hill for the Halloween dance at the country club. 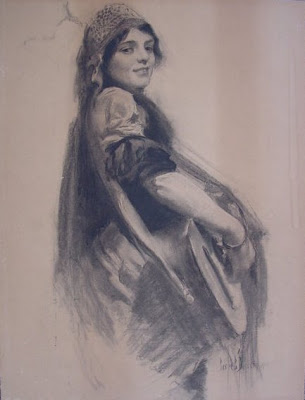 Hmmm, my mind keeps being drawn to a gypsy costume...


Of course, out here, the Halloween costumes are much simpler. Mine would have to be a lot sturdier and warmer than that crepe paper dress creation, and I don't have much money. But if I were a gypsy, I wouldn't have to sew a costume. I could round up a white peasant blouse with a sleeveless lace-up vest, a shawl, a long skirt and high boots. That way I could put long stockings on under the skirt and I could be toasty warm when I take the children trick or treating in case the weather is cold. 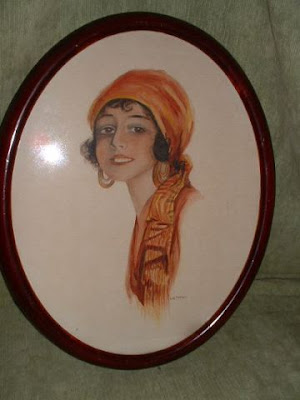 I could tie a red scarf over my hair and wear big hoop earrings and tons of bangles and beads. I could use the same costume when I go to Irene Bitz' Halloween party, where I will be playing a fortune teller. Yes, that cinches it. I WILL be a gypsy for Halloween this year!

NOTE: Please check out Lena (Mrs. Staggs') post for Wednesday, Oct. 29 (A Happy Miscellany): http://ahappymiscellany.typepad.com/a_happy_miscellany/2008/10/sketchbook-wednesday-9.html?cid=136856545#comments. It's an Autumn Sketch Book page featuring a hayride. I never even thought of a hayride for Bess and her friends, but it is perfect for an autumn sketchbook.

Lena's book is the inspiration for my book. Wednesday's post is her ninth one giving us tips on how to make an autumn sketch book. Though usually I just use general ideas from Lena's book, I will be copying this page almost exactly. Thanks Lena, I am enjoying this so much and will hate to see it end!
Posted by Julie at 7:06 PM

love all these old pictures.

Wow look how things have changed.
I love all the sketches.
And of course I love Halloween. I have to work this year, but I do plan on dressing up, would you believe I already have my costume sittng in a basket in the closet..Guess what I am going as...
A gypsy!

Wonderful post - I look forward to these so much.

I love all these pictures!! They make me want to draw something! Being a gypsy was always my first choice for Halloween because I could usually find everything I needed in my own closet! When I was little my mom made all my costumes from crepe paper. I wish I still had them.

Oh you know how I love this concept! And the images you've shared are wonderful! Keep it going, OK?
Colleen

And carrying on, with your theme...

Please come over and see my costume!!! For PEA'S Halloween Party on Friday. Are you going?!?

I am soooo cute, and perky, and pretty!!!!!! Stop laughing! This is the Net, ya'know! And a Party is in Virtual Reality, ya' know! Where anything is possible!!!! -giggles-

I'm finally catching up with your last few posts...I need more hours in the day to visit everyone! lol I've so enjoyed these Bess Stanhope entries that you've created, reading them, I'd swear they truly were written by someone in the 1920's!! I wish I had even half your talent at writing!! I remember dressing up as a gypsy a couple of times when I use to go out trick or treating:-) xoxo

What a wonderful job you have done of bring the old illustrations together with a delightful story!
I like some of those old costumes...but think I'll pass on the raven or crow, I like them but don't want to be one!

Bess, You are absolutely right...a gypsy is the perfect costume for you. Lucky you have so much to choose from. This Halloween I'll be enjoying a bonfire made from scrub oak twigs. I'll be wrapped in a traditional Yaqui blanket, so in a sense I'll be in costume.
Maryfrank October 1925

i like the idea of the red scarf in her hair and bangles and hoops, very chic and gypsy ;-)
muau to you dear!
p.s. been very busy lately, i own you an email ;-)