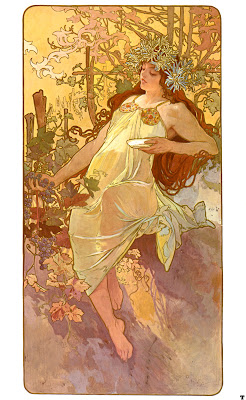 You'll have to forgive my dreadful puns in this post. I am combining an appreciation of the Art Nouveau paintings of Alphonse Mucha and my mucha appreciation for everyone who entered the "Fire Fancies" Art Challenge and those who voted. Ewww . . . that was bad, wasn't it?

Moving right along, Mary and I announce the contest winners as follows: First Place, Carmen of "Writing From Life"; Second Place, Lena (or Mrs. Staggs) of "A Happy Miscellany"; and Third Place to Kim of "Midwest Musings". Take a bow, ladies, you all deserve your prizes.

And the winner of the drawing from among the voters is JoAnne from "Pieceful Afternoon." Congratulations! 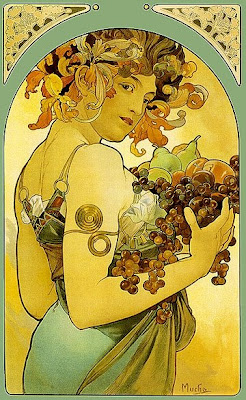 I do appreciate Mucha very much. I chose these particular paintings because it seems that Mucha loved autumn as well as I do. The painting at the top of this post is among his most famous. It is a panel from one of his several series of Four Seasons paintings. The overall colors, the wreath of mums and the fall leaves all combine to tell us just which panel this is.

This painting of a lady with the "foofy" hair is also an autumn panel, from another of Mucha's Four Seasons series. 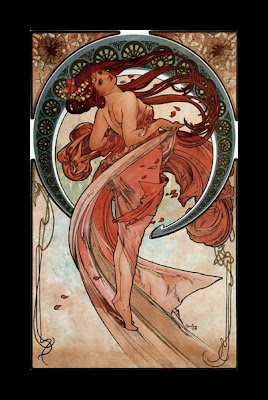 The painting of the lady in the green dress and the painting directly above aren't part of a series, I think, but are individual paintings. However, they still carry autumn themes. The lady in the green gown holds the bounties of the harvest, and in the painting above the lady's diaphanous dress and veil are being swirled by a wind full of tumbling leaves. And what autumn color synonym would you use for the delicious and almost indescribable color of her dress?

And finally, yet another autumn (or "Automne") panel from a Four Seasons series. This is my very favorite.
Mucha was born in the Czech Republic in 1860 but moved to Paris at the age of 27. He was known for his paintings of beautiful young women in neoclassical clothing styles. He soared to instant fame when he designed a poster of popular stage actress Sarah Bernhardt dressed for her role in the play "Gismonda".
While some call his work a prime example of Art Nouveau style, Mucha actually invented it. What was first called Mucha Style later became known as Art Nouveau style.
Mucha later returned to Prague, but it proved to be his undoing.
Although I knew a bit about Mucha, I didn't know this:
"The rise of fascism in the late 1930s led to Mucha's works, as well as his Slavic nationalism, being denounced in the press as 'reactionary'. When German troops marched into Czechoslovakia in the spring of 1939, Mucha was among the first people to be arrested by the Gestapo. During the course of the interrogation the aging artist fell ill with pneumonia. Though eventually released, he never recovered from the strain of this event, or seeing his home invaded and overcome. He died in Prague on July 14, 1939 of a lung infection." (Wikipedia).
~~~~~~~~~~~~~~~~~~~~~~~~~~~~~~~~~~~~~~~~~~~~~~~~~~
I have to stop now. I am crying too much.
Posted by Julie at 5:50 PM

Beautiful artwork a sad story but one I know too well because my family was taken as prisoners .. my mother the only survivor and now a prisoner of Dimentia.

Everyone's art was amazing! I think a kudos goes to all who entered and to the ladies who hosted the fun!

Hi Julie,
I just gave my daughter a set of coasters with Alphonse Mucha artwork. I have always admired his work. At the time I couldn't recall his name, so imagine my suprise when I read your post!

the very first image means a world to me, in the image, she is pregnant, there is another one of her where she is walking and oh my it is to take you to another world, her pregnant belly looks divine. i really love his work.
Yay for Carmen, and Lena, and Kim, yay yay yay!!!
Thank you for this very fun challenge, thank you very much! I am ready for another one ;-)

Congratulations to all three winners.

I still say that Kim's {"Midwest Musings"} was the prettiest and she should have won. And I just told her so, too.

Just popped in to say hello, and i got lost in your wonderful blog. I love your post, beautiful. Mucha's work & art nouveau has always been amongst some of my favourite things. as are all things faerie & magical. i hope to be back very soon * ruthie*

Well hello from Ireland !!! what beautiful pictures, I too am Irish with a scottish flavor, look forward to visiting your blog again, best wishes ,Angie .

Those paintings are so pretty, and you've taught me much that I didn't know about them, and the artist, Judy. Thank you.

Thank you also to you, Mary and to all the participants in the challenge, both artists, and voters, for making it such a nice experience. I enjoyed it very much.

I too appreciate Mucha Mucha much!
When I was a teenager I had Mucha posters all over my room. Those images are embedded into my memories.Fantastic!
Congrats to all of the winners!!!
xx

Lovely images and nice pun Julie ;)
Congrats to the winners and hosts*!*

Dear Julie, first a big thank you for the ecard. xx
I'm sorry I have not been around much lately, there are a few things going on here that demand my time. I have stopped in now and then, and loved your story, you are a wonderful writer. I used to have several copies of Mucha's prints and love them. I didn't know his history, how awfully sad.

these are wonderful, Mom (Margaret's Ramblings) adore the period, so soft and feminine (hopes I spelt that write).