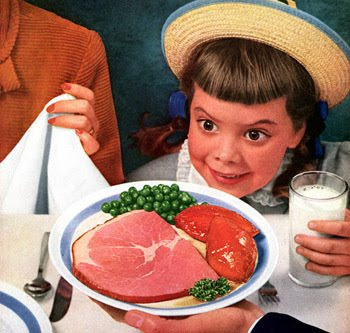 Gemma of "Wild Woman in a Desert Garden" has tagged me to list six quirky things about myself. I've done this before and can't think of six more. I guess I'm a pretty tame lady. I tend to hide my quirkiness under a bushel. basket. Like Luke Wilson tells Sarah Jessica Parker in "The Family Stone": "You have a freak flag - you just don't fly it very often."
But I was a quirky kid, so I'll list six quirky things about me back then:
1. When I ate, I had to eat one food entirely before starting another. For example, I would have to eat my all peas first, then my potatoes, then my meat. My stepfather didn't like this. He would always say, "They're going to get mixed up in your stomach anyway." Oh, pretty picture, dad. (At least I didn't care if my foods touched each other.)
He was also the guy who made me sit for hours to finish some kind of food I didn't like. Once it was a slice of tomato, once it was a fried egg. I don't remember if I ever gave up and ate them, but I do remember him telling me how his mother would take her child's uneaten food, put it in the cupboard and then bring it out for the next meal until it was gone. And this was in the days before refrigeration! I never met her but I certainly hated the lady.
By the way, I like sliced tomatoes now, but I have not eaten and will never eat a fried egg. So there!
2. Before I went to sleep, I would stick my finger into a corner of my blanket, and then I would stick my finger in my ear.
3. I liked to read lying on the floor with my feet up on the easy chair. Or sprawled sideways across the chair.
4. I assigned male or female properties to colors, and to silverware. (Maybe everyone does this?) Forks and spoons are female, knives are male. The female colors are pink, orange, red, yellow, and white. The male colors are blue, green, black, gray, brown, purple.
5. One day I was late for school and heard the bell ringing when I was only half way there. I stopped slogging through the snow and knocked at the Early house (everyone knew everyone else in my village). They invited me in, gave me hot cocoa, took off my boots and propped my wet feet on the warm oven door.
6. When I was in fifth grade, we had a Valentine's party at my one-room schoolhouse. We were allowed to invite our siblings who weren't in school. My little sis came in a pretty pink dress, with a pair of pants underneath for the trip. (This was often done in North Dakota, because it gets freakin' cold here in the winter.)
At the school, my sister wouldn't take her pants off. The teacher said, "Oh that's alright, let her be." I replied, "No, she's my sister and she'll do what I tell her!" Then I stormed off and hid behind the freestanding stove and cried for the rest of the party. I didn't speak to the teacher unless spoken to for the next year and a half, until I went to school in town.
Posted by Julie at 3:02 PM

Yay! I got here when the moon was 100% FULL! Gee you aren't quirky LOL! Glad you flew your freak flag for this one.
love ya
xx

My son eats that way... One food item at a time…

I always wonder if he will eat like this all of his life.
It does not bother me; he has very healthy eating habits.

I didn't like my food to touch when I was a kid! Oh, well, I guess we all need to have some quirks or life would be very dull. I enjoyed that you gave us quirks about yourself as a child.

You just gave me a flash back of a cooked meal put in front of me, the same one I'd refused to eat the day before ... I think it had been reheated under the grill, I didn't eat it but learnt a lesson *!*

where on earth did you get the picture of that scary little girl? Yikes!! =:o

Julie, you were one interesting gal even in the bygone days! I could feel some of your emotion toward step daddy...

I ate almost everything as a kid and I was very random in the way I ate. No rules. I probably could have used a few more rules.

Growing up in suburbia, my only contact with one room schoolhouses was through historic sites in old towns or Knott's Berry Farm. I romanticized it a bit, but then I didn't have to walk through snow to get there or get the pot belly stove going.

I love your stories, Julie! Keep on telling them!

Oh, I related more to the women in Mama Mia than I was prepared for...