I have been blessed and fortunate to be on the receiving end, lately, of a number of blogging awards. Moncha Eilis of "Dreaming of Avalon" has awarded me the Arte y Pico award, above, which is given to bloggers based on their creativity, design, interesting material, and contribution to the blogging community, no matter what language.

Here's what Moncha has to say: "Julie shares lovely stories about Celtic culture and her own life, together with beautiful pictures. I love the Celtic look her blog has and as I am very interested in Celtic culture, I can learn a lot by reading the stories."

The Arte y Pico award originated in a blog of the same name, by a creative lady named Eseya in Uruguay. I can guess what arte means in Spanish. Any one know what pico means?

Karen (KJ) at "eye-dyllic" and Carol of "Charli and Me" both gave me the "E" award for excellence in blogging. Carol chose my art blog, "Julie Julie" for this award, which is very flattering, to say the least. 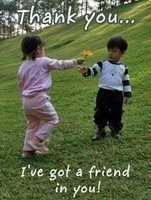 And last but by no means least, Louise at "At the Pink Gate" has awarded me the "I've got a friend in you" award.
Now comes the part I dread - sharing this award with others. Not that I dread sharing. I dread singling out just a few blogs from among the 50 on my sidebar. I believe this causes hurt feelings among those who are "left out". Having been left out of things plenty of times in my childhood - and adult life, come to think of it - I choose not to perpetuate those feelings.
I have actually thought about not accepting awards at all. But that wouldn't be fair to the bloggers who were gracious enough to choose me. And even though I am almost through reading Eckhart Tolle's "A New World", and know that the ego needs to be suppressed, I still have a big enough ego to be thrilled to be singled out.
I've thought of not passing along the awards I receive. One of the awards came with a stipulation that to even accept it, I had to obligate myself to name at least a dozen other recipients for the award, so perhaps I should not even include it in this post. The trouble is, I am a bit of a rebel. As Craig Ferguson says, "I just can't live by your rules, man!"
Fortunately, some choices have already been made for me. My friends Robyn at "Tales of Inglewood" and Annie at "Bimbimbie" have already been awarded the Arte y Pico award. Hear, hear, I second that! Janet at "The Lavender Loft" has already been given the "Friend" award, and I couldn't have named a better blogging friend than Janet. And my friend Joyce at "The Secret Gardener" has already won the "Excellence" award, and you couldn't find a more deserving person.
So that leaves me only 46 names to choose from. I could say, "I award all three awards to all of you." But that would be a cop out.
Or, I could choose some people - maybe 2, maybe 5, maybe 10, who knows or needs to know how many - and let the recipients know privately. Which I will be doing.
And thank you, thank you to those who gave me these awards. "Due to circumstances beyond my control" I haven't been much of a blogging friend lately. Therefore I will try harder to deserve the "Friends" award. For the same reason, I haven't been very inspired lately, so I will try to be a more "Excellent" blogger. And I haven't posted as much about the Celts as I had planned to when I started blogging, so I will try harder to live up to the expectations of the "Arte y Pico" award.
Posted by Julie at 8:09 AM

Congratulations on receiving all those lovely awards...you truly are deserving of them:-) I know what you mean about not liking it when you have to pick only a few friends to pass them on to...doing in private is the best idea I've heard yet! lol I never thought of doing that but I think I will from now on. Lately I wasn't passing on the awards to anyone because I was too worried about hurting feelings. Hope all is well my friend and that you're enjoying Spring! xox

It's such a pity that receiving these awards gives you such a dilemma! I'm sure those who made them didn't intend to give you a headache! You deserve each one of them. Your blog is a delight, and we all know that life goes on between posts. Congratulations!

And now, as the word verification tells me, I'll "gobunt"!

Congratulations on all your much deserved awards!
I rented a BBC series from our library on the Celts....and learned a lot! For instance that western France is still Celtic---Bretonne(Brittanny),u I think.

Part of Spain was/(is?) Celtic as well - Galicia! I must try to find that BBC series.

Congratulations on the awards Julie ~ no one could be more deserving.
I hope everything is ok...
Sending hugs))

YOU are blessed!
Great awards indeed.
No pressure though. HA!
Really, we just do what we can do and that's that.

You do have probably the BEST "artwork" I've seen on a blog site though. The colors just are wonderful, I don't know how you do it. I try and it still never comes out this nice.

Well the Celts...what an amazing lot. Yes..you are RIGHT...upper France and Spain are considered "Celtic" regions which I thought was amazing when I learned that but if you just listen to their "folk music" from those areas you will hear how similar it is to the "Irish Celtic" music.
Interesting all of it.
I LOVE cultures.....

Try to find that BBC production and I will as well at my library which carries TONS of BBC things. I'll let you know if and when I find it.

Well done on the awards Julie, I'm with you on the passing them on front, Im always flattered to be nominated but rarely pass them on these days. Hope you keep your resolution to write more about the Celts, it's such an interesting subject. I'm a bad blogger right now too, but hoping to return to the fray proper;ly in a weeke or two.

Julie--I can't think of anyone whose blog deserves to be highlighted more than yours. You are a friend, indeed, and I send warm congratulations and hugs to you today!

You deserve every award you get! And oh my gosh that screech owl picture is divine! Love it! xoxoxo

Arte and pico sounds super!
They are Spanish words not so sure why the pico but it must just a kind of metaphor and fun
You are a great friend so you deserve the friend award and all of them!
Congratulations!

well done on the awards Julie! I sympathise wiith your feelings, i received the Arte Y Pico award 3 times recently from 3 separate bloggers,but I havent passed it on either.

congratulations on the awards. I agree, you have a great blog.

Thanks for the message you left on mine. I was sort of wondering if maybe I hadn't even made a comment.

Congrats! I feel the same way about awards you have to pass on. I think it reminds me of not inviting someone to my birthday party or something. You just don't want hurt feelings. I probably should add a disclaimer similar to your's about how I love everyone's blogs but just singled out a few that I thought fit the description of the award the best. :) Love your blog too by the way. I found it recently.

Julie you are most deserving of these awards..Congratulations..hugs aNNa

WOO WOO, LADY! It's wonderful to see that so many people are noticing your creative spirit! I really feel one of your standout qualities is your writing!

I, too, have been in a quandary as to the handling of blog awards. I had just written some of my feelings on a popular blog that opened up this topic for discussion. Within 2 days I received my first award!

One of the things I wrote was:

"I celebrate when my blog friends receive awards, recognition, and gifts! I am genuinely happy that they’re happy; grateful that others notice how fabulous they are. Yet, many of these awards are so profuse on websites that they lose their significance. I guess it would be like handing out Academy Awards every day of the year!"

Julie, like you, I began to evaluate my approach to such awards. I basically came to the same conclusion you did. I decided to be a gracious receiver and an enthusiastic giver.

I think the challenges arise when blog groupings become cliques and take on sorority-like mannerisms—something I'm not much interested in. My guess is that you aren't a fan of this either.

Congratulations to you dear Julie! And thanks so much for your wonderful comments on my blog and the sweet things you said about me on Joyce's blog!