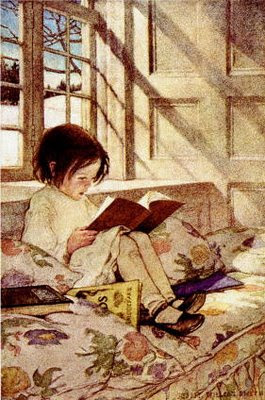 "BOOKS IN WINTER"
By Jessie Willcox Smith
**********
When I started my blog last January I promised myself I would list all the books I read over the year. I was faithful to my list for the first nine months, but neglected to post the books for the last three months. So here they are, plus the books I read in January.

“The Girls Who Went Away”, by Ann Fessler. This book deserves a post of its own, and I will write it soon.

“Promise Me”, by Harlan Coben. Our October book club book, it's a mystery/thriller, but not a very good one.

“The Wicker Man”, by Robin Hardy and Anthony Shaffer. I thought I was going to read a book about people on a remote Scottish Island still practicing the ancient ways. Instead, I got a book about human sacrifice and so-called “pagan” sexual practices.

“Into the Wild”, by Jon Krakauer. Years ago I had read Krakauer’s magazine article about Chris McCandless, the young man who went into the wild in Alaska and died there. I was happy to read that Krakauer cleared up some mistruths and misconceptions that were in the article.

“The Huntress,” by Susan Carroll. This is the fourth book in a series I’ve been reading about the Ariane, Gabrielle and Mirabelle, the Sisters of Faire Isle of France. Are they witches or healers? I highly recommend this series that starts with “The Dark Queen.”

“Clapton: The Biography”, by Eric Clapton. Like many others, I have always considered Eric Clapton a guitar god, but he is no god in real life. I found him to be extremely unlikable as he tells the unvarnished truth of his life. Apparently he’s now a happily married, faithful man, and I am happy he is one famous person who survived his demons.

“A Short History of Tractors in Ukrainian”, by Marina Lewycka. Don’t let the odd title fool you. Our November book club book is the hilarious story of an elderly Ukrainian immigrant in England who marries a hotsy-totsy, gold-digging young Ukrainian woman so she can get her English citizenship. (He’s an expert on tractors – hence the title.)

“The Almost Moon”, by Alice Seebold. This is about a woman who murders her mother. Horrific? Well, after you read about Mom, you might not feel so horrified. Not as good as Seebold’s “The Lovely Bones.”

“The Weight of Water”, by Anita Shreve. I wanted to read this book because it deals, in part, with the famous 19th century axe murders of two women on the Isle of Shoals, New Hampshire. Unfortunately, the book stays mainly in the (boring) present.)

“The Longest Night of the Year”, Dean Koontz. This is a pretty good book for Koontz, especially if you love Golden Retrievers like I, Koontz and his characters do.

“The Boy Who Loved Anne Frank: A Novel”, Ellen Feldman. This is a fictional tale about Peter van Daan, the boy who lived in the annexe with Anne, and how he might have fared if he survived the concentration camp and became a U.S. citizen.

“The Lady in the Palazzo: At Home in Umbria,” Marlena de Blasi. I think de Blasi’s series of books on Italy (this is her third, not counting her cookbooks) also deserves a post of its own.

I am disgusted with how few books I read last year, and I know that blogging was part of the problem. I am going to try to read more and blog less in 2008.
Posted by Julie at 5:55 PM

Julie quite a good list of books here! Coincidently I watched the movie
the wicker man" last night on the movie channel and was totally surprised at the ending!! Dean Koonz I was an avid reader of his books at one time..in fact I have one sitting on my nightstand...You would be disappointed in knowing I have read few books this past year just can't seem to focus..I keep reading the same page over and over then put the book down! Perhaps when I'm in Az I can relax and focus!
I did answer your Q. in my latest blog.
hugs NG xo

Winter just seems to be the perfect time to curl up with a good book especially if you also have a nice fire and a cup of tea or hot chocolate!

Julie - I was interested in your review of Anita Shreve's 'The Weight of Water' - am I to understand you found the entire story boring? I loved her first books but then found they started to deteriorate - and I was bored!

Hope you are doing OK dear - sorry I've been lax commenting but you know how my hands have become paintbrushes of late!!!

Thinking of you and sending a hug.

I'm not reading as much these day either. I used to go through one or two a week, now it's more like one every two weeks if I am lucky. I have finished Daughters of Fire, and will get it off to you this week.
xx

You don't need my advice, so I won't word it, that way. Hmmmm, so how to say my view?

Well, just say... my view is... and that doesn't mean that it has to be anyone else's view!

I have been very naughty too :-(

plus this blog is for your daughter, so it does have a purpose.

Goodness Julie, that's almost a library you have listed - I love books but I find reading relaxes me too well and I always nod off. I usually have three or four books on the go at once BUT they will take me months to dip in and out of. I try to put an hour a day in and then a few pages when I go to bed. I love old bookstores and can't resist going in for a browse and coming out with one or two "must haves" *!*

A book list ~ that sounds like a great idea. I love to read, but I have a feeling 2008 is going to be a lean year for bookreading since I'll be in school full-time. I'm going to try, though.

Julie, dropping by to let you know that I've awarded you a You Make My Day award. Because you do.

Always looking for book reviews and just happen to have one on my blog today.

I love all the deBalsi books including the cookbooks. Agree that Weight of Water was pretty dull and I'm going to check my online library for "A Short History..." now.

Thanks for the reviews.

well, from the books you listed, i've read two on your list:

promise me by harlan coben. i agree, not one of his best; and,

but i'm currently reading "eat, pray, love" by elizabeth gilbert (which happens to connect with me on so many different levels);

thoreau's "walden pond" which i reread many times and LIVES on my bedside table as i never get enough;

started reading "why the caged bird sings," by maya angelou and so far it is simply captivating. worth a read;

finished reading franz kafka's "metamorphosis and other short stories." okay, i'll give the man a star for being highly creative but it was painful and stressful to read...his stories are just a little too sick for my taste. i try to read at least one literary book a year, and i can say with all honesty, he's not one of my favorites. plus, i truly hate roaches.

thanks for the reminder of “Clapton: The Biography”. I've been wanting to read this. I'm going to post it to my Good Reads shelf so I don't forget.

I'm quite in awe of the number of books you've read! I know that I read blogs more than books now ... something that I too want to change in 2008! ~ Lynda xo

I used to read books in a few hours
or 1/2 a day...Now it takes me days and weeks. I think I am savoring them more this way...but I'm not putting a dent in my reading list. Hope you get to read more in 2008....but continue to blog. Your blog is one I love to read....blogs feed me as much as books these days.Where else can I find favorite stories, art, poetry
and meet like minded soul sisters?

i am awarding you with the Make My Day blogger award, you can find it on my blog.