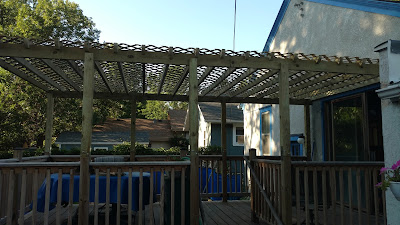 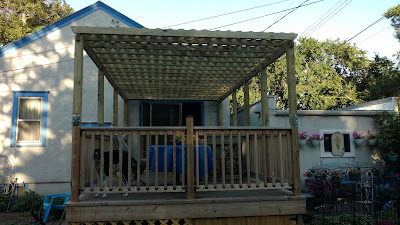 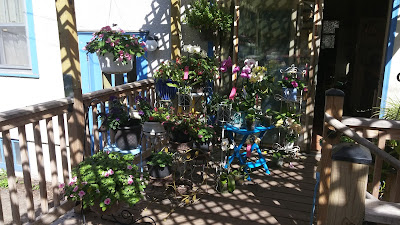 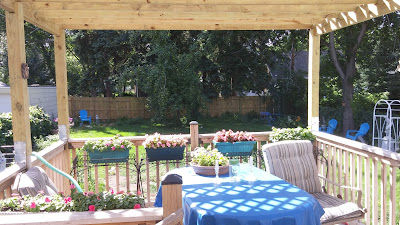 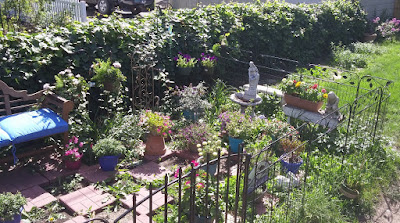 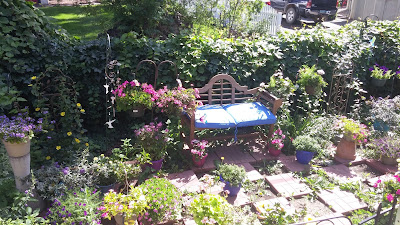 This is another view of the courtyard garden, and unfortunately of my neighbor's driveway. However, when I am down in the courtyard , I have perfect privacy due to the grapevine. I also have privacy on the other side of the yard, from my neighbor's ivy. Both are excellent for hiding chain link fences. However, you will note that I said I have privacy. Holly can still see through the chain links, and barks excessively at the neighbors, and especially rabbits, cats, and children, whom she appears to have never seen before.
So that problem still needs to be resolved. And my hugest disappointment to date is the 2014 re-seeding of the back yard. It cost a lot, and did not take. Last year, it was half grass covered with plaintain weeds and half bare dirt. This year it is an explosion of weeds of all sorts and great height. I have had two helpers hack away at the weeds over the summer, and recently had a go at them myself. I am half wishing for fall so that the weeds will die!
It is clear that next year's project is seeding the lawn again - but making it smaller, by carving out more perennial beds to replace a lot of the grass. Ah, there will be a lot of dreaming over the long, cold winter.﻿
﻿
Posted by Julie at 9:24 PM