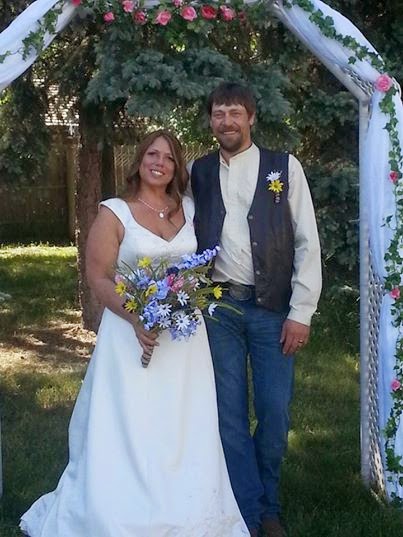 Sheree and Kevin Wagner
It was a beautiful Midsummer Day here in Bismarck, capped off by a lovely evening wedding at The Post pioneer village south of Mandan. My best co-worker buddy and her long-time boyfriend were together nine years and engaged since Thanksgiving 2012. Not wanting to get married in a year with "13" in it, she chose June of 2014.
Believe me, she had planned this wedding thoroughly. There wasn't one detail she could have possibly missed. But there's always one thing you can't count on with North Dakota weddings like hers and mine - the weather. My own wedding day 40 years ago this month dawned windy, cloudy and cool, but cleared up and warmed up by 5:00 p.m.
It's days like these that make me glad that I live in North Dakota. The first feelings came to me as I crossed the Missouri from Bismarck to Mandan. Many boats were on the river, their occupants enjoying a fine evening on the water after a hot day. It made me wish I was on one of the speeding motorboats with spray in my face, or just tooling along on a pontoon, but no, I was on my way to a wedding.
Having driven mere blocks south of the Stage Stop Saloon corner in Mandan, then past the hill where I used to live, I was out in the countryside in mere minutes. The crops are all coming along nicely row up on row in the fields along the highway. Even virgin prairie was lush and green due to the recent rains, and the sweet clover was in bloom. There is nothing better than the scent of sweet clover wafting along the air on a summer's eve. The meadowlarks and bobolinks were singing their hearts out, and the wild roses were in bloom.
Behind the wedding arbor, the lowering sun sent shafts of light through a band of evergreens. A light breeze was just enough to waft any insects away. The bride, her maid of honor and her bridesmaids, which included her 12-year old daughter and 16-year-old stepdaughter, were all beautiful and perfectly simple with their wildflower bouquets. All the groomsmen, including Kevin's 19-year old son, were the picture of casual in their blue jeans, leather vests, and ivory western shirts.
We retired indoors for the reception, but another co-worker and I, the only other person I knew besides the bride and groom, left quite soon after the luncheon and toasts. I wanted to be outdoors again. I knew that most of the group would retire outside to the grounds again, and there was to be a bonfire and much partying into the night, but I don't drink and drive, so I headed home again in the still bright evening.
When I got to back to Bismarck I made a mad decision and stopped to buy a 4-pack of Seagram's Escapes Strawberry Daiquiris. I took my drink and sat outside on the deck. It was as peaceful in my backyard as it had been out on the prairie, but with different birdsong. Even though I was very tired, I was determined to stay out until it got dark. Since the sun set last night at 9:41 p.m., it was after 10:00 when I went in. I'd had a whopping two bottles of the flavored malt beverage. I poured myself into bed, thinking that was party enough for this gal on Midsummer's Day.
Posted by Julie at 10:33 AM

It all sounds just lovely. Bright blessings to the newly married couple and of course to you and your family Julie x

how lovely to be married on the Summer solstice. many blessings to them. I also sat in my garden while the sun set Julie :-)

What a lovely day - I'm glad you enjoyed it. We went to the beach and found a secluded spot - had a picnic and stayed there until after sunset.

I make it a point never to drink and drive, and never to drink unless I'm within crawling distance of my bed. That said, I have a six-pack of Dos Equis (beer) in my fridge, and only a month ago, I quit taking a medication that should not be mixed with alcohol, so I can now safely indulge if I so desire.

I could not refrain from commenting. Exceptionally well written!