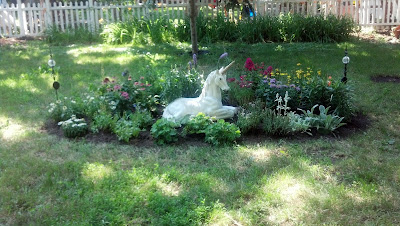 I haven't posted since July and thought it was about time I brought you up to date.

On Friday I found out that I can finally have my hernia surgery. I was supposed to have it on May 17, but in pre-op lab tests that morning they found out that my blood platelet count was very low and canceled my surgery because I would have bled to death during the operation (platelets help with the clotting of blood.)

It has been an interesting summer as they tried to find out what was the matter with me. While I was still at the hospital, they ran some tests which revealed that I had very, very low levels of Vitamin B-12, which can affect platelet production. I began having Vitamin-B injections - daily at first, and then weekly. After a month, my doctor, who is an oncologist/hematologist, said that my Vitamin B-12 count was normal but my platelet count wasn't, so that was not the cause.

To see if my bone marrow was failing to produce platelets, I had a bone marrow biopsy, which can be very painful, but lucky me, I felt no pain from it. It took forever to get the results, but finally I found out that my bone marrow is producing tons of nice, normal, healthy platelets. This showed that I did not have cancer - no leukemia or lymphoma - which was a great relief. (I got my bill on Saturday for the biopsy - $8,000, of which insurance paid $5,000.)

My doctor by then was pretty sure I had ITP, idiopathic (old term)/immuno (new term)  thrombocytopenic purpura, and that my spleen was eating up my platelets. I had an ultrasound to see if my spleen was enlarged. (It isn't.)

I also had an infusion of IVIG, immunogammaglobulin. Friday, after a four-week wait, I found out this was very successful, and my platelet count went back up to normal. (My doctor says this proves I have ITP.) Therefore, I can schedule my surgery. Five to seven days before the operation, I will have another infusion to make sure my platelet count is plentiful.

Having a hernia all summer meant that I could not bend over without nausea or pain, much less plant and weed. Fortunately, I had a lot of helpers. My first helper helped me create my Unicorn Garden, pictured above. He contributed the labor; I did the design and bought the plants. 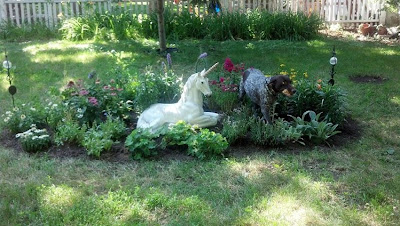 My niece, Kelsey, had to take three pictures before she could get a dog-free photo! Yes, that's Gracie in the garden, holding a rawhide treat in her mouth. She probably thought the Unicorn Garden would bee a great place to hide the treat, because the unicorn would certainly protect it from thieves! (The unicorn comes from Design Toscano.)

Unfortunately I had to fire my first helper, because I believe he cheated me out of hours, so I turned to Kelsey and her boyfriend, Marcus. Between them and the guy who mows my lawn, they did just a tremendous amount of work. They hauled stuff to the dump, weeded and weeded, put up lattice panels, planted, spread grass seed on the bare spots, moved a ton of pavers, cut down grapevines which threatened to take over the yard and pruned the hedge. Kudos also to my co-worker and her fiance who put together two garden benches and an arbor.

The Unicorn Garden was the first phase of my garden design to be completed. The front yard is also basically complete. I have added dragonfly garden decorations such as flags and wind chimes, and installed a sign stating that my home is named Dragonfly House. Unlike in England, American people don't name their homes, but I wanted to name mine. It may seem  pretentious but I thought, I am an Old Lady now, I can wear purple and do as I please! And I am pleased to give my house a name!

I thought of many fanciful names, including La Maison des Roses, which would certainly fit my front yard, but decided on Dragonfly House because once a year, gorgeous giant blue dragonflies hold a convention here, perching on the front walls of my gray house. Plus, dragonflies are a symbol of great luck

Partially done areas in my backyard are my Celtic Lady's Garden, named for my blog and containing Celtic symbols such as dragons, elves and a Celtic maiden statue; my Fairy Garden which is planted with daylilies and holds many fairy statutes; and my Moonlit Meadow Garden with a moongazy rabbit, fox and barn owl statues and a Forest Lady. This is temporary planted with daylilies but will hopefully be seeded with a lot of meadow flowers next spring.

I also have a "wall" of Green Men and Women plaques, and plan to install a miniature fairy garden by the larger Fairy Garden.

The end of the growing season is approaching swiftly here in North Dakota, but I will keep you posted with photos as things progress next year, and will also keep you up to date on my surgery.
Posted by Julie at 7:57 PM

Dear Julie you have been through the mill this Summer - so sorry! Hopefully you will soon be able to have the surgery, get back to normal, and be pain free. Glad you were able to get good helpers for the new garden project - it's very lovely. Mine is somewhat overgrown after this wet Summer and now heat and humidity which makes it uncomfortable to be working outside.

Lovely to have you back - I think of you often and hope you are managing in this new phase of your life dear. Be strong and know you are in my prayers.

lovely to see a post here julie! what a summer you have had. all those tests, all those bills too, eek! But wonderful that you now know the problem, and can move on to the surgery that will really help you. Its lovely that you could immerse yourself in garden planning, such a good way to take your mind off the health problems, and something postive to focus on. please take more garden photos when you can. i will email in the bext few days, rather than write an essay here!

blessings to you, leanne x

Julie, so good to hear from you, back blogging again. I'm so glad you are on the mend after this worrying time.
Your garden looks beautiful.

Oh my dear - it is so good to hear that they have at least figured out the problem with the blood - always good to know what it is NOT.

Your garden is lovely - and how wonderful that you finally had good helpers. I love the unicorn -just give Gracie one of those pointy birthday hats and she can be a unicorn too.

So glad to see that you finally have a reasonable diagnosis and can have your surgery. The garden is just lovely. What great plans you have for it!

I am so glad you finally got a diagnosis that appears to be manageable! I will be keeping you in my thoughts and sending bunches of healing light as you progress to your surgery and recovery.

Where are you Julie?

I just happened to stumbled upon your blog via Google while on a search for a image. Of course, I had to stay for a while and have read your story.

I am very sorry for your loss. What a difficult time for you and your daughter. I understand what you were going through, as I went through this with my father.

Hope the you have had your surgery and are healthy. I noticed you haven't posted...so I hope the news is good. Take care of yourself and hope to see you back posting on your blog.