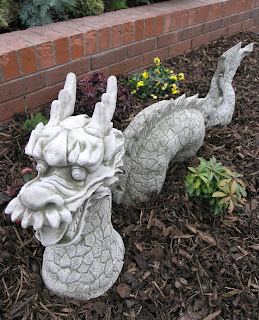 After I published my last post I got to wondering if some people (my relatives, ha!) think I'm a bit too fey and whimsical for this world. They must be thinking: "A Celtic Garden? Wow, she's really gone off the deep end this time!"

If they only knew that I've been thinking of adding even more to my garden. Did the ancient Celts believe in dragons or was that a later invention? Anyway, there are some cool dragon statues out there. I could have (a smallish) one with a sign that says "Here Be Dragons".

How about griffins/gryphons? Are they an ancient Celtic thing?  I'll have to do some research on them and on dragons. 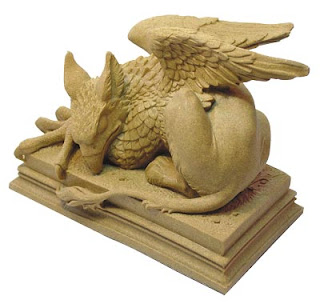 How about really nice statues of King Arthur and Guinevere? 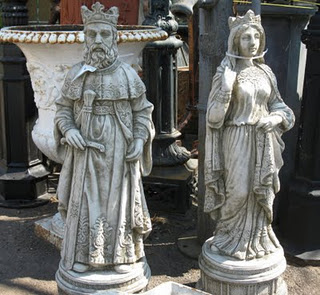 Actually - and sadly -  these statues are not available here. My blogging friend Kath (Hillside Cottage) from Glastonbury, England, found them at a Reclaim Yard, which I think is similar to a salvage yard here. Kath has her eye on them and I hope she gets them. I will be envious but will be happy that a friend has them. 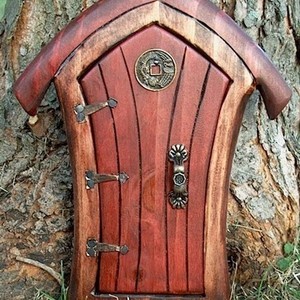 Or what if I added a fairy door at the base of a tree? It could go with the sign I have that says: "There are fairies at the bottom of the garden." There are many, many fairy doors available online in every design imaginable.

Seeing this door reminds me of the fairy doors in Ann Arbor, MI. The first public fairy door appeared in 2005, on the exterior of Sweetwaters Coffee and Tea. Since then, ten more have shown up around the city (as well as a "goblin door" parody), and seven of the original "public" doors still exist.

The fairy doors have taken on a cult following in Ann Arbor. The local children leave gifts in the hopes that real fairies will receive them. Some presents left at the doors include pennies and nickels, drawings, tiny packages, candies, and shiny rocks. Some of the doors have guestbooks nearby for visitors to write reflections and stories, draw fairies, and ask questions. Sometimes a "fairy" will answer the questions in the journals. 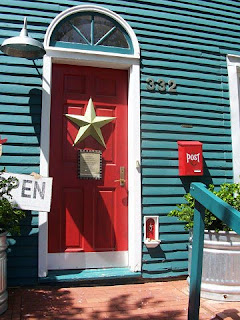 The Ann Arbor Red Shoes shop and
its accompanying fairy door.﻿
The Ann Arbor Chamber of Commerce and some businesses hand out maps and sell copies of Jonathan B. Wright's Who's Behind the Fairy Doors? and posters with pictures of each door and its location. The general attitude toward the fairy doors is that of mysticism and childlike adoration.

There's also a famous little Elf House at Lake Harriet in Minneapolis, MN. At the first hint of fall in the air, the tiny elf locks up his small rounded door in the ash tree on the south side of the lake and begins his long journey west for winter. On the first day of spring, "Mr. Little Guy", fondly dubbed by locals, returns home to a tiny pile of notes and gifts left by children who visited his tree home. 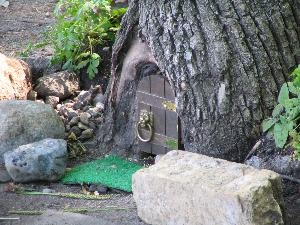 Local legend says the shy elf responds to every single letter he receives, sometimes up to 1,500 or more a year. The enchanting story of Twin Cities' most popular elf resident has even caught national attention, yet his identity remains a magical mystery. Walk around the popular Minneapolis lake and keep your eyes open for a hollowed-out tree with a garden in front.

Some people aren't content just locating fairy and elf doors. A week or ago I read a newspaper story about the craze of creating Fairy Gardens. These gardens - either outdoor or indoor tabletop versions - are captivating the imaginations of children and adults alike, providing an escape into a tiny world. "It takes us all back into that magical time when it was all for real," says one fairy garden creator.

Here's the link to the article online:

The website Enchanted Gardens (http://www.miniature-gardens.com) is a really great (and inexpensive) site for supplies for your fairy garden, including miniature fairy houses, furniture, bridges, fences, flowers and animals. Here's their Hobbit House: 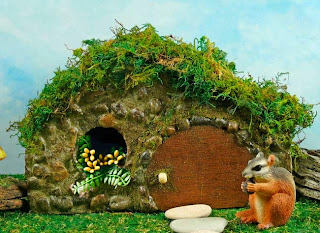 Being from Bismarck, I'd have to add a prairie dog,

since ND is famous for its prairie dog towns. 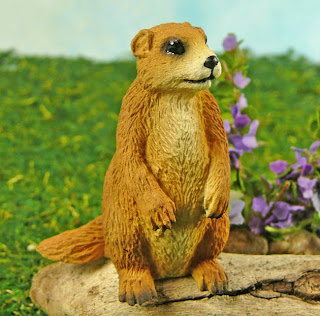 Some gardens can be really elaborate.The Fairy's Garden site (http://www.thefairysgarden.com/) provides complete instructions for the formal garden below. Sometimes even real plants are used, and actual water for the ponds and streams. 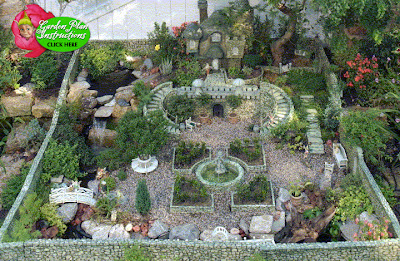 All the accouterments can be purchased
from The Fairy's Garden site.


It's evident to me this latest craze is just an extension of people's fascination with miniatures, (usually expressed in the form of doll houses), which has been with us forever.

So you see, there are a lot of people in the world like me, who choose being whimsical over being depressed, who create fantasy rather than wreaking havoc, who make people smile instead of making them sad, who resort to escapism when harsh reality threatens to overwhelm them.
But truth be told, I must now leave the Enchanted Forest, or La-La Land, or wherever I live when I'm not totally present, and get down to the real-life task of planting my tulip and daffodil bulbs and clearing some ground on which to scatter annual seeds for overwintering. I am a terrible procrastinator and I can be really creative at it - and writing this post was one example.

NOTE: Being fey and whimsical must appeal to some people out there. Today I found out that the number of people who are followers on my blog total 300! Who are you all? Where are you from? Why not drop a note (post a comment)?
Posted by Julie at 2:12 PM

Love the "who you are."
Your garden will be spectacular and i hope you share ideas and views all along the way.

Anything you gift to the Universe - is an out-picturing - an Expression of the Beautiful YOU - Unique and Wonderful in all the world . . .

I, for one, relish your whimsically fey attitude. I am lusting after that griffon, the dragon, AND the King Arthur statue. I don't have a big enough (old enough) tree for a fairy door yet, but maybe in a few more years. I have thought of putting one by the gate on our fence! Love this post! (p.s. I do have a small chair on my hearth for a brownie, or elf, or house fairy)!!

Oh, you are definitely not alone and you definitely made me smile! I love your whimsicalness and the ideas you share. My daughter turns 11 today and I am proud to announce that she received her acceptance letter from Hogwarts! I've spent weeks getting together various "school supplies" that were put together in an old trunk. How is that for spending time on whimsy! I have had a blast! I have not seen the fairy doors in Ann Arbor, but have heard about them from a friend that lives there. There is a website: http://urban-fairies.com/ It is delightful and I hope one day to visit. I didn't know about the Elf House at Lake Harriet, that shall also go on my "To Visit" list. Thank you for brightening my day! (P.S. I'm originally from New York City but I live in Bozeman, Montana -- since you asked!)

Robin -- We also have younger trees, not big enough for fairy door (also, my wise husband says it is not good to bang nails into living trees as it exposes them to infection). But I got myself a tree stump from someone selling firewood and plan to adorn it with a fairy door I acquired some time ago. My daughter and I have also been long fans of building fairy houses wherever we find ourselves. Check this out for more info: http://www.fairyhouses.com/ AND we have also become fans of building miniature fairy gardens. A local store began selling items for fairy gardens a couple of years ago and we have been having much fun with it. So many wonderful, whimsical, and creative expressions of the magical spirit!

What fun! I have a fairy door at the base of a very old, hollow apple tree.
There is a dragon like that, in our reclaim yard, I love him!
Robin, you could always put a fairy door in the skirting board of your sitting room :-D

Love your post and you have some beautiful fantasy statues!
I show my husband the fairies doors and I sure wont to have one for my house!
Greetings from Belgium,
Liliane

Absolutely love your blog. I'm Morgaine... I do have a fairy door, which I love. I live in New Mexico, but am currently in Scotland. I live a lot of my life "between worlds" and just love coming here to your oasis of beauty.

I have the statue Guinevere. If your interested in purchasing it email me at remcoy_223@hotmail.com