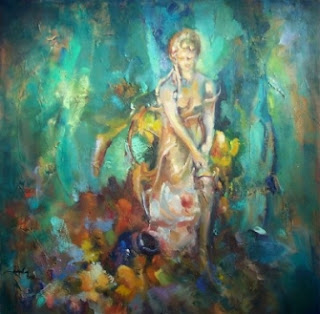 "GARDEN GODDESS", painting by Sandra Bos
I have my very own Garden Goddess! She could be the one above, or she could be this one: 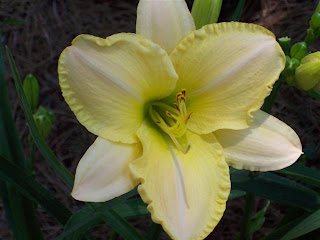 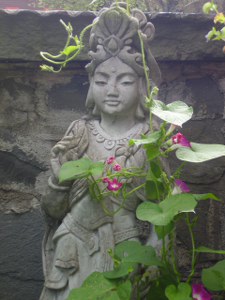 She could be the statue above, or the one below. 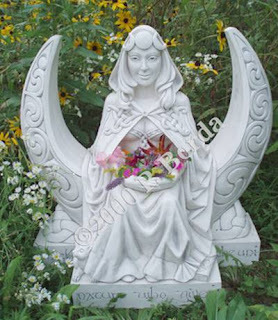 But she is none of those. My Garden Goddess is a real, living, breathing woman!

Let me back up a bit. The main reason I haven't been blogging much this summer is that I returned to gardening after a long absence. That meant that my flower beds and yard were very overgrown. I have been feverishly planting, weeding, deadheading, fertilizing, cutting back grapevine. In addition, I have had a couple of guys assisting me with the heavy stuff. The first one I hired, back in May, was my niece's boyfriend. He was really fast and a whiz with the chain saw.  But then the flooding started and since he works in the moving business he became too busy to help me any more.

So then I hired a guy who did quite a bit of the heavy work, including cutting down more saplings, moving large paving blocks, removing some railroad ties and rototilling and amending three small garden beds. However, he turned out to be a less-than-desirable employee.

Just last weekend I finally caught up on planting after getting 15 hostas in the ground and moving some annuals to better spots. The front yard actually looked pretty good, and I breathed a sigh of relief.

That relief was short lived, however, as I did some baaad, baaad things. I bought some Black-eyed Susans, a Russian Sage and Carpathian Bellflowers on impulse at a home improvement store. I also answered online ads from a couple of local ladies who were dividing their perennials. I visited both homes and came away with armloads of daylilies, irises, a peony, some Asiatic lilies, liatris, phlox and a couple of bergenia (which I've never grown).

When I got home and unpacked my plants, I panicked. Here it is the end of August and I'm planning on leaving for vacation in a week. Every muscle in my lower back and legs hurts. I have worked through this pain for months hoping it was just "getting in shape" stiffness and soreness, but it never went away. I thought,  "I just can't do this anymore!" I was finally at the end of my rope, with a whole bunch more plants to get in the ground, and no more garden beds ready.

Fortunately, I was rescued by the same site that got me into trouble in the first place. The ad placed at bismanonline by "Garden Goddess", aka Vicki, was a god(des)send to me. Vicki came over Friday afternoon, took the tour, listened to my plans/dreams and added some ideas of her own. Saturday afternoon she came over ready to work, and within a couple of hours she had moved a bunch of rocks, re-located the paving blocks, dug up and amended a small garden bed and planted a lot of those plants. She'll be over on Tuesday to dig up another bed and plant the daylilies. (To give me just a little credit, I did get the irises and bergenias planted Saturday evening.)

Thank the heavens above and whatever gods or goddesses may have been involved in helping me find my very own Garden Goddess!
Posted by Julie at 2:39 PM

So glad you found Vicky, what a great blessing!! I love the combination of plants in your garden. Next growing season will be spectacular. Hope your back feels better soon!!!

I just adore that painting! Your garden sounds lovely! Your pictures are so inspiring.

its lovely you have found your gardening mojo again julie, and lovely that you can deputise some of the work to Vicki! looking forward to photos!

Wow! I am so porud to hear that you got inspired to garden again!
You know so lmuch about it!

And you deserve to have that wonderful Garden Goddess to help you!
I hope your vacation is going great this week!!!

I ADORE those goddess statues! Where di you find them? Please tell me they are available online!