Minot, the Magic City
The Souris River at Minot, ND, is receding - albeit very slowly. It left behind 4,000 flooded homes and 300 businesses.  11,000 people have had to find somewhere else to live. I titled this post Memories of Minot, but I hope the title does not foreshadow what might become of Minot - a place where only memories are left.

Minot calls itself the Magic City and to me as a child it was magic. Minot is about 100 miles from my little hometown of Larson, ND. My family traveled there once, at the most twice a year. I remember being unable to sleep the night before our trips - that's how excited I was.
We made an annual trip to Minot to buy school clothes - usually at the Sears store at Arrowhead Shopping Center. Yes, Minot had a couple of shopping centers, although Arrowhead and Oak Park (now destroyed) were much smaller than today's Dakota Square Mall. 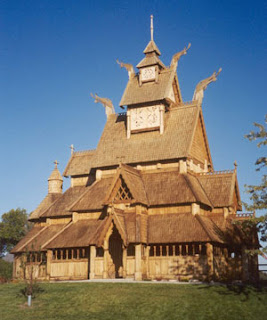 Full-size replica of the Norwegian Gol Stave
Church at Minot's Scandinavian Heritage Park
Minot was also where we could buy things not available in the small towns near us. For me, it was a chance to obtain books! I would always check to see if a new Mary Stewart romance/mystery had come out in paperback.

We also had lunch at places like Kentucky Fried Chicken or Bonanza steak house. That was fine dining for us!

Before we were able to do all that, though, we had to wait while dad did his business at Reeve's. Dad owned a one-man refrigeration business, and Reeve's Refrigeration was where he ordered his parts. But of course, before he got down to business, there was a lot of chewing the fat with Mr. and Mrs. Reeves. For us kids, it was a crashing bore and it ate into our fun time. 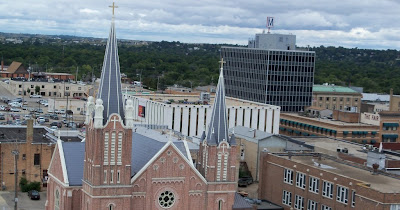 Downtown Minot
Even more rare than my family's trips to Minot were the trips my grandma and aunt made to visit my Uncle Billy. Gram and Mary would board the Greyhound Bus in Crosby and alert the driver that he had to make a special stop at Larson for my mom and me.

Billy lived at the Roosevelt Hotel in downtown Minot and worked at the nearby White's Creamery. I thought that living in a motel was the ultimate. Oh, the Roosevelt, with its transom doors, dusty hall carpets and old-fashioned sinks with rust stains from dripping taps. How I loved it! At night, we heard thrilling city sounds like police, fire and ambulance sirens that never disturbed our sleep at home.
Trips to Minot meant eating at Charlie's Main Street Cafe and a visit to Ellison's Department Store, both downtown. This of course, was before the big mall was built. Since my family hardly ever ate out, much less ate fried foods, I really enjoyed my deep-fried chicken dinner at Charlie's. 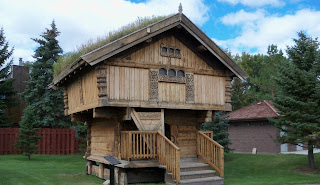 Stabbur (Storehouse) at Scandinavian Heritage Park
One especially exciting time, Grandma, Mary and I boarded the Great Northern Railroad and traveled all the way to Whitefish, Montana to visit my Great Aunt Jennie. That trip is still so vivid to me that I remember the cute red tiered skirt I wore and my skinned knee that became infected from a fall on a Minot sidewalk.
When I was a senior, my class took a trip to Minot for Skip Day - erm, Career Day. We toured the Minot State College campus and visited Columbus High students who were attending MSC. Afterward, the senior girls walked downtown and  had a blast at the Woolworth's store, buying makeup and cheap jewelry. On our way home the bus stopped for burgers at Auto Dine, my first ever fast food experience. 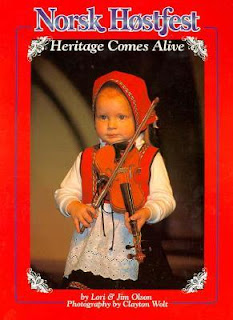 In recent years, my sister and I would travel to Minot to attend the Norsk Hostfest, America's largest Scandinavian festival, with food, vendors and entertainment galore. We always made sure to visit the antique shops downtown and have a lemonade at Charlie's, which was still open and still going strong.
We'd also visit the enclave of charming little gift shops all located in stately older homes just north of Broadway Bridge. Those shops were right along the Souris or a block away from it, and I don't know if they made it through the flood.
No trip to Minot was complete without a trip to the Homesteader Restaurant for "lunch". This is not the noon meal but the 4:00 afternoon coffee break that people in Scandinavian communities like Minot call lunch.

Looking down Broadway Avenue,
Minot's main thoroughfare
Minot may not be my home town, as it is Josh Duhamel's, but I have such fond memories of it. I hope its residents return and rebuild, and soon, so that I can begin building more memories of the Magic City.﻿

Enjoyed reading your stroll down Minot memory lane. Those are precious memories.

Great memories - let's hope it is able to return.

Lovely childhood memories and I like the photos of the Scandinavian Heritage Park - at least the water is receding now and people can begin to try and rebuild their lives though it will be a long process I'm afraid.

Love this post...happy 4th of July!

Thanks for the Memory tour! One of my best friends is from that area...I'm sure she is reading your blog! I can imagine her visits to Minot as she was growing up...after reading your post!

thank you for this. i love hearing about towns like this and the lifestyle. good read.