BISMARCK BRACING FOR A FIGHT 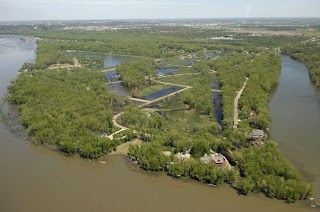 Fox Island in South Bismarck,
first area to be flooded


The sky is blue and the sun is shining. The tulips and apple trees are in full bloom and the lilacs will be completely open in just a couple of days. We should be deliriously happy that spring is here at last. But a lot of residents of South Bismarck and Mandan are shocked, sad, worried and angry.
They're shocked that they should be dealing with a flood, in May, long after the snow has melted. They're sad and worried that they may lose their homes. And rather than being angry at Mother Nature, a lot are angry at the U.S. Corps of Engineers. They're directly blaming the Corps for this flood.﻿ 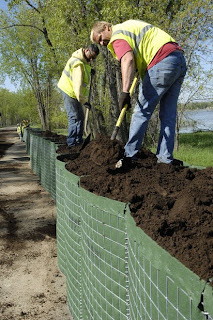 Hesko Basket Dike going
up in South Bismarck
﻿Here's the scenario: A huge snow pack in the mountains of Montana is now melting. This, combined with heavy rains in Montana the past week (3 inches in Billings on Tuesday) is putting heavy pressure first on the Yellowstone River in that state and then on the Missouri River as it converges with the Yellowstone in western North Dakota. This leads to extreme pressure on Garrison Dam 75 miles north of Bismarck.
All of a sudden, the citizens of our twin cities are hearing numbers and phrases we were never concerned with before. The abbreviation cfs, one which few of us knew about until now, is now at the forefront of our minds. Currently the dam is releasing water at the rate of 75,000 cfs - cubic feet per second. That's already an astronomical figure for the dam (previous highest level was 64,200 cfs), but it will increase to 80,000 cfs tomorrow and 85,000 cfs on Monday! (It takes about 1 1/2 days for this released water to reach Bismarck-Mandan.)
Another set of numbers people are talking about is flood stage. The current water level is 15.5 feet. Flood stage is 16 feet. At this time, the contingency plan is for an 18-foot flood. But depending on who's talking, the river could crest at 20, even 22 feet. 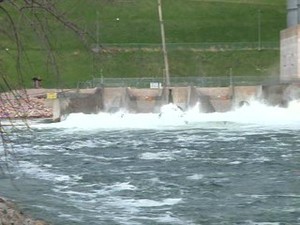 Water comes thundering out of
Garrison Dam, May 24, 2011
And, the Corp is "not ruling out" larger releases. This has generated a lot of anger. People feel helpless because the Corps has complete power over the river system, and many see it as an unfeeling, uncaring government entity. Lots of people have also expressed the opinion that the Corps has known about this snow pack for a long time and could have alleviated the situation by beginning releases a while ago.

I'm not getting into any political arguments about this. ﻿My home won't be affected unless the unthinkable happens and Garrison Dam bursts. That would be catastrophic for everyone in south central North Dakota. However, the Corps reports that "the system of dams (in MT and ND) is operating as designed." And I am going to put my faith in that.

But I do feel so bad for the residents of south Bismarck who are frantically trying to save their homes, including the boss at my new temporary job. He reported this morning that although his home is still dry, he has huge carp swimming in his yard and swans floating through the trees. 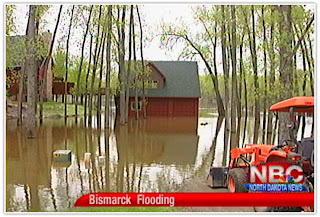 ﻿
The city of Bismarck isn't wasting time assigning blame. It's swung into high gear, aiming its efforts at containing a 100-year flood. To compound matters, this is also an unusual type of flood. The problem is not just overland flooding. The ground water levels in South Bismarck are also extremely high. As astonishing as it may sound, this flood may go on for weeks or months. My boss has already evacuated and plans to be away from home for two months.

Meanwhile, people in the south part of town are frantically trying to figure out what will happen in their neighborhoods. One sees many people with global positioners in hand, taking readings to see if their home elevations are "safe" or not. Outdated maps, too many variables and confusing answers to "how high should I sandbag?" add to the frustration.

The ND National Guard has sent 600 hundred soldiers to help in the sandbagging, traffic control and levee patrol efforts. Individual homeowners are building sandbag ring dikes around their properties or have banded together to enclose entire blocks. The city is building earthen levies and  installing Hesko Basket Dikes. Pre-assembled structures which can be filled with sand on site, these dikes are relatively new in flood fighting. They were used in flood fighting in Fargo but have never been tried here. 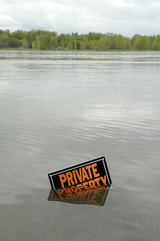 Submerged sign near Fox Island﻿
Stores are selling out of GPS devices, sump pumps and related materials. The animals are being evacuated from Dakota Zoo, with zoos from North and South Dakota taking in the creatures. This is by no means easy. As one person put it, you can't just load a zoo animal onto a cattle truck. And of course, it's not just homes but many businesses which will be affected if the entire south side floods. Both cities are sure to see disruptions for months to come.

"This is probably going to go down as the No. 1 flood event for Bismarck," said Todd Sando, the chief engineer for the state Water Commission. A forecast of rain beginning locally tomorrow and lasting all through Memorial Day weekend will only compound the problem. I'll update this situation as it progresses.

Such sadness and helplessness when things like this happen. Thanks for the update.

Holding the area and you in my thoughts. Please feel free to send your rain down to us in north Texas. We're parched! Too much water where we don't need it and not enough where we do.

The news of all the devastation in various areas of the USA is appalling, it must be heartbreaking to have your home affected or destroyed by flooding, tornadoes etc. So glad that you are on high enough ground to be safe.

As Rowan said, this is utterly appalling. Its hard for me to sit here, half a world away, and fully imagine what it must be like for residents there. I am very glad that you and your home should be safe Julie, but feel so concerned for those in dangers path.

sending love and prayers that the worst doesnt happen...

Sad that it is not on national news. I wish everyone the best.