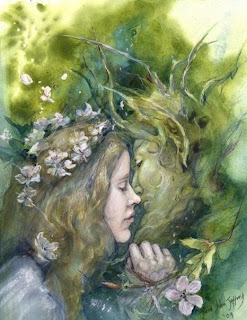 
Tonight is the Eve of Beltane, one of the two most important Celtic festivals of the year, or, as we Americans know it, May Day. It is properly observed from sunset April 30 to sunset May 1.

I am so bummed out this Eve of Beltane. First, because we are having a blizzard here! Yes, a ton of snow and wind are combining to make for a nasty spring snowstorm in Bismarck. Will spring ever arrive here?

The second reason is that I have lost something near and very dear to me. It was a blog, of all things, a blog I shared with another person. It was called Ancestral Sisters, and it was about two young women in Britannia (Great Britain) in ancient Celtic times; two kindred spirits who could scry each other through fire (my character) and water (the other character). 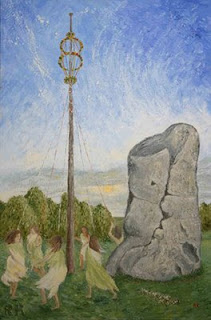 The two of us took turns writing posts in character. My character, Aine (Anya), was a herbalist and healer who lived in Southern England. The other young woman was the keeper of a well in Ireland.

For my part, I did a lot of research on the daily life of the Ancient Celts and I scoured the web for dozens and dozens of paintings to accompany my posts. I wrote about Aine's life - her village, her hut and her companion animals; the preparations for and the celebrations of the major Celtic holidays; her work in growing  plants and in making medicines; her visits to a trade fair, a solo trip to the shore to gather seaside plants and a sacred trip with others across southern England to Stonehenge and the sacred tor at Glastonbury. 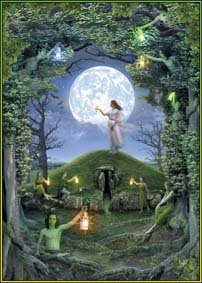 Fairy Ring Oracle
Illustrator Paul Mason
-
Have I impressed upon you how hard I worked on the research and the writing, and how much this was a labor of love? There was enough there for a short book.

And now it is gone, "disappeared" by the other writer. Granted, I had not written on the blog for quite a while, but I expected it to be there forever and that I could draw upon it at anytime. And now it is lost to me forever. This was a bitter truth for me to learn, and for for all you bloggers to take a lesson from, especially those of you who share a blog. If you love something you've written or artwork or photos, save it somewhere else as a backup. 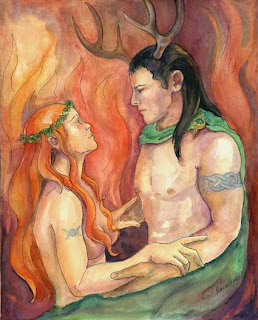 "BELTANE LORD AND LADY", Margaret Harwood
I had intended to use Aine's Beltane celebration for today's post, but now I will have to share with you a post I wrote at Beltane a couple of years ago:

On Beltane (or Beltaine) Eve and its counterpart, Samhain Eve (or Halloween), the veil between the two worlds is at its thinnest. But unlike Samhain, when spirits of the dead roam the world, on Beltane Eve it is the fairies who are returning from their winter respite, carefree and full of fairy delight and mischief. Beware, tonight the Queen of the Fairies will ride out on her white steed to entice humans away to fairyland. If you hear the bells on her horse, turn your face away, or she may choose you!

Beltane is a Gaelic festival, celebrated by those in Ireland, Scotland, and the Isle of Man. (Other Celts, like those in Wales and Gaul, had similar spring celebrations). The name Beltane means bright fire, bale fire, or Fire of Bel (Bel or Belinos being the Sun God). Halfway between the vernal equinox and the summer solstice, this day marks the beginning of the bright half of the year. 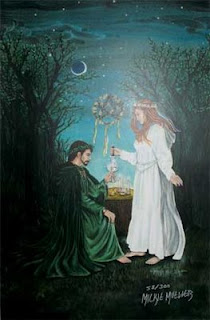 "BELTANE GROVE" by Mickie Mueller
http://www.mickiemuellerart.com/
Preparations for Beltane began with gathering flowers for the Maypole and for wearing on the body and in the hair. Young men went May boughing or May birching, gathering garlands of hawthorn (Mayflower) and rowan (mountain ash) to hang over doorways and windows. On the Isle of Man, the youngest child of a family would gather primroses to throw against the door of the house for protection.

From the woods, villagers gathered nine different types of sacred wood. From this wood, two giant bonfires, or need fires, were built on top of a hill. The villagers drove domestic animals between the two fires to purify and protect themselves and the animals, insure their fertility, and bring luck. People also jumped over the bonfires (hopefully after they had died down a bit) in a fertility ritual. In Scotland, boughs of juniper were added to the fire for purification and blessing.

The Beltane celebration honored life over death and celebrated the rebirth of the world. Above all, it was a fertility festival, a symbolic union of the God and Goddess, of the divine masculine and the divine feminine. A young virgin, often dressed in white with a crown of flowers, was chosen to be the Queen of the May. Her consort went by many names, including the Green Man, the May Groom, the May King, and Jack-of-the-Green, often dressed in green and decorated with leaves. 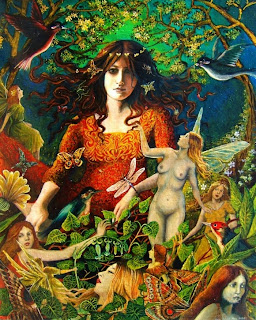 In Scotland, bannocks (or oatcakes), were passed around in a bonnet. One bannock had been blackened by the fire, and the person choosing the blackened bannock became The Fool. It was the hope that all misfortune would henceforth fall on The Fool and no one else. Poor Fool, he also had to jump over the bonfire three times.

After the fires died down, the youth of the village would slip into the woods to go "A-Maying", to act out in reality the symbolic joining of the God and Goddess. No wonder they sing about "The Lusty Month of May" in "Camelot".

May Day morning, the young people would emerge from the woods, perhaps mussed and disheveled, to dance around the Maypole, gaily decorated with colorful ribbons, flowers, leaves and garlands. Flowers were put in baskets and left on doorsteps for those who were too ill or too old to participate in the festival. From that, we get our modern day May baskets. 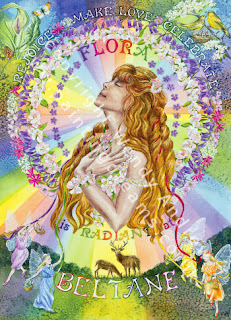 Beltane was serious business for the Celts. They believed that the wheel of the sky would not turn without their intervention, and they did everything in their power - with their fires, celebrations and rituals - to ensure that summer returned each year.

Beltane was celebrated in English villages up into the 1950s. The festivities came to include mummers' plays, Morris dancing, riding the hobby horse, feasting and drinking. Beltane is still celebrated in some areas. My dear English blogging friend Leanne (Dorset Days/Somerset Seasons) went to Glastonbury today, lucky, lucky lady. Tonight, the Beltane Fire Festival on Calton Hill in Edinburgh, Scotland, will attract 12,000 to 15,000 people.

Because of the blizzard (and city regulations, ha!), there will be no May bonfires for me tonight here in Bismarck, and certainly no creeping into the woods to go "A-Maying." Instead, I will play "Huron Beltane Fire Dance" by Loreena McKennitt a number of times. Since I can never listen to this music without dancing, I'll do a little springtime dance of my own, and maybe that will improve my spirits a bit. 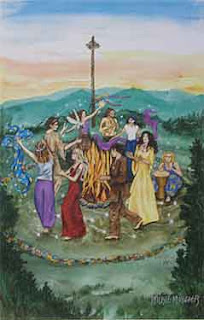 "DANCING THE CIRCLE" by Mickie Mueller
Posted by Julie at 5:04 PM

So terrible about the loss of your hard work; and on top of that a blizzard! Thanks for the very nice post about Beltane, and enjoy Loreena's beautiful music. I raise a glass to you and yours on this Beltane night!

As I recall, you don't have speakers hooked to your computer, but I'll bet you have the CD it's from. Feast your eyes,

Blessed Beltane to you and your dears! For the new in your life will come!

firstly, all the blessings of Beltane to you Julie.I am sorry you've lost a precious writing, and that your weather is still being unfriendly.
I now have all my photos from yesterday up on my blog, spread over three posts lol, plus a little message there for you too. Do take a look at all the pics, i am sure you will take some comfort from the 'remote sharing' that blogs allow us. I realise how truly blessed we are here to live in this ancient land, with its history and its magic. both are tangible, if you are open to them you can feel them. next time I go Julie, I will leave an offering in your name, a little connection for you to focus on when you feel a little low.

It's "Calton Hill" in Edinburgh. I saw some of the rehearsal for the festival, but I did not attend the actual event.

Happy Beltane dear Celtic Lady ! I always loved that day!
I hope the snow will melt really soon ! Have a happy springtime dance and have a lovely month !!
:0)

First of all, to everyone who commented, thanks for the sweet Beltane wishes and commiserations over the loss of my work and the weather.

Hope - Thanks for the info. I have corrected the name.

Leanne - thank you, dear. I'm over to your blog right now.

Sorry to hear about your blog. Beltane Blessings to you )O(

A belated Happy Beltane Julie - I've been away so am a little late. How sad that your shared blog has gone, as I read youir description of it I was thinking how very much I would have enjoyed reading it.

Hello Julie! I see my friends Leanne and WOL are already here. I thought I'd come over and visit you properly, having been introduced by Leanne.
Your Blog is quite divine and I lok forward to reading more, especially as I am a Welsh celt and my Husband Irish.
Hapy Belated Beltane and please come visit me often, you are most welcome.
Blessings from Glastonbury, Kath