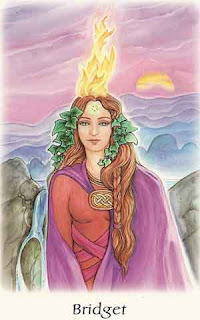 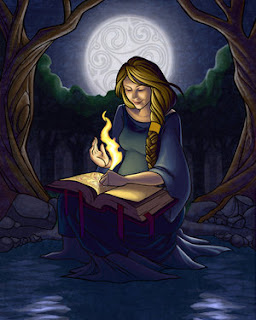 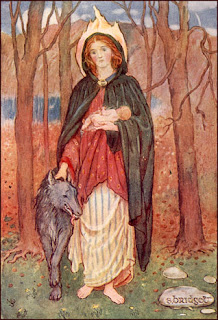 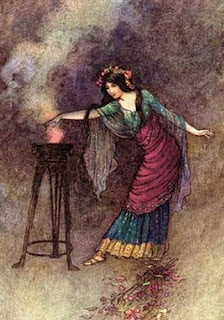 lovely images of my favorite goddess, thanks. Love the boiling water in frigid. I feel your winter misery...not quite as cold here in the syracuse ny area, (3 degrees F), but we do have several feet of snow. Blessings of Imbolc to you! Robin.

What Joy! Thank you for sharing the fun of tossing boiling water into the cold . . i can hardly wait to give it a go right here. Your post is brilliant (as always)
All Best to You!
-g-

Loved the youtube and making snow. Way cool, for sure. -23 degrees??? My gosh, how do you guys stand it? Do you even go out?

Enjoyed all the info on St. Bridget and her earlier incarnation. There is something every month from you like this and it's always so enjoyable.

Amazing and such fun! Fortunately though I think we shall never have the fun here - I'm not complaining mind you, I'm happy to watch someone else do it.

The first image of Brigid reminds me of that line from the Yeats poem, "Oh, I went down to the hazel wood because a fire was in my head" -- it's been set to music, which is how I first encountered it.

This Judy Collins rendition is the only version I could find of it, but I have heard other versions with a slightly different tune. There's a version by Karen Casey I especially like.

As you pointed out, Brigid was a triple goddess, with one of her aspects being the patroness of blacksmiths. The forging of iron by fire and hammer blows echos Imbolc as a time of initiation and transition. Through birth a baby is initiated into life, and a woman into motherhood. As the beginning of the growing season, it marks the transition from the death of winter to the new life of spring. It marks the passage of the initiate from the ignorance outside the circle to the wisdom within it.

We had record cold of -18 today.
If I had read this earlier, I could have tried the boiling water toss!
This is Arkansas, not North Dakota!

So how is Julie, I love this post...I never thought of throwing boiling water into the cold...hummm!
Hugs, Mary