BELIEVE IT OR NOT, I LOVE HOCKEY 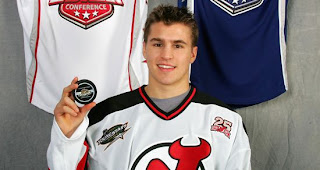 ZACH PARISI, TEAM USA
Note: Added Wednesday afternoon: Congratulations to Zach Parisi who scored the two goals in Team USA's 2-0 win over Switzerland today. After the second goal the NBC announcer called him "one of the best players in the NHL" and "the heart and soul of Team USA hockey". Go, Zach! (Also kudos to goalie Ryan Miller for his shutout.) On to the semi-finals!
Anyone who reads my blog regularly is probably shocked to see me posting about hockey. But hockey is in my blood, having attended the University of North Dakota in Grand Forks, a Division I hockey school. I know way more about hockey than about US football (boring!!).
I won't tell you exactly how many years ago it was, but I first started attending UND Sioux hockey games in the old UNHEATED "barn". That took dedication. I actually met my husband-to-be after a hockey game, when my girlfriends and I went to the Gaslight Lounge to thaw out. (Yes, I met my husband in a bar, and it has lasted all these years.)
By the time Dan and I returned to Grand Forks after a three-year hiatus, UND had built the new Engelstad Arena, and Dan and I were game regulars in that comfortable, shirt-sleeve-wearing environment. I had graduated by that time, but Dan was a student and so we sat in the student section, where all the action was. This was the time when most of the UND hockey players were Canadians and it was a very rowdy sport. A common occurrence was to see rubber chickens tossed onto the ice, or if we were playing the University of Wisconsin Badgers, a real dead badger. We could look forward to lots of fights breaking out, especially with Wisconsin players, or those from the University of Minnesota, our biggest rivals.
I must admit, old meek and mild me enjoyed watching these fights. When dozens of gloves dropped on the ice, it was a signal that a brouhaha was about to begin! I think I must have gotten rid of a lot of frustration, vicariously! After Dan left school, we bought season tickets, but instead of sitting in our assigned seats among the "oldsters", we still gravitated to the student section. As our friends graduated and moved away, we used our seats, but it was never as much fun. 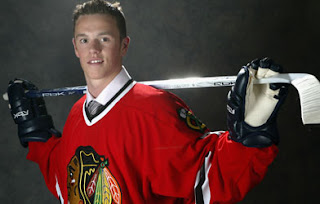 JONATHAN TOEWES, TEAM CANADA
Over the years, the UND Sioux hockey team has won seven, count 'em, seven Frozen Four national college hockey championships and played in many others. When they won the 7th, they naturally had to bring out shirts that said "Magnificent Seventh."
UND hockey has changed over the (too) many years since I attended my first game. Now, a majority of the players are American. Minnesota led the way with home-grown hockey players, but North Dakota schools were also building their hockey programs and turning out excellent players. While fights have not been totally eliminated, today's hockey is way more gentlemanly than in days past. Now, the team plays in the glorious, state of the art, new Ralph Englestad Arena, which I have never been in.
Yesterday, Team USA met Team Canada on Olympic ice, with Team USA winning. I was torn as to which team to root for, because two former UND players were competing against each other. Jonathan Toewes (pronounced Taves), shown above,  is originally from Winnipeg, Manitoba, Canada, and now plays for the Chicago Black Hawks. He is on Team Canada. Zachary (Zach) Parisi (shown at the top of the post), grew up in Faribault, Minnesota, and now plays for the New Jersey Devils. He is on Team USA. Both teams will be playing again, so good luck to both Toewes and Parisi! 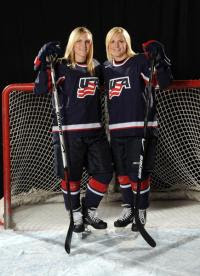 MONIQUE (L) AND JOCELYNE LAMOUREAUX
Now we must focus our attention on the Team USA women's hockey players, especially two members. Monique and Jocelyne Lamoureaux grew up in Grand Forks! Both have already been instrumental in helping Team USA advance. The Twins, or the Lams, as they are called, are 20-year-olds and are described as "virtually identical, with virtually identical skills and virtually identical stats."
An Internet article on cleveland.com states: "Their dominance is no surprise. The twins grew up playing hockey on a frozen creek near their house with their four older brothers. Mom Linda would blow a whistle when it was time to come in, and she would chastise the girls for complaining if the boys were too rough. Says Monique: "If we ever cried, my mom would say, 'You'd better toughen up.'"
Monique and Jocelyne are attending the University of Minnesota right now, and are members of the U of M hockey team, but both are transferring to UND and will play for them next season. Woot!
All four of the twins' brothers are involved in hockey, and two of them are associated with UND. Pierre-Paul is an assistant UND hockey coach, and Mario is a UND forward who scored several goals this past weekend in UND's sweep of the University of Minnesota-Duluth. Their father, Pierre, was a UND goalie for the national championship teams in 1980 and 1982. Sports Illustrated magazine recently featured the entire Lamoureaux family. Good luck Monique and Jocelyne! 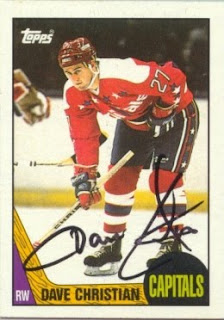 DAVE CHRISTIAN
Of all the UND Olympians past and present, Dave Christian is my utmost favorite. A member of the Miracle on Ice Team that unexpectedly defeated the powerhouse Russian team in 1980 (and went on to win the gold medal), he was outshadowed in the media by other players who gained more notoriety. But we didn't care, Davey was one of our own. Christian, from Warroad, Minnesota, is a member of a US hockey dynasty. The Christian Brothers are famous for their hockey exploits and for their manufacture of the primo Christian Brothers hockey stick. After UND, Christian played for the Winnipeg Jets, the Washington Capitals, the Chicago Black Hawks, the Boston Bruins and the St. Louis Blues.
I doubt that any hockey games still to come in the 2010 Olympics will be as dramatic or as crucial as the Miracle on Ice game, but I will be enjoying them and the fact that unlike most viewers I know all about faceoffs, icing, cross checking, high sticking and the like.
Posted by Julie at 6:55 PM

I've been enjoying the Olympics on TV. Missed the Hockey game but will watch later ones. We have professional hockey here in Az. too. I've been to a couple of games. Not a big fan...but always like to cheer on the home team.Have a great week!

Good information - you really know your stuff. Don and I were watching the hockey game last night, I was doing some hand stitching and commented that I kept losing track of who had the puck - and Don said that I must pay attention only to the game - no looking back and forth to my handwork like in baseball.

I must admit I know next to nothing about hockey! But HB likes it. And we've been enjoying all the Olympic games.

Ice hockey isn't a big sport in the UK though it is played and Sheffield Steelers are one of the top UK teams. In the past I've been to see them several times and enjoyed the atmosphere though I didn't actually have much clue what was going on!

Another uber hocky fan here, Julie. I grew up in the days of Stan Mikita, Bobby and Dennis Hull, Tony Esposito, then on to Keith Magnuson, etc. While it is rare for me to catch a game today, I still love those Chicago Blackhawks. I wear my jersey proudly, I tell you. I heard the USA vs. Canada game the other night was phenomenal!

I will be watching Hockey today, I am not a fan. Since the USA is playing Canada today, I will check in to see how we did. Tonight should be fun, they will have the ending night program.
So how is Julie, winter is coming to an end....someday. We have frost on everything this morning, it changes daily.
Have a soft Sunday, Mary