TRY TO REMEMBER THE KIND OF SEPTEMBER 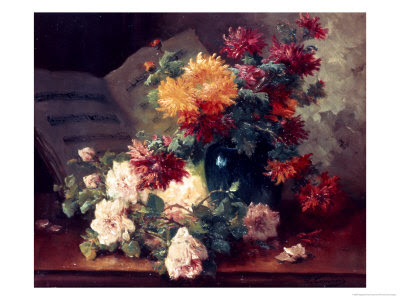 "CHRYSANTHEMUMS AND ROSES" by Eugene Henri Cauchois
Recently I wrote that I didn't need a turn of the calendar page to tell me that it is fall. Another thing I don't need - yet - is the store displays full of bright orange pumpkins, black cats and crows and scarlet and vermilion maple leaves.

Let's not rush the season. Let's appreciate some of the more mellow colors of September - the yellows, the tawny golds and the ochres; the wheats and the straws; the rusts and the russets and the bronzes; the bricks and the burgundies; the nut and fawn and cocoa and deep browns; the purples and the mauves and the plums; the blues; the light greens; the faded and rosy reds.

It's a time of year when you can make an Old Master's flower bouquet, mixing the light pink roses of late summer with the burgundies of autumn.

(Today I still had a couple of roses on one of my Morden Pink shrubs.)

It's a time when the meadows are full of rolled hay bales, like so many giant pieces of shredded wheat. (When I was a kid, I wouldn't eat shredded wheat because I thought it would taste like hay.) I think hay is definitely one of the elusive scents of autumn that I have previously written about.

I don't know where this picture was painted, but it certainly could be set along the Missouri River near Bismarck.

"GOLDEN LIGHT ON THE PRAIRIE" by Robert Frost (Frosty) Paris
It's a time to rejoice in golden slanted light, and the gold of North Dakota's aspens (cottonwood trees), among the first of our trees to turn. Who says yellow fall leaves aren't stunning too? And look at those tawny and russet grasses, will you?

(Frosty Paris is a local artist - from Mandan, ND.) 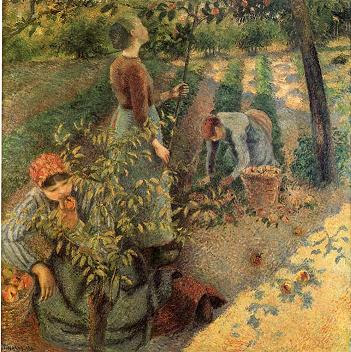 September - when apples are harvested. We don't have many (any?) apple orchards in North Dakota, but I do cherish an early fall trip we took along the Mississippi River on the Wisconsin-Minnesota border. We headed north from La Crescent, MN, famous for its apple festivals. 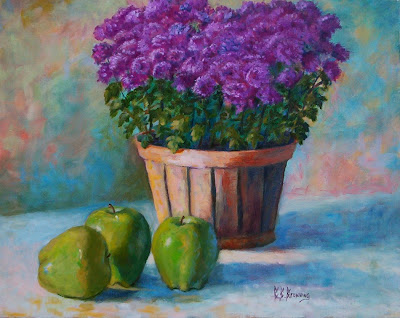 "GREEN APPLES AND MUMS" by Beth Browning
September, when garden centers are filled with purple, yellow, burgundy and bronze-colored mums for adding instant color to a fading garden. I love those slatted wooden baskets they come in. And oh, the tang of a chrysanthemum blossom! 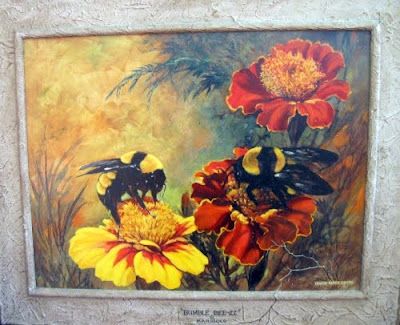 "BUMBLE BEE-ZZ" by Ernest Beach Smith
It's during this month that the marigold takes center stage in the garden, with its bright yellows, pale oranges and dark rusty reds. Marigolds are another flower with that sharp, tangy scent. 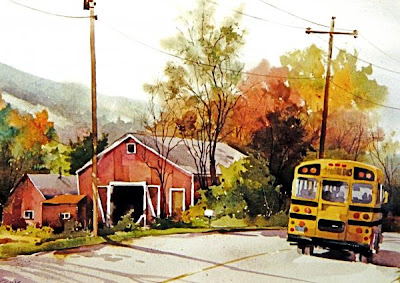 No matter how old I get, September will always be about boarding the school bus to begin another year at the high school in town. I love this painting for the way the golden-yellow of the bus and the faded red of the outbuildings are mirrored by the trees. 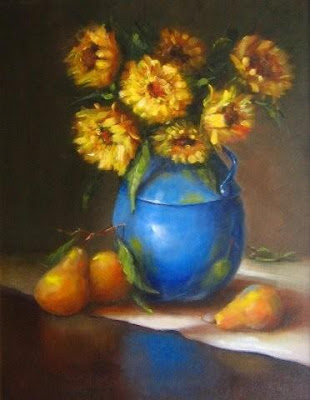 "PEARS AND FLOWERS" by Lois Wooster

Early fall is a time when the golden yellow flowers take over from the pinks, lavenders and blues of summer.

As with apples, North Dakota doesn't have many pear trees. The painting above reminds me of the only pear tree I've ever seen. Our book club used to take an annual September trip to the Judge's Chambers, a former home turned restaurant and gift shop at Napoleon, ND. Its yard had a pear tree that hung over one of the tables out on the deck.

Since our visit was on a warm fall day, we asked to sit out on the deck. The owners demurred, saying the fallen pears were attracting hordes of wasps, but the members of the club insisted that we do so anyway (they're sort of pushy that way). The owners relented, we cleared away the pears ourselves - salvaging the ones we could - and sat in the slanting afternoon light, waving away the few remaining wasps that hovered over our soft drinks. 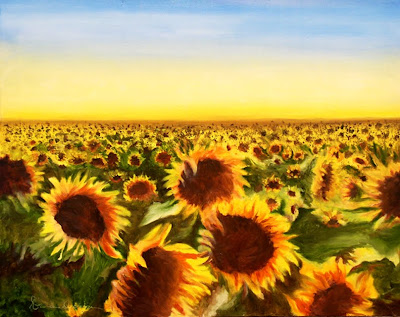 I chose this painting out of dozens available of sunflower field paintings, because it really emphasizes that not only are sunflowers golden, they're also the most gorgeous velvety brown.
And in North Dakota, sunflower fields do go on forever. 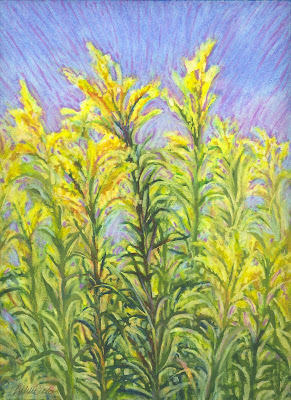 "GOLDENROD - SOUTHERN ALBERTA" by Nikki Coulombe
As a child, I was always so sad to see goldenrod bloom, because it meant the end of summer and the start of school. Now, I welcome my first glimpse of it, and am so happy that it is no longer blamed for causing hay fever (that's ragweed). 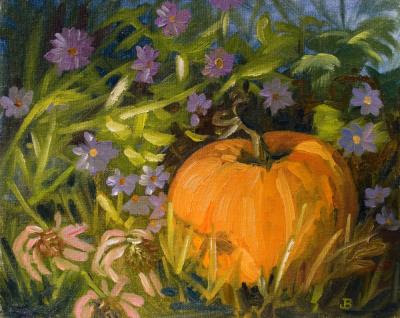 "ASTERS AND A PUMPKIN" by Jan Blencowe
This is the only painting I'm allowing with a pumpkin in it! That's because it's the only good painting I could find of New England asters. Plus, the pumpkin is a light orange rather than a reddish orange. It has a late-garden feel instead of Halloween-y feel to it. Aren't the purples and blues of fall are a perfect contrast to her yellows, golds and oranges?
Come October, I will be ready for the red oranges and the black, the scarlets and vermilions. But for now, I will:
"Try to remember the kind of September,
When life was slow and oh so mellow,
Try to remember the kind of September
When grass was green and grain so yellow . . ."
Posted by Julie at 8:26 PM

These are paintings that truly show the colors of Autumn and things that happen around the countryside at this lovely season.
I love this time of year - even though I'll be doing my annual moaning and groaning about reseeding the grass, having to water same for several weeks, then raking the zillions of fallen leaves later! But I do still love to jump in the piles!

Thanks for sharing the paintings Julie.
Warm Autumn hugs - Mary.

Oh do you wax poetic! I loved reading your words, seeing the lovely art pieces you chose to exemplify the words. Autumn is my favorite season. Rarely do I think of Halloween...except for the nights when the soughing winds take hold of the dying leaves and sweep them down the streets with whispers. I love the autumn colors, every last one of them...The scents that are hard to describe (elusive, yes)...The something in the air...

What lovely photos, and a lovely tribute to the ending of summer.

Thank you for the reminder to enjoy every moment ..and not rush into anything..this is what worries me about our "instant" generation - they don't take the time to really enjoy where they are right now..everything is fast..phone..TV..books on their hand-held thingy..Geesh! I'm sounding WAY old..but really, enjoying the journey IS what it's all about..let's not rush into anything, but stop and appreciate all of it..thanks for the reminder and the lovely art work!

Beautiful pictures. I love this time of year, and like you I don't want to rush it :-)

Oh I love the school house barn one. Thanks fore sharing your kind of September it was lovely...

Don't forget the occasional wisp and scent of woodsmoke in the air as some of us start a fire in the fireplace just for the fun of it! But we do have an excuse - it's September and fall is upon us.

What a gorgeous post! Thank you for keeping us in September, the loveliest month of the year (to my way of thinking).

i so agree, each month to be savored for what it holds, i love september colours. How i should love to see one of those fields full of sunflowers, how stunning. *ruthie*

Your observations are poetry.
I will always remember this kind of September,it's unforgettable. So are your fantastic descriptions of it.

Hello Julie, I love this post, sooo beautiful. And yes I do remember the very moving song, but I don't remember who sang it, was he Irish ? No, it was the Greech singer Nana Mouskouri, wasn't she ?
I love you Julie for this sweet memorie and all the fall colours you've presented this early septembre.
Godeliva van Ariadone

Can i take a one or two pic in this blog? i really want to had them. nice blog thanks for sharing.

Yes, of course you may. I took them from the Internet myself. Just be sure to give credit to the artist, as I always try to do.