MY FAVORITE PEEPS - AND A NAUGHTY DOG 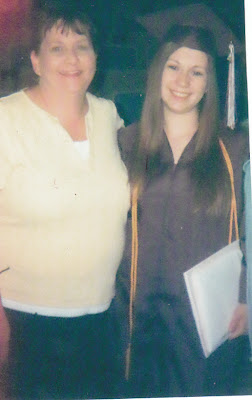 MY SIS, GLORI, AND MY NIECE, KELSEY
(NEPHW MIKE SKIPPED OUT BEFORE THE PHOTOS)
I was taking pictures at graduation recently, when I happened to look at the writing on the paper sleeve of the instant camera. It said, use by (xxx month) 2007. 2007?? Gaah - I freaked out. I had not realized the camera was that old. Thankfully, I had known there were only a few shots left on this film, so I had brought along another camera and was able to finished my picture taking.
I was aware that I might not get any good pictures at all from film that old, but I had them developed anyway. I was pleasantly surprised to get what I did.
I apologize for the quality of these pictures. Some are dark, and in some, I had to crop out a lot of red (see upper left corner of first picture). So, consequently, they are not the best, but they do at least give some glimpses of my favorite people! (All the pictures look better enlarged, so just click on the photo to enlarge it.)
As I indicated, the first picture is of my wonderful sister and her sweet daughter. Kelsey, by the way, is one of the VALEDICTORIANS of the BHS class of 2009. Kelsey, we are extremely proud of you. Yeah - we're a little club - two smart sisters and their two smart daughters. All four of us were either valedictorians or graduates of highest distinction in high school, college and/or graduate school. My mom would have been so proud! 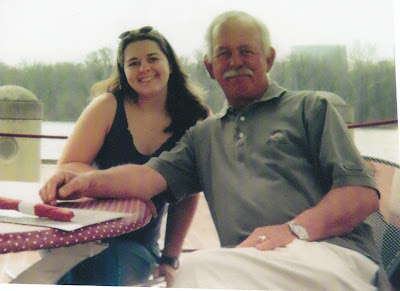 KRISTEN AND DAN
Then, a photo of my dear daughter and my beloved husband. When I saw this picture I knew exactly how old the camera was. These shots were taken after Dan drove Kristen's new (used) car out to Washington, DC in March 2007!! (Yeah, you wouldn't see them sitting outside in shirt sleeves in March in ND!)

And finally, my wonderful (ahem) dog, Gracie, in a series of three photos that tell a little story: 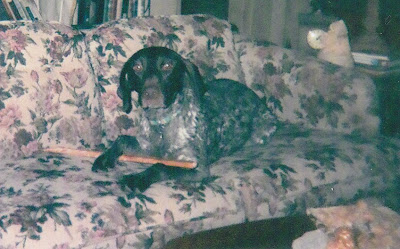 ME: (Sternly) "I don't think that's an ordinary old stick. That's one of the slats from the baby gate that was meant to keep you in the kitchen.
GRACIE: (Looking very guilty) "I sorry, Mom!" 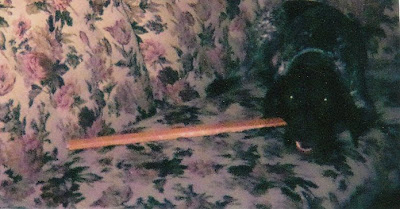 GRACIE: "But not so sorry that I'm gonna quit chewing on it!!"

Great pictures. Fun to see pix of your people. Congratulations to Kelsy! Both Dan and Kristen are good looking. Would ya look at Gracie? She is too funny!

Well it proves thatold doesn't always mean it's no good, doesn't it, haha. Lovely photos. Your husband and daughter look so happy sitting there together.

And your naughty dog - well tell her she has a brother here in England that can and is just as naughty. We use a baby gate as well.

i was searching for you among the pics! Darn, that's just so unfair that you didn't include yourself in it.
hey, what a lovely family you got there, julie...the dog included, hahaha!
always,
xoxoxoxoxo

Wonderful pictures and what a wonderful story about Gracie!

Thanks for sharing the photos of your cute, smart family (including Gracie!).
Hope you have some shirt-sleeve weather soon, with summer and your birthday coming right up!

I love seeing photos of you family - your hubs looks so kind :-)

And as for Gracie? Well, you know that "stick" must have been calling out her name ..and the Au juice? "Awe, come on Mom - you know I can't refuse your cooking!"
heehee!

Grace sounds alittle like our LB...he is so sweet but does do some NO NO's! So cuteJuly, gave me a giggle! Your pictures are a treasure..
My link to the new blog is on the left. It says Leaves Of Time. I would love for you to read what I have done so far.
Big Love, Mary

What a clever family you are:) Congratulations to Kelsy. That's a really lovely photo of Dan and Kristin - as for Daisy! She does look cute though:)

Awww... Gracie is sooo adorable! You wouldn't want a dog without spunk LOL Your pictures are all wonderful. Thank you for sharing. I can see you are all smart ladies :>)

Hi Julie,
I love whimsy and rose colored glasses so will enjoy following along. I am Scottish and Welsh and my DH is Nordic (AKA…the Viking.) I have had fun researching a bit of my family genealogy and learning about my Scottish past.
Cathy

What lovely photos - such dear people - and ohhh that Gracie. :-)

what a telanted family, congratulations to you all. Aren't photos of family precious things. what a rogue that gracie is, but so cute with it!!!!