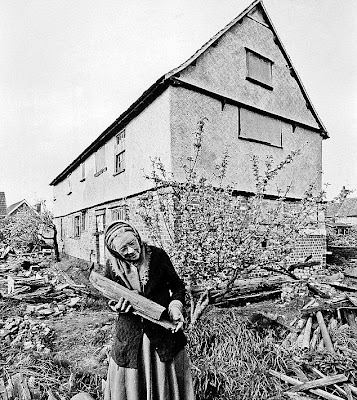 MAY SAVIDGE CARRYING TIMBERS
TO THE MOVING TRUCK
(Doesn't she remind you of Tasha Tudor?)
By now, everyone with a TV or computer knows about the amazing story of British (Scottish) opera singer Susan Boyle, who has wowed everyone with her appearance on Britain's Got Talent. She's been lauded by critics and viewers alike for her pluck and determination.

Thanks to Annie at "Bimbimbie", I have learned about another amazing British woman - albeit from another era. Meet May Savidge, who single-handedly dismantled her 15th Century home, had it trucked 100 miles from Hertfordshire to Norfolk and rebuilt it brick by brick! She did this in defiance of developers who wanted to demolish her house for a road project.

"I just won't have such a marvellous old house bulldozed to the ground," she once said. "I've got nothing to do all day, so I might as well do the job myself."

Accompanied only by her beloved dog, Sasha, May spent 23 years on the project, moving oak timbers and ceiling beams, hand-cut floorboards, roof tiles, Tudor fireplaces, Elizabethan leaded glass, and all. May began her project circa 1969 and worked up until her death in 1993 at age 82. Sadly, the house was still not finished. In tribute to May, her niece, Christine Adams, finished the house and turned it into a bed and breakfast called Ware Hall House.

May was also a collector extraordinaire, and Adams was able to finance the completion of the restoration by selling May's belongings and memorabilia.

Adams has now written a book about May called "A Lifetime in the Building: The Extraordinary Story of May Savidge and the House She Moved" (by Christine Adams with Michael Mahon, Aurum Press May 2009).


The book is not just about brick and mortar. It also details May's life, including her two tragic love affairs - the first ending with the death of her fiance and the second with her being jilted after a 17-year courtship by a man whom she believed would marry her.

I plan to purchase this book as soon as I can find a used copy. I truly admire this woman. She puts lazy ol' me to shame.

In 1971 she told an English woman's club: "My mother brought us up on the maxim that there's no such word as can't." Talk about British pluck and determination!

Here's a link to a feature story about May Savidge:

Wow - that is an amazing story - I have to say I skipped the part about her life so I will be surprised when I read the book - if I can find it. Thanks for telling us about it.

What an inspiration. Next time I am taking baby steps I will remember to keep on truckin'...
Yes she does look like Tasha Tudor.

Annie's story at Bimbimbie was fantastics. I posted it at Facebook and you have posted it here. Too true. Anyone with a computer/tv has no doubt been exposed to this amazing story.

What an amazing story, I hadn't come across this before, May was quite a woman by the sound of it.I'm glad the house was saved though it's a pity they added a conservatory, it spoils the lovely Tudor lines of the original and I rather suspect that May wouldn't have approved.

What a tale! Thank you for sharing it. I guess I have little excuse for the 15-year-plan-that-is-starting-to-look-like-a-30-year-plan for my own home!

That sounds wonderful! I must read that as well. I love stories of strong women - both physically and mentally - make me proud to be of the same gender :-) I had not heard about this previously - so thanks for sharing (I must be living under a rock!)

What a great story. I hadn't heard it before. I must follow the link you gave us and read up on her.
Thanks for sharing this Julie..
xx

I thought of Tasha Tudor right away!
2 women who lived their dream even when it was difficult!

wonderful! what a determined and inspiring lady. yes, its on UK amazon and Ive added it to my wishlist!

PS I forgot to say, the original site of the house, in Ware, is just a few miles from where i was born!
leanne x

This is truly an amazing story. Thank you for sharing. I'm off to check out the link on your post. I hope you have a lovely day. Thank you for the lovely comments on my post.

Thank you for giving me yet again another great story. I'll keep my eye out for this book....it sounds like something I would love.

what an amazing story. such determination & courage. thank you for sharing this!! how exciting that your birthday & anniversary are coming up very soon x