NOT FIT FOR MAN OR BEAST 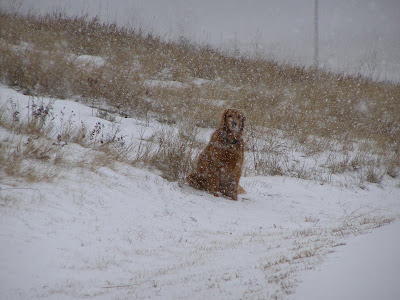 (CLICK ON PHOTO TO ENLARGE
AND SEE THE SNOW FALLING)
**********
It's not fit weather for man or beast here in Bismarck. It's fit only for Golden Retrievers, who love snow. The dog in the above photo is another Bismarck Golden, not my Penny, but it could very well be her, because it looks so much like her. However, Penny would have a red ball in her mouth. But no matter what Golden Retriever you would be looking at, they would be looking back and saying, "What's the matter with you? Why aren't you playing with me???"
A week or so ago, Bismarck broke the record for the most snowfall in December since 1916. Overnight, we broke the record for the most snowfall in ANY MONTH, EVER. As of this morning, we have now received 33 inches of snow this month.
That amount does not include the snow from the blizzard that walloped us in November.
This morning I had to say goodbye to my daughter, who left for balmy (relatively speaking) Washington, DC. She was happy to leave. Not that she didn't have a great time here, but she had enough of our weather before her first full day had ended. It didn't help that I got stuck in my driveway yesterday and she had to help shovel out and push the car.
So she went joyfully home to her boyfriend and her kitties and I am left with the prospects of: missing her, bleak and empty January, Arctic blasts, still more snow, short days and long nights, post-holiday letdown, being broke, high fuel bills, aches and pains, etc. etc. It's a recipe for depression if I've ever seen one.
But I am not going to let myself succumb. Instead, I am going to beat my blues by traveling around the world! In fact, I have already taken a quick trip to the Isle of Guernsey in the English Channel. My guides to the island, who introduced me to all the delightful inhabitants, were Mary Ann Shaffer and Annie Barrows. With their help, I learned all about the members of "The Guernsey Literary and Potato Peel Pie Society."
Right now I'm in gloriously warm and sunny California. Dean Koontz, bless his heart, treated me to a visit to the home of heart transplant recipient Ryan Perry. I'm helping Ryan solve the mystery of why he's being tormented by nightmares and receiving strange gifts and messages that say "Your Heart Belongs to Me."
After my return from California, I'll be going to Nantucket. I've always wanted to visit this charming island 30 miles off the coast of Massachusetts. However, I'll be there under very strange circumstances indeed. It seems as if a truly odd event has occurred which has propelled the entire world - except the island of Nantucket - into 1250 B.C. The sea captain for this adventure is S. M. Stirling and this voyage to the "Island in the Sea of Time" is the first of three trips I'll be taking with him. My husband is already onboard and he says it is a very exciting, though extremely dangerous ride.
Later, I'll come forward in time to 1930s Manhattan's Upper East Side, where Lily Koppel will introduce me to brilliant, precocious and headstrong teenager Florence Wolfson and her "Red Leather Diary". Later we'll fly to present-day Florida , where Florence now lives.
From Florida I'll be going to rural Wisconsin with David Wroblewski. He'll be taking me to meet a mute boy and his beloved dogs to hear his tale, "The Story of Edgar Sawtelle".
To round off my January travels, I'll be doing two things I've never done: visiting Africa and flying in a small plane. I'll be going "West With the Night" with 1930s African bush pilot Beryl Markham. I've been told I'll meet some of the same people I met when I visited Karin Blixen (Isak Dinesen) in Kenya in "Out of Africa."
That should take me into February, and by then we should have longer, warmer, sunnier days here. And if not, then I'm getting into Anne Easter Smith's time machine and going back to the 15th-century court of King Richard III of England to view "A Rose for the Crown".
Added later:
I completely forgot to add that I have also planned a return trip to Norway in January. I'm going back to visit an old friend, "Kristin Lavransdatter". My guide once again to the Gudbrandsdal valley of medieval Norway is Sigrid Undset. This time, she will be taking along my entire book club! I am particularly fond of visiting here, for this is where my grandmother grew up.
Posted by Julie at 12:08 PM

I enjoy reading Dean Koontz and what a clever way for you to point out a book title. I haven't read this one. Right now I'm reading "V - The Second Generation". Did you watch the "V" mini-series from the 80's? Good stuff and now there is a follow-up book. I'm loving remeeting all the old characters.

Sounds like you have some fun "travels" planned. I've already read a couple of the books you listed - and I'm now reading "Fire in the Mind" - a biography of Joseph Campbell - fascinating.

Sorry to hear about all the snow - ours is disappearing slowly in our yard - faster down the hill in town. Ben and I spent some time this afternoon shoveling what is left of it onto the slide and watching it race down to the ground - a fun game for any age.

I can just not imagine that much snow. I won't even say it sounds fun, cause I know it isn't for you.

If you would like to visit me, I can take you to a sunny beach, through australian bush where the temps will get up over 40 degrees celsius... I can make you some ice cold rose water which we can sip very elegantly while sitting on my deck in the shade...just close your eyes, click your heels and you will be here (hugs)... wanting to wish you a very, very blessed and peaceful 2009...

I hope that weather will be not as horrible for you! Nice thing in winter is that we have more time for books, isn't it? :) So, enjoy your travels - I'm reading "Marianna i róże" (Marianna and roses) now - it's book based on a diaries and letters of citizens of my state in end of 19th century - it's so exciting, when you read about your own city in years ago!
Take care Julie!
Hugs from Poland!

Oh, your "travels" sound wonderful! I have some of those same plans, so we may pass each other along the way.
Safe "travels" and be so very careful with all that snow! It's cold and slippery here, but nothing like what you are experiencing. My thoughts are with you- and safe travels to your daughter as well..here's to seeing our beautiful daughters again very soon in 2009!
Colleen

What wonderful travels you have planned! I just might join you! I'll waive if I see you. Stay warm... and dry :) HAPPY NEW YEAR!

You are going to have some fun adventures! I like to read Dean Koontz because he puts in California places I recognize. I've been doing a lot of reading,too and the weather here isn't bad. I just love to read.
Hugs, Susan

You sound like you're going to have a wonderful time :-) Enjoy your travels in January. Wish you all the best for the new year.

The weather this year has been so strange...we're back to the frigid temps after having rain the day after Christmas! Still tons of snow, though, and lots more is expected. I think I'll start traveling with you! hehe Losing oneself in a book is the best way to beat the blues:-)

Wishing you and yours all the very best that 2009 has to offer, dear Julie. xoxo

Dearest Julie...
Ahhh would love to join you in visiting some of those places.
Stopping here with a heart full of love and warm New Years wishes.