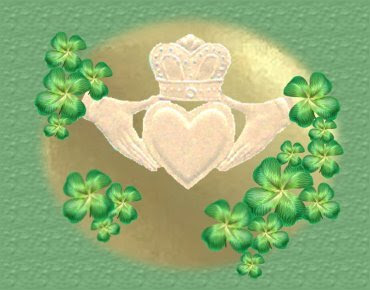 NOTE: I wrote this post on Saturday, March 17, 2007. Since no one was reading my blog back then, I thought I would reprint it this year.
This is only the second St. Patrick's Day that I've known I am of Irish descent. Before then, I didn't know who my birth father was. After being contacted by a second cousin who found me out of the blue, it turns out I am a Cody through my paternal grandmother. I have a great-great-grandmother named Bridget Cody. How Irish is that? I might even be distantly related to famed American frontiersman Buffalo Bill Cody. (My Cody family genealogist cousin is still working on that one.)
I have mixed feelings about this, being rather bitter that I missed out on celebrating my Irish heritage from childhood on, as I was able celebrate my Scottish and especially, Norwegian heritages. I have always FELT Irish, if that makes any sense. When I was a kid I even fibbed about being Irish on St. Patrick's Day. For years after I grew up, I wore an "Irish At Heart" pin. When I was researching the Scottish Munro clan, I discovered that the Munros may have come from Ireland. "There's the connection! I am validated!", I thought. Now that I know without a doubt that I am one quarter Irish, I feel that I should celebrate the day in some way.
However, I didn't wish to drink green beer, wear a stupid plastic green hat, and go around spouting "Sure and Begorrah” and "Erin Go Bragh.” Neither my husband nor I are into corned beef and cabbage. There are no Irish parades in this primarily German city. Thanks to my Irish-by-marriage niece Lisa Kelly, who has sent me St. Patrick’s Day boxes for years, I have a large collection of Irish decorations. However, I didn't put them up this year. (Lisa is incredible. Only she would think to send me a pair of her daughter's Irish dance shoes. Such a personal and authentic touch to add to an Irish vignette!)
I don't like the images of Irish people as drunks and Paddys. I don't like silly little leprechauns and pots o’gold. I'm not good at blarney and hopefully I'm not too maudlin.I did wear green today, even though I was seen by only two other people, who were working overtime like me. I also pinned on my four Irish pins: a shamrock, two claddaghs and an Irish angel holding a shamrock (all four are small, so I pin them on in a diamond pattern to make a bigger impact).
After work I brought out my collection of vintage St. Patrick's Day postcards to peruse. They are part of my collection of holiday cards from the Golden Age of Postcards from the turn of the century to the 1930s. I am lucky to have some Ellen Clapsaddle cards, as they are highly valued.
But what else could I do? I searched some websites about St. Patrick’s Day celebrations and came up with only one that spoke to me. If I lived in a large city, I would have leaped at the first suggestion: to attend a play by an Irish playwright, like John Millington Synge. However, the next suggestion was appealing: have a glass of Irish whiskey, sit by a fire, and read some good Irish stories, poetry and ballads.
Thanks to Lisa, I have just the book: "Ireland in Poetry", edited by Charles Sullivan. It's a collection of poems by Irish poets, dating from the Celts to modern-day writers. They are accompanied by a selection of drawings, paintings, sculptures and photographs by Irish artists.
William Butler Yeats once wrote,"Wherever green is worn, a terrible beauty is born." Ireland's troubled history is full of terrible beauty and terrible tragedy. What is admirable about this book, the jacket says, is that it covers both sides - that of the green (the Republic of Ireland) and the orange (Northern Ireland), the Catholics and the Prods (Protestants).
I don't have any Irish whiskey, and probably wouldn't like it if I did, but I am going to have a glass - or two at the most - of Black Velvet, a nice Canadian whiskey. Better than a couple of pitchers of green beer any day, and a much better way to spend a St. Patrick's Day evening. I will read my book, sip my whiskey and raise my glass and say Slainte! (rather than the Skoal that I was brought up to say). I will toast all the Codys I have never met, and never will.
And I will save my celebrating for a true Celtic holiday like Alban Eiler, Beltane or Samhain. Meanwhile, for all of you, an Irish poem with which I was already familiar (see below), and this greeting: “Beannachtai La Fheile Padraig Duit” (In Gaelic: Blessings of Saint Patrick's Day.)
*****
THE LAKE ISLE OF INNISFREE
*****
I will arise and go now, and go to Innisfree,
And a small cabin build there, of clay and wattles made:
Nine bean-rows will I have there, and a hive for the honeybee,
And live alone in the bee-loud glade.
*****
And I shall have some peace there, for peace comes dropping slow,
Dropping from the veils of the morning to where the cricket sings;
There midnight's all aglimmer, and noon a purple glow,
And evening full of linnet's wings
*****
I will arise and go now, for always night and day
I hear lake water lapping with low sounds by the shore;
While I stand on the roadway, or on the pavements grey,
I hear it in the deep heart's core.
*****
William Butler Yeats (1865-1939 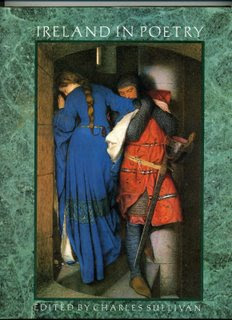 "MEETING ON THE TURRET STAIRS"
Fredrick Burton
Posted by Julie at 11:05 PM

My husband is Northern Ireland born and bred. He emigrated to Canada in the 1970s and being a child, lost his Irish accent (darn it). He has never celebrated St. Patrick's Day and scoffs at who does.

When my kids were younger and their school encouraged them to wear green, I always told them they had the green Irish blood and were probably more Irish than anyone else in their school. One year my son spent some time pinching his arm, looking for that green blood. It was quite difficult trying to explain what I meant by that remark!

Hubby has rubbed off on me and so I always say bah humbug to St. Paddy's day and wait for our birthdays to celebrate instead. My son was totally bummed out this year, however, to learn that no ~ this is not an official holiday and yes he DOES have to go to school. One can always hope for the impossible, eh?!

Here is a site celtic lady might like - i am sending them a link to you as well:

What a lovely tribute to your Irish heritage. You are so right that most of the time people portray the Irish in a less than flattering way. I think you've done it with dignity and grace and good taste. Not everyone wants to wear a green hat and drink green beer!

PS - My children are half Irish.

I watched Celtic Woman last night on PBS and found myself thinking of you. Because your blog touched me. My Great Grandmother on my Mothers side (Pershie Durbin) is my only known full blooded Irish
descendent. I need to go through pictures and put Pershie's picture on my blog. My husband Arney has all the Irish and Welch. His Grandfather's name(Willy Lee Neely). Arney D. Evans...Welch through and through. So I am Irish Indian and he is a Irish Welchman...Oh my Goodness.
I have a folder filled with family history...it's fun.
I am so glad you now know that you have a bit of the old sod in yee...you and I are both Cancer's...I am July 12th (born).
Happy Day! Mary

Happy St. Patrick's Day, dear Julie! I found out a few years ago by talking to one of my aunts and uncles that I do have some Irish blood in me. I haven't looked into how that came about but I know it would be interesting to find out!! The only way I've ever celebrated St. Patrick's Day was when my boys were little and I would always make green jello and cupcakes with green frosting on them...they would also wear green to school. That's as far as it went! lol Hope your day is a wonderful one my friend. xox

Ran across your blog tonight. Happy Saint Patrick's Day! I like your blog

I grow up with a family that did all those silly things on St. Patrick’s Day…
As a teen I would just roll my eyes, never thought I would miss it...but I do…

Happy St. Patrick's Day, Julie - even though I am a day late! "The Lake Isle of Innisfree" is one of my favorite poems - thanks for posting it to remind me how lovely it is!

Hi Julie, This post got me to thinking about The Quiet Man, one of my most favorite movies ever. My son's mother-in-law calls Don, Michaleen, because she thinks he looks so much like Barry Fitzgerald (old character actor). Don's celtic through and through. I have narry a drop but my dad used to call my Italian mom Mediterrean Irish. So - there is a bit of family lore. And I love the word "bit". Hugs, Annie

I love your new Banner (header)...it was love at first site!
Not much happening here, I am working on a small album for my soon to be six year old Granddaughter Alexis. And I have this sinus thing going on and it is in my ear...but I am on meds.
Top of the morning to Ya! Mary

Beautiful poem, Julie, and Butler's painting is bursting with passion.