SPRING, WHAT SPRING? WHERE?? 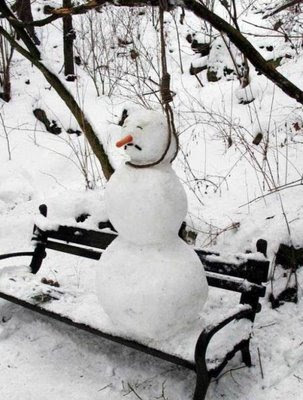 Welcome to Bismarck, the Blizzard Capital of the World. We have received 17 inches of snow since last evening, and it's not over yet. It is now the second snowiest winter on record in Bismarck since record keeping began. We need only a couple of more inches to top the record and I'm betting we will. It's not uncommon for us to have heavy, wet snows way into April. Since we are so close, I do hope we break the record. What's a couple more inches to us?
The mall, most businesses and offices are closed and the Interstate is shut down between Dickinson and Bismarck - again. The plows haven't even come down our street today. They are busy plowing the emergency snow routes. Do I sound like a broken record?
I know, I had promised not to write another post about snow this season. But really -- really --this is getting out of hand. Just 13 until Easter? You've got to be kidding. Somehow we are just not in the mood for cute bunnies and chicks and colored eggs. Ever tried to have an Easter egg hunt in a snow or water filled yard??
March is going out like a lion on crack. All of us here are sick to death of winter, sick to death, I tell you. We are going stark, raving crazy. We can't take it any more. Not even the poor snowmen and women can take it anymore.
As I heard a newscaster say today, We're ready to put Mother Nature on a flight to Vegas. She's not welcome here anymore.
Seriously though, this is bad news. There's about .85 inches of water in this snow. It may start to melt again as early as this weekend. If there is a rapid snow melt there will be a rapid runoff and again we will have to deal with flooding. It isn't just the Missouri and Red Rivers engulfing North Dakota. The Knife, the Cannonball, the Sheyenne, the Heart, the Souris, the Little Missouri - I could go on and on - will again go on the rampage.
The Double Ditch ice jam north of Bismarck is five miles long. The dikes and levees at Fargo-Moorhead are groaning under the stress and strain and may have to endure the pressure for WEEKS yet. Worse yet, roiling waves created by the blizzard's winds are washing against the fortifications. Rivers can have a second crest and the misery starts all over again. Bismarck residents have been warned not to remove their sandbag barriers yet.
There are such sad stories to tell. The cattle that are starving. The 70-ish couple in the Red River Valley who saved their farmyard with sandbags only to have their home burn down. The 99-year old nursing home resident who was so worried about her family's farm.
People have had to part with their "four-legged babies". Hundreds of pets have had to go to shelters and zoos. They include dogs, cats, guinea pigs, birds, rabbits, horses, a potbellied pig, a goat and a mule.
Hundreds of nursing home and assisted living residents have been evacuated to Bismarck and 10 were placed in the nursing home my sister, an RN, works at. Glori told me about this one elderly lady, terminally ill and in hospice care, who had to be flown here. "Here you are, at the end of your life, and all you're doing is just trying to die," my sister said, "and then you have to go through this." That just broke my heart.
So have scenes like the ones I've been witnessing: Cattle bunched together on a tiny, newly created island, cold, wet and miserable. Homeowners surveying their sodden, ruined belongings. Sandbaggers weeping with weariness. Rescue workers who have had only a couple of hours sleep each night for a week or more. The National Guard member who lost his own home.
So please forgive me if I use a little gallows humor today. That's what beleaguered and embattled people do.
Posted by Julie at 2:45 PM

Gallows humor is totally appropriate...I told Lee about my special friend in ND (you). This morning he came in and told me you were having another blizzard there.
He couldn't believe it either.
My whole family is sending love....Whew!

Oh Julie, this is heartbreaking. My heart goes out to all of these people and the poor animals.

I had a sort of epiphany over this past weekend and I am determined to grab that rope, tie a knot in the end, and hold on for all I am worth. I will take hold of the hands that have reached out to me over and over again and I am going to start being grateful for all that I have and not concentrate so much on what I don't have. Your post has put everything in perspective and reinforces what I want to do and where I want to go.

I know I will stumble along the way and I may even fall sometimes but I will pick myself up, dust myself off, and start all over again.

My heart and prayers go out to the beleagured people you have written about today. I will think of them when I am safe in my warm and comfortable bed tonight and I will offer up my prayers for them all.

No need to apologize for your gallows humor. I don't know how you're doing it! I know I would be a raving maniac by now. Just remember you can always come visit me in sunny California! I've had you on my mind so much the past few days. Hang in there. Spring has to arrive soon!

It is hard to believe what you are going through. The pictures are just awful. I can't even begin to imagine such loss. I hope that this nightmare will soon end for you and your community. I will be reading your blog everyday and hoping to hear some good news soon.

My heart is with everyone up north. We don't mind when you post about the snow and the flooding, it's good to get a real perspective on what's going on. Your season has been mind-boggling, and the worst just keeps coming. Please be Safe! We will all keep you and your northern neighbors in our thoughts and prayers.

Oh - my heart breaks for all those suffering so badly from the snow and floods.

As I sleep in my cozy, warm - and dry - bed I will send you all good thoughts - and hopes that Mother Nature will start behaving herself. I don't know how you all are standing it - I wish summer would come along and dry you all out.

You need to share this! That is what we are here for. It isn't all about art and Journaling, and sharing the good stuff. You are a friend and I am praying for this to end. It is awful to think what can happen in such a short time. And the words come to mind "WHY!" Why now, why here? I don't think there is a answer to Why...Only that it brings us to this, how much we love what is most important, Life! It is easy for me to set here and say these things, we had wind here yesterday and tree's fell all over, but not on my house, but I did lose a Bird house...I am just glad there were now Birds living in it yet.
I am rambling on, be safe, be well, we care. Mary

The snowman photo is funny, the situation isn't. I can well believe that you have all seen enough of winter to last you for this year and several more to come. I feel so sorry for the animals especially cattle who are totally reliant on people to move them to safety and/or feed them. Let's hope the thaw is slow but starts very soon and that you get a lovely summer to make up for the dreadful winter.

Julie - so, so sorry for your plight. Our prayers are still for you, the people and the animals suffering through this terrible time.

Mother Nature can be such a cruel beauty.

Julie, I will pray for everyone who is having to endure this. It is truly heartbreaking for so many.
Hugs, Susan

We heard about the snow and it is the last thing you need.
It's understandable that people are beyond tired, both emotionally and physically. It seems everything that can be done has been done, so let's hope it will soon be over. It appears it will get worse before it gets better.
hugs
xx

Trying to send warmth and love - I feel badly when we complain about what amounts to a skiff of snow that hit us again. Prayers to all who are going through this - it's so sad when so many of the elderly, the animals and the wee ones are so negatively impacted.
Take care and hold on - spring's a comin'!

Such awful things happenings out your way. i shall not complain about our wee showers again! Thinking of you all x

Julie, my heart is just breaking for North Dakota. Every thought is a prayer. I called you last week before this lastest seige. The floods were just starting. I'm guessing you never heard the message or in any event could not call. How are phones holding up? Are you stocked with provisions?

Life is'nt fair, Nature can be cruel. Words seem inadequate at such a time....may the end of this terrible winter come soon for you all. thinking of you daily.

I didn't remember the Taetee Freez until your comment...My Dad loved to stop there after a few hours at the beach. I can remember the soft ice cream melting down my arm. So good!
Strange how things happen when you are thinking about other stuff. Arney has to have knee surgery, he had it done about 10 years ago but some of the parts are rubbing and he is in pain. His time of surgery is June first. That was so we could get our self prepared for the 8 weeks off work. We were hoping that he would not need this, but living in pain is not ever a way to live.
Thank you for coming by, I know you have alot on your mind.
Your, Mary