TREAD SOFTLY BECAUSE YOU TREAD ON MY DREAMS 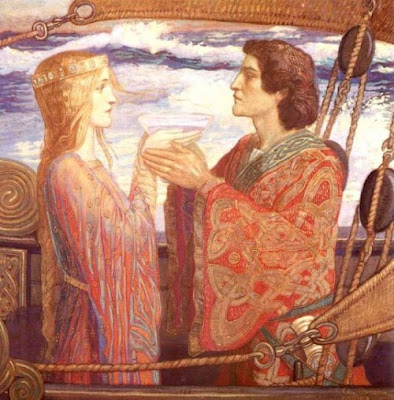 "TRISTAN AND ISOLDE" by John Duncan
**********
I consider William Butler Yeats to be the greatest Irish poets who ever lived, and one of the finest poets of all time.
Yeats was born in Dublin on June 13, 1865. A leader of the Irish Renaissance, he was also a dramatist. He is widely known as one of the foremost writers of the 20th century.
In 1923, he was awarded a Nobel Prize in Literature for what was described as "inspired poetry, which in a highly artistic form gives expression to the spirit of a whole nation." He was the first Irishman so honored. Interestingly, he is among the few Nobel recipients to do his or her best work after receiving the prize.
Yeats wrote lyrical, symbolic poems on pagan Irish themes, such as "The Wanderings of Oisin" in the romantic melancholy tone he believed characteristic of the ancient Celts. He also wrote "The Celtic Twilight" and "The Secret Rose", which deal with Irish legends. 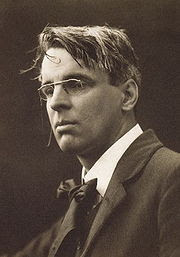 In 1889 Yeats met the beautiful Irish patriot Maud Gonne. He developed an obsessive infatuation with her beauty and outspoken manner, and she was to have a significant and lasting effect on his poetry. He loved her unrequitedly for the rest of his life. As well as inspiring much of his early work, she drew him into the Irish nationalist movement.
Yeats was 51 in 1916 when he proposed to Gonne for the last time. Realizing he was not to have a future with her, he proposed to George (Georgie) Hyde-Lees a few months later. They married and had a son and daughter. He died on Jan. 28, 1939.
Following are some of his most famous poems. 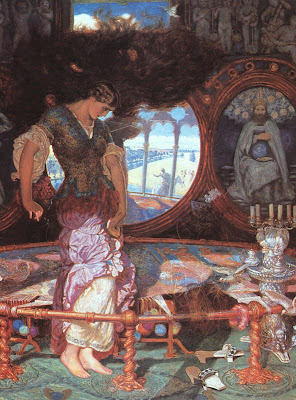 HE WISHES FOR THE CLOTHS OF HEAVEN


Had I the heavens' embroidered cloths,
Enwrought with golden and silver light,
The blue and the dim and the dark cloths
Of night and light and the half-light,
I would spread the cloths under your feet:
But I, being poor, have only my dreams;
I have spread my dreams under your feet;
Tread softly because you tread on my dreams. 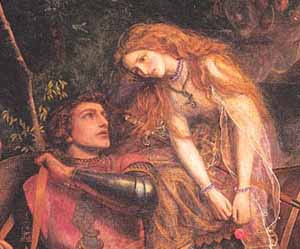 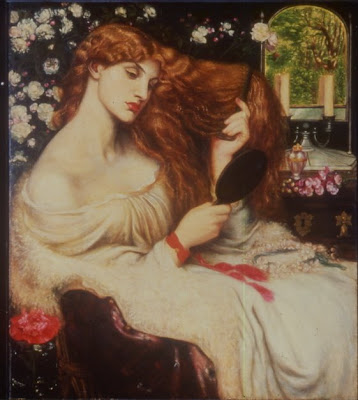 WHEN YOU ARE OLD

When you are old and grey and full of sleep,
And nodding by the fire, take down this book,
And slowly read, and dream of the soft look
Your eyes had once, and of their shadows deep;

How many loved your moments of glad grace,
And loved your beauty with love false or true,
But one man loved the pilgrim Soul in you,
And loved the sorrows of your changing face;

And bending down beside the glowing bars,
Murmur, a little sadly, how Love fled
And paced upon the mountains overhead
And hid his face amid a crowd of stars. 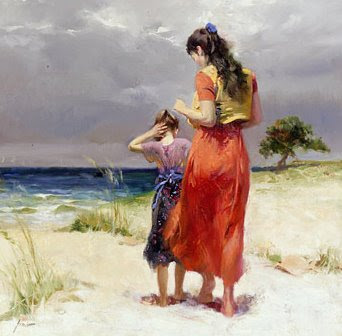 TO A CHILD DANCING IN THE WIND

Dance there upon the shore;
What need have you to care
For wind or water's roar?
And tumble out your hair
That the salt drops have wet;
Being young you have not known
The fool's triumph, nor yet
Love lost as soon as won,
Nor the best labourer dead
And all the sheaves to bind.
What need have you to dread
The monstrous crying of wind! 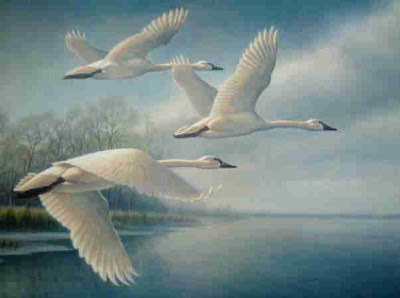 THE WILD SWANS AT COOLE

The trees are in their autumn beauty,
The woodland paths are dry,
Under the October twilight the water
Mirrors a still sky;
Upon the brimming water among the stones
Are nine and fifty swans.

The nineteenth Autumn has come upon me
Since I first made my count;
I saw, before I had well finished,
All suddenly mount
And scatter wheeling in great broken rings
Upon their clamorous wings.

I have looked upon those brilliant creatures,
And now my heart is sore.
All’s changed since I, hearing at twilight,
The first time on this shore,
The bell-beat of their wings above my head,
Trod with a lighter tread.

Unwearied still, lover by lover,
They paddle in the cold,
Companionable streams or climb the air;
Their hearts have not grown old;
Passion or conquest, wander where they will,
Attend upon them still.

But now they drift on the still water
Mysterious, beautiful;
Among what rushes will they build,
By what lake’s edge or pool
Delight men’s eyes, when I awake some day
To find they have flown away?

(This is a photograph of the actual Isle of Innisfree)

THE LAKE ISLE OF INNISFREE

I will arise and go now, and go to Innisfree,
And a small cabin build there, of clay and wattles made;
Nine bean rows will I have there, a hive for the honey bee,
And live alone in the bee-loud glade.

And I shall have some peace there, for peace comes dropping slow,
Dropping from the veils of the morning to where the cricket sings,
There midnight's all a glimmer, and noon a purple glow,
And evening full of the linnet's wings.

I will arise and go now, for always night and day
I hear lake water lapping with low sounds by the shore;
While I stand on the roadway, or on the pavements gray,
I hear it in the deep heart's core.

What wonderful poems, and as always I love the pictures, just popped over to see how you are, been so busy with the garden don't have much time on here now. roll on when it is almost done!!

Such beautiful words and so sad and deep the feelings...the art is perfect as well. Thank you and have a great (and loving) Monday :-)

These words ring so true to me:
I hear lake water lapping with low sounds by the shore;......
I hear it in the deep heart's core.

I just love poetry in the morning with my coffee.
Have a beautiful day.

Beautiful work, and the paintings too.
I've always loved the line
'tread softly because you tread on my dreams'
He sounds like he was a very sensitive man..
hugs
xx

Julie, you celebrate Irish culture so wonderfully... this is a lovely tribute to Yeats. He's one of my favourite poets too. I lived for 16 years in "Yeats country" - Sligo - and still visit his grave from time to time when I pass by. Thanks for sharing these and finding such perfect illustrations to accompany them. Blessings to you.

Dear Julie,
I always feel like I learn something new when I come to visit.
I enjoy Yeats too ~
I love that painting "Beachwalk!"

hoping this spring brings you lots of new joy.
yay for Spring!

beautiful poetry! on the mull of galloway, my mum has a tiny wee cottage and it is there we escape to when the modern world becomes too much, i am then always reminded of "innisfree", it speaks volumes. Your choice of pictures too, is just so. thank you x

Wonderful poetry! I feel like I've had a wee visit to Ireland!
I love the paintings too!

I had a high school English teacher that would quote a few lines of Yeats
all of the time…
He was a romantic and boy did I have a crush on him. However, years later I realized he was an ass…
It must have been Yeats that I really had the crush on, to be young again.

I so enjoyed reading this & so glad I've found your blog. I'm a calligrapher & 'Cloths of Heaven' is one of the most popular requests whether they know anything of Yeats or not! Thankyou.

Your site is magnificent. I enjoyed the combination of beautiful artwork and poetry. You are not an ordinary lady at all. I would say you have the hallmark of exceptional. Thank you

What beautiful poetry and stunning art to go with them. A pleasure to scroll through online...almost as pleasuralbe as talking a stroll through the woods on a lovely spring morning!

Julie - I noticed your post (which I've really enjoyed - thanks) when commenting on Cornflower's Yeats post today, and as you clearly love Yeats as much as I do, I thought I would expand on my own comment on Cornflower. My father and Michael Yeats, WB's son, were best friends at St.Columbas school in the 1930's - in fact like dad, Michael went into politics and was a Senator in Dublin when my father was PM in Northern Ireland. Anyway, dad used to go to the Yeats place during leave-outs from school, as it was closer than travelling to NI, and he often recounted the story of an evening when WB was prevailed upon to recite The Lake Isle at the dinner table. The poet would have been in his late sixties I think. Michael and my father kept in touch until my father's death in a riding accident in 1977, and Michael himself died only a couple of years ago. Mike