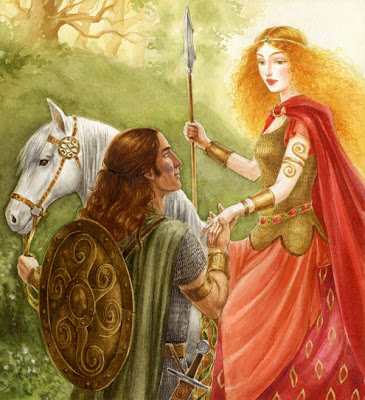 OISIN AND NIAMH by Bojani Dimotrovski
**********
I've shared in this blog before that I did not know about my Irish heritage until about four years ago, when I learned who my natural father was. Although I have always felt, subliminally, that I was Irish, after I found out the truth I consciously resisted it, for two reasons. One was that I was bitter that I had not known my father and consequently was ignorant of the Irish part of my ancestry. The second reason is that I really don't care for the image of the tipsy maudlin Irishman smoking a pipe, sobbing into his poteen, and consorting with leprechauns, or the one of modern Irishmen drinking green beer, wearing silly green hats and saying "Sure and Begorrah".

BRIAN BORU by Jim Fitzpatrick
**********
Then, a funny thing happened to me this winter while I've been underground in Persephone's cave. I have been spending a lot of time studying the Ancient Celts of Britain. I've been learning about their way of life - their homes, their medicines, their clothing, their jewelry, their beliefs. Part of it is for pure enjoyment, and part of it is research for a writing project I'm involved in. To my surprise I found my thoughts drifting across the Western Sea to Eiru, ancient Ireland. 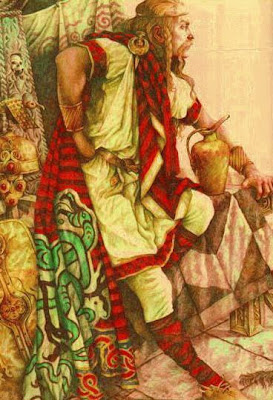 CUCHULAINN
(Artist unknown to me)
**********
I have begun to read some of the famous myths and legends of Ireland. Of Brian Boru, an actual person and the last of the Great Kings of Ireland. Of Cuchulainn - or Hound of Culann - a legendarily fierce warrior who, at the age of 17, defended Ulster single-handedly against the armies of Queen Medb (or Maeve). 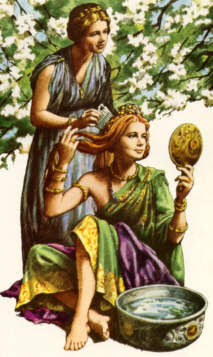 Edain
(Artist unknown to me)
**********
Then there are the so-often-sad stories of legend, including that of Edain, Deirdre of the Sorrows and Niamh and her lover Oisin. I have run across these names in my reading for years, but never learned the stories. I didn't even know how to pronounce Cuchulainn (coo-COOL-in) until recently.
After reading- and very much enjoying - these stories, I feel more connected to the land of my ancestors, Ancient Eiru. It seems as if I had to go back to the very roots of Ireland to feel that connection, that tug with the land. Now I feel proud to identify myself as Irish. 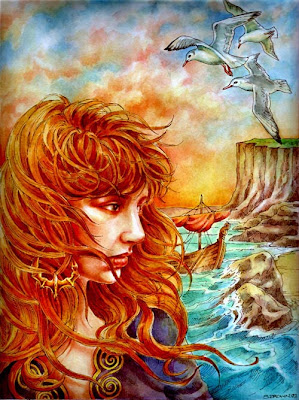 DEIRDRE OF THE SORROWS
(Artist unknown to me)

**********
Of course, there is so more to Ireland than the ancient myths and legends. There is no space here to even begin to tell the history Ireland, to describe its "terrible beauty", to quote William Butler Yeats: The potato famine and emptying of Ireland through out migration. The Easter 1916 uprising. "The Troubles". The partition of the island into Northern Ireland and The Irish Free State (later the Republic of Ireland), the tragedy of Northern Ireland. I did know some of this history, mainly through reading historical fiction, but I plan to include in my studies this more modern history of Ireland in the 19th and 20th centuries.
I did find a poem which very effectively condenses Ireland's history, and actually offers some hope at the end.
IRELAND, BORN AGAIN
Ireland, land of sorrowful lament
Green isle in a dark stormy sea
Ancient mystical Eire of Celtic culture
Poet, priest and passion abide here
Civilization among heathen cultures
in the green lush pastures,
Celtic crosses and tall round towers
Religion, ritual and revelry
Christianity, catholicism, tradition
Land of nurture and new birth
Rebels, writers, musicians
Famine, pestilence, poverty
Starvation and emigration
A legacy of a cruel crusade
A million dead, a nation vanquished
Suffering soulfulness among
the sour peat bogs
Untold misery and despair
Uprisen again, now a
new sense, born of untold suffering
Land of music, ballad
and dance, Celtic revival
Reborn in youthful creativity
Across the world, its suffering
spread, Celtic phoenix
New cultures, new traditions
But all the while
the ancient culture, in new
forms, revived
Risen from the fires of pestilence
and famine
Ireland, born again.


March 7, 1998
Michael David Coffey
**********
I plan to dedicate the month of March with posts about all things Irish and Celtic. I have plenty of material to share, so if you're not interested, see you in April!
But if you do like such things, here are links to the legends I mention:
Deidre of the Sorrows: http://www.camelotintl.com/heritage/myths_legends/deidre.html
Cuchulainn: http://www.shee-eire.com/magic&mythology/Warriors&Heroes/Warriors/Males/Cuchulainn/Page1.htm
Brian Boru: http://www.ireland-information.com/articles/brianboru.htm
Oisin and Niamh: http://www.babynamesofireland.com/pages/niamh-oisin.html
Edain: http://www.libraryireland.com/AncientLegendsSuperstitions/Edain-Queen.php
NOTE:
I have deleted the sentence about Boudicca. I knew she was a British Celt, not Irish. I guess I was just having a senior moment. Thanks, Rowan, for setting me straight.
Posted by Julie at 7:44 PM

I'm very interested in all things Irish. I found out a few years back that my Grandfather's Grandfather was Irish.

Just popping over to see how you are, haven't been around for a while (feels like everything happening at once!), Love the art work in these pictures.

Oh Julie.....
Okay now you've hit my soft spot.
"Ireland."
I am SO GLAD you decided to go on and write about Irish things for March.
I too hate the "sterotypes" that are associated with the country. But all one can do is try to counter act those things by showing the other...."positive" sides of Ireland.

Because there is SO MUCH history and tragedy regarding that land.

People only thinkg of "Green beer and potatos and foolishness" when they think of Ireland but it goes so much deeper.

And as one who has set her feet on the land...it gets in your soul and you can't shake the place nor the people. Ever.
I will always have a "stake" in Ireland.
When I went there it wasn't on a fun trip or a vacation...it was to make an "investment" in the people and do some work on behalf of "peace." We traveled into a very hurt area of No. Ireland.
*Hint...think "Bloody Sunday."

Many are working there on the behalf of peace and it's helped.

Now things are so much better in the North it seems...not perfect but better. I read the BBC every day and keep abreast of what's happening in the North of Ireland..because I care and I continue to pray for the country and it's people.

Legends and lore are part of Ireland that is true.

Yet the poem you posted stated WHERE Ireland has been and where it is going.
I loved it.
Thanks for including it in all that you stated.
You know you ARE a true Irish lady you know....it is in you.
Because you are indeed a great story teller.
The Irish are very artistic and gifted in so many ways...song, music, dance..and STORY TELLING.

Your right there my friend....use your gifts for good and help change the world. It may be little by little...but it can make a difference.

Th eimages you use are always amazing!

Thrilled with your plan of Irish inspired posts. I know you do your homework. Julie...the thing I love about my Irish heritage is their gift of gab,great sense of humor and that twinkle in the eyes. Only the strong survived so all of us Irish come from some hearty DNA!
Love ya

This was a really special post. I am looking forward to knowing more.
I have learned so much from you already.
I will be right here taking in the Irish. And since I and my husband have Irish running around in our genes, this is wonderful.
Also yes, I would love to make some charms, just need to know what they want or a graphic.
I have ended Ruth. It was hard, but I need to move on. Your, Mary
We have snowing coming...It was a heck of a storm today in some parts of this valley.

I also am interested in reading your post too. I grew up in an Irish Catholic family on my mother's side and a German Luthern on my father's. Yeeks! What a combination LOL Regardless, I'm glad for all of the cultural experiences I've had on both sides.

I love your blog - the colors are just wonderful. I have been very 'blah' lately due to the winter and I can't wait to get out and GARDEN! Your photos 'warmed me up'. Thank you for sharing.

I have always felt the calling of the Celtic side of my ancestry, more so than the English and German. It pulls at my heart and is deep set in my emotions. I am so looking forward to joining you on your journey this mont.

Thank you for your lovely comments, it is heartening to know that someone else out there is visiting. Margaret

Beautiful - from an Irish Colleen to you- glad to have ya in the clan!!

Looking forward to your posts on Ireland, my DH has a lot of Irish ancestry but sadly I have none at all. The old Celtic myths are wonderful but you can't have Boudicca as Irish I'm afraid - she was queen of the Iceni tribe who lived in what is now East Anglia - ie Norfolk, Suffolk etc. A British Celt but from this side of the Irish Sea:)
Thanks for your comments on my blog, George is doing pretty well now though his lungs are still very weak. Hopefully he'll continue to get stronger now.

Julie, I discovered your blog on the way to creating a crochet pattern based on Deirdre's story (I have one started for Queen Meadhb already). Thanks for the lovely image! It's actually a great help.

For the record, you have your Irish (Gaelic) a bit skewed. "CEUD MILE FAILTE" should be spelt "Cead Míle Fáilte", and means "A hundred thousand welcomes", and secondly, no-one calls the language "Gaelic", it's just "Irish". : )

It's good to have you in the clan, though. Beanachtaí 'gus sláinte duit!

The greeting is spelled both ways - ceud and cead. I'm not going to get into an argument with you as to which is "right". I know that it means "a hundred thousand welcomes", I just shortened it. And finally, yes, it is called Gaelic, with differentiation made between Irish Gaelic and Scottish Gaelic.

Very beaultiful blog you have. Love the artwork . I saw you mentioned the famine, and I thought you might like to do some reading here if you haven't already: